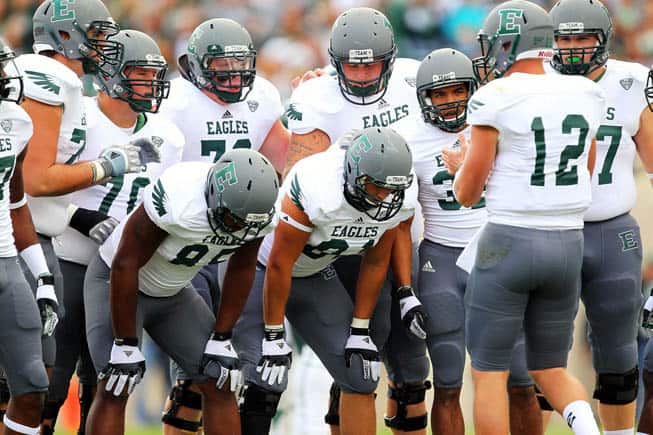 Eastern Michigan’s 2014 non-conference schedule is now complete with the addition of the season and home opener against the Morgan State Bears on Aug. 30 and a trip to face new C-USA member Old Dominion on Sept. 13.

EMU previously announced 2014 non-conference games at Florida on Sept. 6 and at Michigan State on Sept. 27.

The 2014 game at Old Dominion is the front half of a home-and-home series with the Monarchs. The second and final game will be played at Rynearson Stadium in Ypsilanti on Sept. 5, 2015, which will be the season-opener for both schools.

Eastern Michigan now has a tentative date for their Celebration of the State home game against the Michigan State Spartans. The game is currently set for Sept. 12, 2020 after previously being listed as “2018 or 2020.”

The Eagles have faced Michigan State nine times in their history, with only the first game in 1898 being played in Ypsilanti.

I suspect that 2020 game against MSU will be moved to Ford Field or maybe even to East Lansing. If so this would be the biggest EMU payday ever.

I would hope that MSU actually plays at EMU since this game is part of the “Celebration of the State” series.

I would love to go to the State at Eastern game.