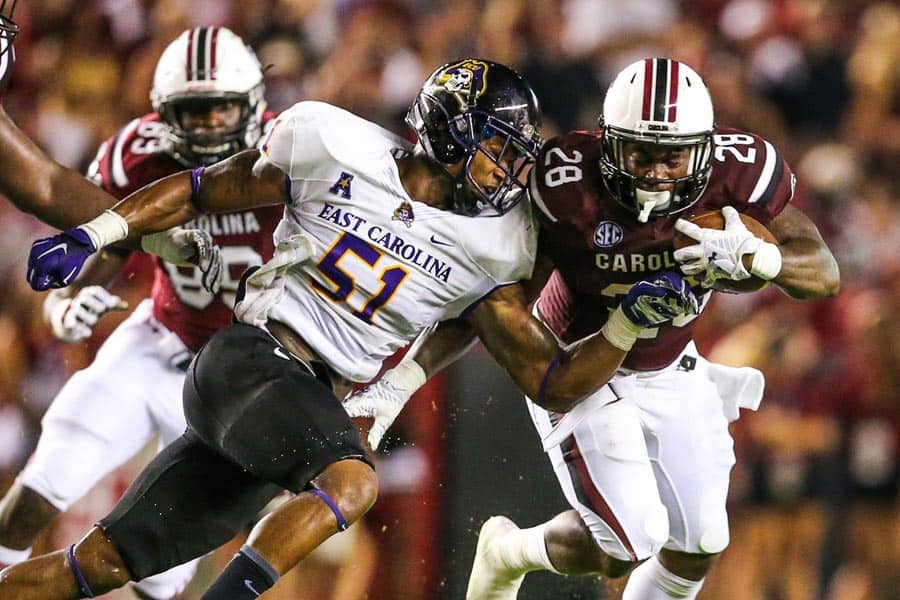 The East Carolina Pirates and the South Carolina Gamecocks are scheduled to meet four times between 2016 and 2021, FBSchedules.com has learned.

The 2011 and 2012 games were played as scheduled. Then a new contract was signed by both schools in April 2014 that superseded the previous contract, according to a copy of the contract obtained from ECU via a public records request.

The new contract, which also called for a five-game series, moved the previously scheduled 2014 game in Charlotte to Columbia. ECU received a $1.2 million guarantee for that game.

There are now four games remaining in the series. Listed below are the years and the guarantee for the visiting team:

East Carolina and South Carolina have met 18 times in a series that began in 1977. The Gamecocks lead the overall series 13-5 and have won the last three meetings.

This is stupid. Just like Penn State who just scheduled Idaho. I’m done

Idaho can only wish they were anywhere near what ECU is in Football. This is not a bad series at all. Have you watched college football in the last 20 years?

This is a great match-up, with the games between these two in the past this was bound to happen, E.Carolina always plays S.Carolina tough.

Yes, I do realize it enabled BYU to schedule Michigan State home and home.

South Carolina is scheduling so they don’t have to play an OOC game outside of the Carolina’s.

Hey! Check out East Carolina! They are going to surprise some people this year. And, they just signed a four year home and home with South Carolina! Yes, they love to play in the sandbox with the big boys, and that is because they are bigger than people give them credit for. Before you argue, look at the stats and the stadium expansion plans! Big time stuff! Aaargh baby! It’s fun to ‘party with a pirate!’!

Unfortunately ECU just lost their starting QB for the year.

ECU is scheduling teams that will put them on the map and show the US that they are a great institution.

ECU is a solid mid major program in a solid conference. The AAC top dogs are becoming more comparable to top P5 programs giving solid P5 programs headaches on the field. If they continue getting better, and attract more high grade recruits, ten years down the road I can see them considered a power conference.