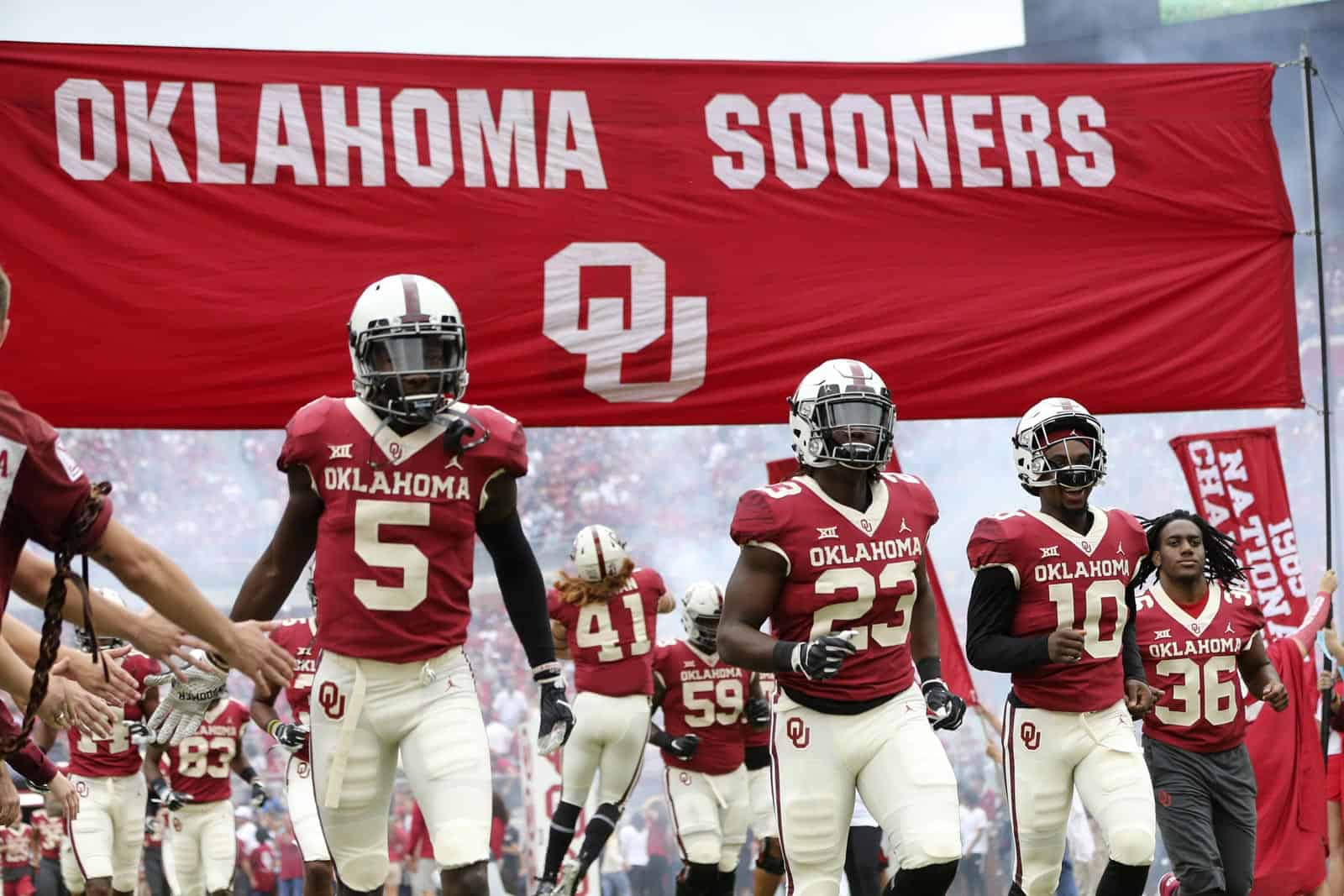 Though ten years from now seems like a long time, 2029 will be here before we know it.

Think about it this way, do you remember when (2) Texas met (1) Alabama in the BCS Championship/Rose Bowl? That was the game when Longhorn quarterback Colt McCoy got injured in the first quarter and was replaced by Garrett Gilbert. After being held scoreless for the first 15 minutes, the Crimson Tide reeled off 24-unanswered points in the second stanza and never looked back, ultimately beating Texas 37-21. That season’s Heisman Trophy winner, Alabama’s Mark Ingram II, rushed for 116 yards and two scores.

Despite seeming like it just happened, that game was a full decade ago – wrapping up the 2009/10 season.

What follows are a dozen future blockbuster matchups that are scheduled for at least two seasons from now, or from 2021 through 2030. They aren’t one-time-only kickoff games, instead each is a home-and-home series slated for back-to-back years.

That’s 89-years of in-conference action that ended when the two schools met for the last time in the 2010 Big 12 title game. The then (10) Sooners edged the (13) Huskers in that final meeting, also Oklahoma’s fifth win in six tries.

Despite their campuses being only 250-miles apart, these two giants have only met six times previously with only four coming in the regular season.

The Irish and Aggies last met in a home-and-home in 2000 and 2001, the host team winning on each occasion. The balance of the five-game series came in three Cotton Bowls played in a seven-year span. Notre Dame won in back-to-back appearances in 1993/94 and 1992/93 and Texas A&M was victorious in the 1987/88 game – also the first-ever meeting between the two schools.

The 2025 game between Clemson and LSU will mark the first time the two Tigers have during the regular season. The three previous matchups came in the 2012 Peach Bowl (a narrow 25-24 Clemson victory), the 1996 edition of the Peach Bowl (a 10-7 LSU win) and then the 1958/59 Sugar Bowl (a 7-0 LSU win). The Sugar Bowl win over Clemson sealed the deal on LSU’s first-ever national championship.

Michigan and Oklahoma have only met on the gridiron once in history, in the 1975/76 Orange Bowl. The then (3) Sooners edged the (5) Wolverines 14-6, capturing the fifth of their now seven national titles.

Another first-time regular-season meeting between two Powerhouse programs, the Tigers and Sooners have only clashed twice, both occurring in the postseason. The most recent matchup came in the 2003/04 Sugar Bowl, a 21-14 win for LSU. That victory earned the Tigers their second national title. Before that, it was all the way back in the 1949/50 Sugar Bowl a 35-0 shutout for Oklahoma. That win capped a perfect 11-0 campaign for the Sooners, who despite running the tables finished No. 2 in the final AP. Notre Dame, Cal and Army also went undefeated during the regular season, the Irish were awarded the national championship despite not participating in a bowl game.

A rematch of the 2012/13 BCS Championship (a resounding Alabama victory) as well as the 1974/75 Orange Bowl and the 1972/73 Sugar Bowl (both wins for the Irish), the 2028/29 home-and-home represents the fifth time the two powerhouses have met during the regular season. The 2029 game will be the first-ever game in Tuscaloosa.

The two met in a home-and-home in 1986/87 but the Alabama portion of the game was played in Birmingham. The only-other regular-season action came in 1976 (in South Bend) and 1980 (again in Birmingham). Notre Dame leads the series 5-2, the Tide’s only win besides the BCS title game coming in the 1986 meeting.

If this one looks familiar, it’s a rematch of the just-featured 2018/19 Sugar Bowl – a 28-21 upset win for Texas. That game was the first time the two schools had met since the 1983/84 Sugar Bowl, a narrow 10-9 Georgia victory, also its only win in the five-game series.

Clemson and Georgia have met a whopping 64 times during the regular season, a series that started in 1897 and was last played in 2014. The two schools are located a mere 74 miles apart and briefly shared membership in the Southern conference from 1921-32.

The 15-year gap between their last on-campus meeting and the scheduled 2029 game will be, if it holds, the longest in series history. Georgia holds a dominating 42-18-4 lead and has won six of the last seven.

Common theme is that is either a Big 12 or Big 10 involved or possibly ND. Pac 12 too good for a home and home? Where is Florida St?

Florida State has no home-and-home’s scheduled other than the annual Florida series.

Auburn, Alabama, LSU, Georgia and Texas A&M are not Big 10, Big 12 or Notre Dame. They are a pretty big part of the equation Jerry.

Actually, if you count them, the SEC is involved the most games listed in the article:

Texas could easily have had 4, if you wanted to include their Michigan home-and-home.

I sure hope this the start of a deeper trend on several levels. First I like seeing these huge out of conference games at college stadiums! 2nd the very top teams believe they can risk a loss for the chance at a big win to help make the playoff. However if the committee continues to reward teams that do not take this scheduling risk then these games will not be a trend but in danger of being canceled.

I think Tom’s is touching on an excellent point here. The vast majority of the schools listed above likely assume that one early-season to top tier opponent isn’t going to hurt them, given their tradition, brand, conference, etc. If LSU loses to Oklahoma, but wins the SEC, they are in. If Ohio State loses to Texas, but wins the test of their games (and thus Big 10 by definition), they are most likely in.

However, replace these schools with teams like Michigan State, Virginia Tech, Washington or TCU, and it becomes much more questionable.

Pac-12 too good for home and homes? Do you live in an information bubble? Did you not know Georgia and Texas A&M cancelled home and homes with Oregon. Auburn and Georgia will only play Oregon on so-called ‘neutral’ fields. Alabama will only play USC on a so-called ‘neutral’ field. Besides LSU, SEC has been afraid to fly to the Pacific Northwest. Seeing some change in attitude now with Mississippi. Auburn and Georgia playing home and homes with California schools. And Mississippi St has home and homes with the Arizona schools. And LSU and Texas A&M has a home-and-home with Arizona St. Since USC and Stanford play Notre Dame every year they have no need to schedule a second P5 OOC game. But they often do it. Oregon and Washington have home-and=homes with Ohio St, Michigan St and Michigan.

How about an article on which SEC teams won’t play specific other teams in home and homes.

No mention of Florida never playing non conference games in opposing teams stadium outside the south since 1991.

The author picked what she deemed the 12 best upcoming home-and-homes. This was not intended to list out every future home-and-home series.

any word on the proposed LSU/FSU games for 2022-23? Have they been confirmed?

Nothing official since the first report.

When will Tulane and LSU resume their storied series ?

When will Tulane be re admitted to SEC?