Does the Pac-12 Have the Toughest Schedules in College Football? 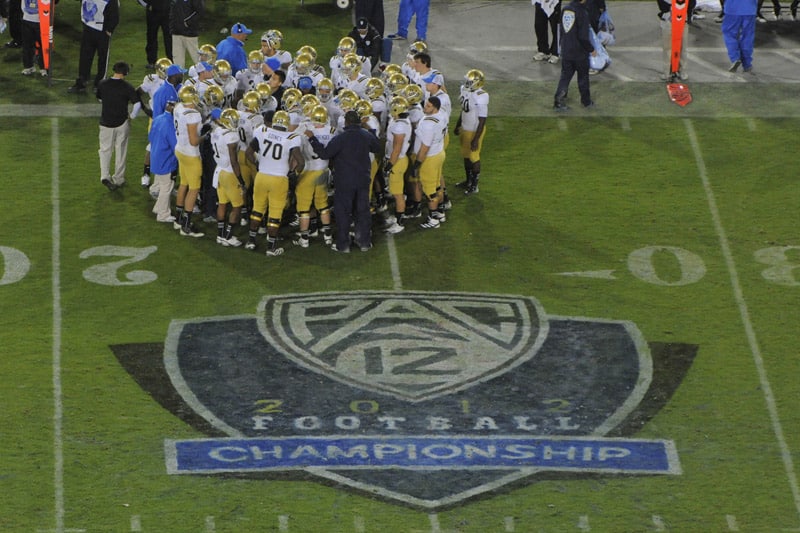 Recently Oklahoma’s Bob Stoops justified the lack of a title game in the Big 12—it’s the only power-five league that doesn’t play a championship game—by saying that at least each team plays every other team in the conference on an annual basis.

According to Brett McMurphy of ESPN.com, here’s what Stoops had to say:

Think about it: mathematically we play everybody, they [the SEC] don’t play everybody…For instance Texas A&M. They play eight conference games.

They have Lamar, Rice, SMU and Louisiana Monroe. Boy those are all a bunch of toughies, right? We have nine conference games. So if [Texas A&M] was fortunate enough to be in the SEC championship game, they would play nine conference games at the end of the day and they have all those four ‘toughies’ to go with it.

We have nine conference games and we’re playing Tennessee. In a few years we have Ohio State, we just came off a series with Notre Dame and Florida State. So that’s like 10 conference games. If you’re playing a tough non-conference schedule to go with nine [Big 12] games, that’s a tough schedule.

If Stoops’ logic holds true—and playing nine conference games makes up for not having to play a league championship game—then the Pac-12 has the toughest schedules among the power five leagues.

Well, even though Pac-12 members don’t play every other member annually—the conference is too big to do that—it is the only power-five league to play a conference championship AND play nine league games each year.

The ACC and SEC have said they won’t move to nine games, instead sticking at eight and adding in a requirement that at least one of the non-conference games be played against another power-five team.

As for the Big 12, as Stoops’ asserts members do play nine league games (against every other member, even the ones who struggle) but they still don’t play a league title game. This represents one fewer game against a top-tier conference opponent.

To illustrate, take Baylor, who did play every other Big 12 member last season on the way to its first conference title since 1994. But, if they would have been tasked with a league championship game—like Arizona State and Stanford did in the Pac-12—the Bears would have had to win a rematch with Oklahoma State to take the title.

Instead, they finished the regular season with a win over No. 23 Texas, sat at home with an 11-1 record and waited while the Pac-12, Big Ten, ACC and SEC all pitted their two best teams against each other.

And yes, this “extra” game counted in the final BCS tally that decided which team would go where in the postseason. So while Baylor didn’t have the benefit of a potential win over a ranked opponent in a title game, it also didn’t run the risk of losing an additional game.

Using Stoops’ logic, Pac-12 members, if they are “fortunate enough” to be in the conference championship, would play ten league games. Taking his approach one step further, Pac-12 teams in the title game that also have non-conference games with big-time, power-five opponents are playing 11 conference games (in 2014 USC and Stanford have Notre Dame, Oregon has Michigan State, UCLA has Texas and Utah has Michigan).

That’s at least one step beyond the Big 12, the SEC and the ACC.

That leaves the Big Ten, which currently falls into the same category as the SEC and ACC (eight league games and a potential conference championship game), but that is all set to change. Yes, the Big Ten is slated to add an additional league game in 2016, moving from eight to nine.

This means that for now, the Pac-12 does have the toughest scheduling scheme among power-five leagues and, two seasons from now, the Big Ten will join them.

Until that schematic flaw gets resolved, strength of schedule will be even more important, especially in the eyes of an all-human selection committee.

I know some people will comment back and state that Baylor did play Texas the same weekend as the B10, ACC, SEC, and PAC played their championship games, which is true. But because they played their 12th game on the final weekend, while others played their 13th, they also benefited from an extra bye week. Still one less chance to lose a game, something other conference champions don’t have the benefit of…

This article has some very solid points. I agree with it…

Well I’d say this makes perfect sense. Can’t wait to see who comes out on top in the PAC-12 this year!

Extrapolate the same logic to individual teams, then Florida State is slated for the toughest schedule in the nation. One game is against an FCS opponent. Okay, fine. The remainder of the schedule consists of eight against the ACC, one vs. Power team Notre Dame, one vs. Oklahoma State, one vs. Florida, and one vs. a ninth ACC, if FSU wins its division. That’s 12/13 games against teams from Power Five conferences and Notre Dame.

Also Notre Dame, OKState, and Florida should all be tough opponents. FSU may arguably have the toughest Non-conference schedule this season.

Agreed. I think with the OOC schedule, they would make the playoffs even if they slip up once in the ACC.

Its who is tough during the season and rivarly games not the number of games etc. Michigan State has had a lot better teams tnan last year that went 8-3,9-2,10-1 but lost big games with a tougher schedule. Last years was really weak but they had a great Year! This years i s harder and if they beat oregon watch out for Sparty as a good QB,RB and defense! They have played great the past 5 years and still get no respect!!! UM has been mediorce and ND but they get all the press. FSU has great pass defense and recievers and QB will not get any better. A good defense like Alabama, Auburn Oregon and Msu would beat them by 14-17 points. Way overrated !!! People forget old rivarly games make a conference tough as the schools have played each other 100 years like Big 10 and Pac 12!! No one remembers ND games out east in bb or football. They should be in the Big 10 but they know they would get beat up like Penn State has since joining ..ND gets all these boys who play at Christian academies and they just are not as tough as public school players–thats the culture at those places and an arrogance that you can be #1 because God is on our sie and I believe! By the way I live in South Bend and the official gave ND the Gane vs MSU 5 bad calls all at a key time If State got 1 of those bad calls they would have won by 10-14 as all phantom calls and even the pro ND announcers said that!!