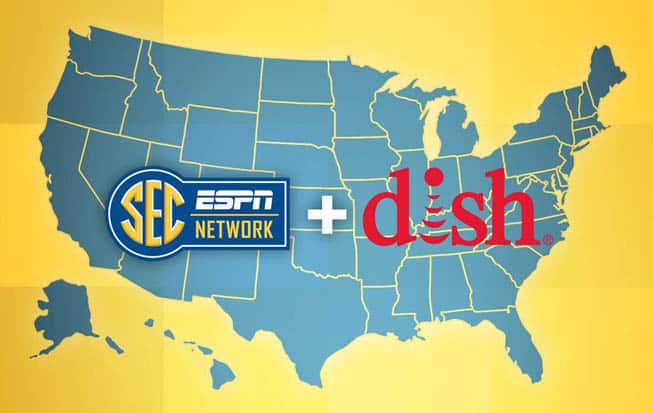 College football fans that have Dish Network can rejoice! ESPN and DISH announced last night that they have reached an agreement for DISH to carry the SEC Network at launch.

“Few fan bases rival the passion and loyalty of the SEC, and DISH is proud to be the first nationwide television provider of the SEC Network,” said Dave Shull, DISH executive vice president and chief commercial officer. “We strive to give our customers and consumers what they want, and there’s no better place for the college sports fan than with DISH.”

“This is an important day for the SEC Network. We are pleased to welcome DISH to the SEC family,” SEC Commissioner Mike Slive said. “More than five months ahead of the network launch, it’s exciting to have a national distributor and our first satellite provider onboard. Now SEC fans from across the country have another way to show their conference pride and sign up to get the SEC Network.”

With the addition of DISH as a carrier, the SEC Network now has three total providers – DISH, AT&T U-verse, and National Rural Telecommunications Cooperative.

Great news….now if we could just get Dish to carry ESPNU and ESPNews in HD!

From the “DISH and Walt Disney Company” link:

“As part of the agreement, DISH will launch ESPNEWS, ESPNU, Disney Channel and ABC Family in high definition. ESPN Classic will be reintroduced as a video-on-demand channel.”

thanks for the update Jason

Apologies for being slightly off-topic, but the Dodgers and Time Warner started their own channel for the 2015 season. So far no one but Time Warner is carrying it. Dish, DirecTV, UVerse, Verizon FIOS, Comcast and Cox have all said no. Opening day is 2.5 weeks away

sorry Bill but I live 20 miles form the Rays AA team (Montgomery Biscuits) but I never get to see the Rays, I am force to watch the he Braves…why? Does anyone in TV land care? No! You are in The Braves market so you must love the Braves!!!!! I like Chipper but he retired. I want to see the kids play in the majors that I got to see play at Riverwalk Stadium. At least the Rays come to Montgomery on 3-29-14 to play the Biscuits.

You can get a lot of out of town games on the ESPN Extra Innings package. I’ll bet you can get somewhere about 130 Rays games, although some wiil be opponents feeds. I live in Los Angeles and I can not watch the Dodgers at any price. Other than a few ESPN and Fox Network games I am out of luck.

WHERE IS THE BIG TEN NETWORK??? NEED TO HAVE THIS ALSO!!!

Chill out and stop shouting. BTN has been on Dish (Channel 439) since it’s inception. The extra games are scattered between channels 5440 to 5450.

Dish has also had Pac 12 since day one….it is DirecTV that fights the college channels

I am very upset with Dish because they have Marshall listed as playing on 5 different channels and everyone of them have WVU playing instead!!!!