Derek Mason to Stanford: “Come and get us” 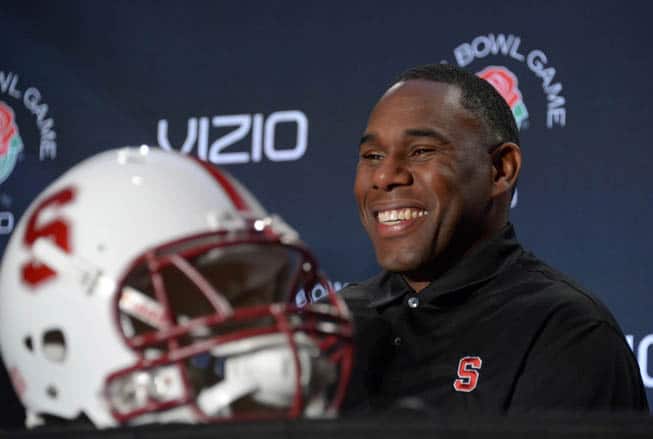 Although Vanderbilt and Stanford are nearly 2,300 miles apart, the two schools have a lot of similarities. They each boast exceptional academics and successful athletics programs in power five conferences.

Moreover, new Vanderbilt head coach Derek Mason was an assistant coach at Stanford from 2010 through 2013.

Now that Mason is in Nashville, it’s only fitting that the Commodores and Cardinal get together on the gridiron. That’s never happened before, but could in the near future.

“We’re in the process, right now of scheduling that game,” Mason said on WJOX radio in Birmingham. “Listen, we understand the two schools have similar brands, but they don’t fear anybody, and we don’t either. We’ll get a chance to get after Stanford, and they’ll get a chance to get after us at some point in time, hopefully in the near future. We are still the best conference in the whole United States. If they want to come and get us, come and get us.”

If the game or games are scheduled, it would give Stanford head coach David Shaw a chance to back up his heated words from earlier this month.

Speaking on a Pac-12 teleconference, Shaw said that the SEC shouldn’t “back down from playing your own conference.” Shaw also said last year that the SEC plays “cupcakes” in November.

Shaw’s words followed the announcement that the SEC was sticking with an 8-game scheduling format. However, the SEC added a strength of schedule stipulation that require each team to play a power five non-conference game each season beginning in 2016.

Vanderbilt, which improved under then head coach James Franklin, has only played one Pac-12 team in their history. The Commodores fell to UCLA 28-21 in 1961 in Los Angeles.

Barring a postponement or cancellation, it looks like 2018 or later will be the first chance for Vanderbilt and Stanford to meet in the regular-season. Stanford’s future schedules are filled through 2017, while Vanderbilt currently has future schedule openings beginning in 2015.

How is it now you can count Missouri and A&M with they were part of the Big 8/12. When Stanford played Missouri in 71 and A&M in 92. How does that carry over from one conference to the next?

The Southwest Conference fell apart after 1995 because all the teams were on probation. Arkansas was in the SWC and joined the SEC around that time. Then, the Big 8 took 4 teams from the old SWC to form the Big XII

lol nice ever since the power 5 opponent thing was put in place its an all out brawl between whoever comes first.

Stanford and Tulane and Vanderbilt and Duke need to play each other on a home and home basis.

Not Tulane. Tulane needs to join a P5 conference first.

Nawlinspete… You’re wishing for too much. Playing Tulane wouldn’t be very beneficial to the Cardinal’s SOS (and therefore playoff opportunities), compared to playing Notre Dame, Northwestern, Vandy, or Duke. Tulane needs to get LSU to play a home-and-home.

“Stanford’s future schedules are filled through 2017”.

For every season through 2019, Stanford is already playing two P5 programs in the non-conference. Do you think Stanford would entertain any thought adding a third P5 OOC game? Super doubtful. (And I doubt Stanford would add a P5 program to it’s 2020 schedule as they already have NW and BYU on the schedule). But if you think possible, why not in 2015 then, where both programs still have a TBA and Vandy is in dire need of a P5 OOC match-up. I think this is what Mason is shooting for. At any rate I doubt you will find Shaw coaching at Stanford for more than a few more years, so scheduling a match up far in advance would lose any significance.

Louisiana St was never an SEC team, they weren’t even part of the Southern Conference. Your history is wrong, History.

I recall that Stanford beat Alabama 17-14 when “Bear” Bryant was the coach……Plunkett did it.