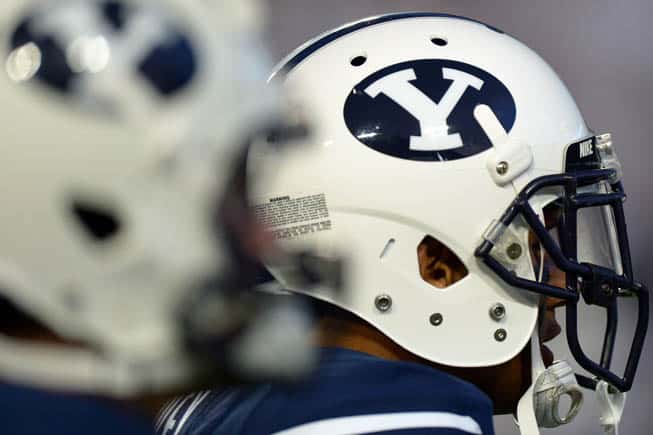 Dates have been set for the three-game Arizona-BYU football series in 2016, 2018, and 2020, according to a copy of the term sheet posted online.

The two schools agreed to the series last month and announced it jointly via a Google Hangout.

The first game of the series will be played on September 3, 2016 at University of Phoenix Stadium in Glendale, Arizona. Per the document, Big 12 officials will be utilized for this season-opening neutral site game. Other details of this game were revealed, including ticket allotments, sections, prices, etc.

If either school cancels the neutral site game, they must pay a $750,000 fee to the other institution and $250,000 to the Arizona Sports and Tourism Authority.

The 2018 and 2020 games will be played at campus sites. Arizona will host BYU at Arizona Stadium in Tucson on September 1, 2018. This will be the season-opener for both schools.

The third and final game of the series will be played at LaVell Edwards Stadium in Provo, Utah on September 12, 2020.

I would really like to see ASU book a similar deal with BYU, I know they have tons of fans in AZ. But this would still be a great series for Sun Devils fans as well. Kudos to U of A, ASU Athletic Department lets get ‘er done!

UA did a great job on this one. A big time opponent home and home, while getting a drivable neutral game location.

Note the use of a Big 12 officiating crew for the neutral site game in Glendale. I have a feeling that comes more from BYU as part of their agreeing to a 3 game deal. Common sense indicates BYU will be part of that league in the later years of this decade.

big 12 will not exist in 20 years. there only shot is to be in pac 12. If the big 12 does exist there are not going to have a team in West Virginia and Utah.

Well not a single player on either current team was there for any of those games, and many current players will be gone for the 2016 game. This means less than nothing.

Makes you wonder why they didn’t announce the specific dates at the original series announcement.

Some schools prefer not to announce dates that far into the future because they can always change.

I’m very excited for this as a U of A fan. Big-time opponent with a big fan base. I love the neutral location because I think it will be a true neutral game, a rare sight in today’s college football world. We have lots of Wildcat fans in the Utah area and they have a ton of Mormon fans in AZ. I would love to see this become a regular occurrence. Their fans are all class, too.

Kind of a head-scratcher that BYU would schedule what is basically a 2-for-1 in favor of Arizona, that all three games will be played in early September, and that the first two games of the series are in Arizona. I would understand scheduling this way against USC or Oregon but, no offense to Arizona, but Arizona just isn’t worth this sort of deal in my view.

I have heard BYU has about 300,000+ alumni in Southern California and in Arizona another 200,000+ that is why they are ok with scheduling a series like this. Some think they will outdraw The University of Arizona in their own state. I know that as a BYU fan, I will travel to this game and I anticipate it to be 40-50% Cougar fans just based of previous games in California and Nevada.

This is exactly my concern! You have a base of over 200,000 fans who have to normally fly to see their team. Now they can drive in 20 – 30 minutes to see them. Their team hasn’t been here for 6-7 years. They will go to this game.
Conversely, you have a team that is used to driving 20-30 minutes to a game that now needs to leave in the AM and get back late in the PM to see their team. My concern is they will go to the driving range and just watch it on TV.

While 200,000 might not be exactly right (seems too big) UoP Stadium will almost surely be a BYU majority. 55/45 or 60/40 split. UoA Students will not travel as well to Glendale as they will to the home game but BYU fans will flock since they are never down here. There will also be a lot in Tucson more than they are used to I am sure but not enought to overwhelm the home crowd. I’m a BYU alum in Tucson. I will be at both.

@Brett Phoenix has the largest University of Arizona alumni base outside of Tucson, and I think its close. They will not need students to drive up and watch this game to be the majority here

That is a major concern to me as a Wildcat. We will need to step up our game, we can’t just expect this stadium will be 90% U of A and 10% BYU. They travel thousands of fans and they already have a ton of fans in Phoenix and surrounding areas. Should be fun, but if we decide not to travel, it could wind up being a road game in our State.

200,000 represents the approximate number of Mormons in the area. Not all of them are football fans, and not all the LDS football fans are BYU fans. So that’s sort of a top-end figure. But yes, there are a lot of BYU fans in Arizona, so BYU should represent well and make up a large minority of the crowd, maybe even approaching 50%.

All they need is 65,000 of those the byu football fans to fill the place.

Why won’t Arizona schedule Boise State? I have sources who tell me they have turned down Boise several times over the past few years. Is it fear?

Jon, thanks for your kind words regarding BYU fans, but we have nothing over on Arizona fans. I recall when Jimmer scored 49 points at Arizona and was so impressed with the class of the Arizona fans, giving him aplause as he left the game. That’s great sportsmanship. Nobody likes to see their team lose, but the class you display in losing says a lot about who you are. So, I too am hopeful that this rivalry can continue well beyond this series.

I am a season ticket holding BYU fan and ASU alum… I would LOVE if they did that! I would definately travel to Tempe if it happened.