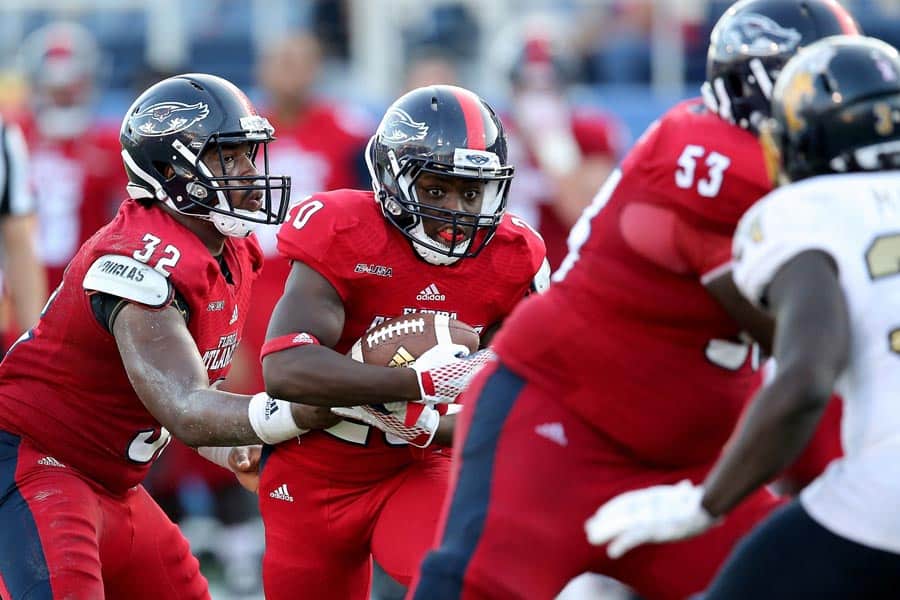 While some non-Power programs have a realistic shot of upsetting a big-time school (think Boise State and UCF), others don’t have a fighting chance.

It’s a statistical fact that makes big-school vs. small-school match-ups a win-win only in the sense that the big dog gets awarded an almost automatic victory, while the little dog gets to cash a huge paycheck.

It is the nature of big-time college football.

The following list highlights 11 little (or littler) guys that won’t just roll into town to get slaughtered in front of a hungry crowd once this season, they’ll do it at least twice.

App State draws both an SEC and ACC foe in 2016, the first time it’s played two Power foes since it moved up into the FBS in 2014.

One of only three schools on our list to have three Power opponents in 2016, East Carolina is set to face two ACC members and a SEC team.

Keep in mind that FAU didn’t field a football team until 2001.

Another relative newcomer, Georgia Southern didn’t move up to the FBS ranks until 2014 when it joined the Sun Belt. Like FAU, the Eagles’ last win over a Power team (the 2013 upset at Florida) was also their only-ever victory over a Power opponent.

The second of the three teams with a trio of Power opponents in 2016, Hawaii is a combined 1-5 all-time vs. Cal, Michigan, and Arizona. The only win came in 1994, a 21-7 triumph over the Golden Bears in Berkeley.

Kent State is 1-16 all-time vs. the current Big Ten. The only win came in 2012 at Rutgers, but the Scarlet Knights were still Big East members at the time. That means it has never beaten a Big Ten school that was a conference member at the time the game was played.

2016 Non-Conference Schedule: Southern, at Oklahoma, at Auburn, at New Mexico

ULM was equally as ambitious in 2015, playing at Georgia and at Alabama during the first three weeks of a season that ended with a 2-11 mark.

Though it’s no surprise that Rice has its 81st all-time meeting scheduled with Baylor (an old Southwest Conference chum) it hasn’t faced Stanford since 1964.

Doubling-up on what Rice has in 2016, SMU is set to play two old Southwest Conference foes. The Mustangs have dropped 12 straight to Baylor, last winning in 1986 and has won only twice in their last 16 tries vs. TCU.

Most Recent Win over a Power Opponent: Never.

Another start-up program, South Alabama didn’t begin competing in football until 2009. That explains why it has only played a grand total of seven all-time games vs. Power programs.

The third of the three teams with a trio of Power opponents outside of league play, UConn is hardly a patsy. That said, the Huskies are 19-37-2 (34.5%) vs. the current ACC, the home of all three of its 2016 version of Murder’s Row.

I understand the record that E.Carolina holds but not sure if they should be under the slaughtered window, they are pretty good team that lost some close games last year & I could see them beating two out of three P5 they play this year. Not sure if Uconn will be getting slaughtered by Virginia, Cuse or BC either, Huskies might as well join the ACC if there going to play three teams OOC.

All good points, thanks.

I wouldn’t be surprised if UConn swept its non-American slate because all of them fall into the winnable category. As long as the Huskies do that, they won’t have to do much in American play to snag a bowl bid.

Did you mean USF or are you referring to the 2013 UCF squad? Because let’s not forget they went 0-12 last year.

UCONN plays BC,syracuse, and uva….they could be the favorite in any of those. And calling east carolina a sacrificial lamb is just silly….and dont think it really applies to App.St. or ga.southern either.

I enjoy this website quite a bit, but I have to question the logic behind this article. Was there any research done at all?

ECU’s last five games vs. The ACC: the Pirates have a 5-0 record. They’ve beaten NC State, UNC (twice), and Va. Tech (twice) over the last three seasons. Also, Last season, a mediocre Pirate team only lost by 7 at the Swamp to a much-improved Florida team. I’d hardly call that a slaughter, and Florida was far better than South Carokina last year.

No one should expect the Pirates to be an easy W, and to say they “don’t have a fighting chance” in those games is….. absolutely incorrect! Wow. I can’t believe how annoyed this article makes me.

Also, you do realize UCF is coming off an 0-12 year, right? Seriously.

If I want to see this kind of nonsense, I’ll go to Bleacher Report. FBSchedules, you’re better than this.

I’ll disagree a little, I think the article is looking at the over all record of these teams & what chances do they have to beat P5 on their schedules. I to noticed the E.Carolina & Uconn schools on here & said wait a minute but that the cool thing about the article, you can pick & choose the teams you think should not be on the list, may be UCF does not have a losing record & did not make the list for other reasons. They do play Michigan & Maryland…..well, Michigan anyway, might be a toss up with Maryland.

Ya…the lack of research in this article was rather striking.

This is a quote from the story: “The following list highlights 11 little (or littler) guys that won’t just roll into town to get slaughtered in front of a hungry crowd once this season, they’ll do it at least twice.”

It’s not supposed to be about historical records, and use of the word “slaughter” refers to a blowout.

Here’s another gem: “While some non-Power programs have a realistic shot of upsetting a big-time school (think Boise State and UCF), others don’t have a fighting chance.”

UCF, coming off an 0-12 year somehow has a fighting chance, but ECU and UConn do not? I didn’t even talk about UConn, but they’re quite possibly better than ALL FOUR of their non-conference opponents. Sorry, but this article lacks true research and is obviously written with a ridiculous P5 bias.

Georgia Southern returns the majority their offense and defense from a team that finished 9-4 and absolutely manhandled the 2015 MAC Champions (Bowling Green) in the GoDaddy Bowl. The Eagles are only going to be better in 2016 with added depth all around and a talented (albeit young) secondary that should contribute early. I’ll admit Ole Miss will be a tall order but Georgia Tech isn’t even our third toughest game this season. The first ever match-up between Georgia Southern and Georgia Tech occurred just two seasons ago (2014) where GS held a 3 point lead going into the last 30 seconds of the game…the ACC refs made sure GS didn’t leave with a deserved victory against the eventual Orange Bowl Champions. Fast forward a year later and Georgia Tech finishes 3-9…but wait, they’re Power 5! In summary, it appears the writer scanned the non-Power 5 landscape and circled each one that plays multiple Power 5 teams and slapped a blurb together. Not a lot of research done here.

I concur. That was most likely the strategy for determining who to put on this list. Georgia Southern and App State are not chumps, and there are a number of Sun Belt, MAC, and CUSA teams that are far more deserving to be on this list.

Don’t forget Georgia Southern against NC State in their first game at the FBS level. The Eagles led the entire game until the last drive. Also they took Georgia to overtime in Athens. They are far from sacrificial lambs. More like the little kid who blacked the bully’s eye on the playground.

I wouldnt be surprised at all if ga.southern beats ga.tech

Calling UConn and ECU “sacrificial lambs” against teams they should, and have recently, beat is misguided at best. And those aren’t even paycheck games, given that they’re part of home-and-home agreements.

I love this site, but this article is really lazy. And don’t give into the power five bias — leave that for ESPN.com.