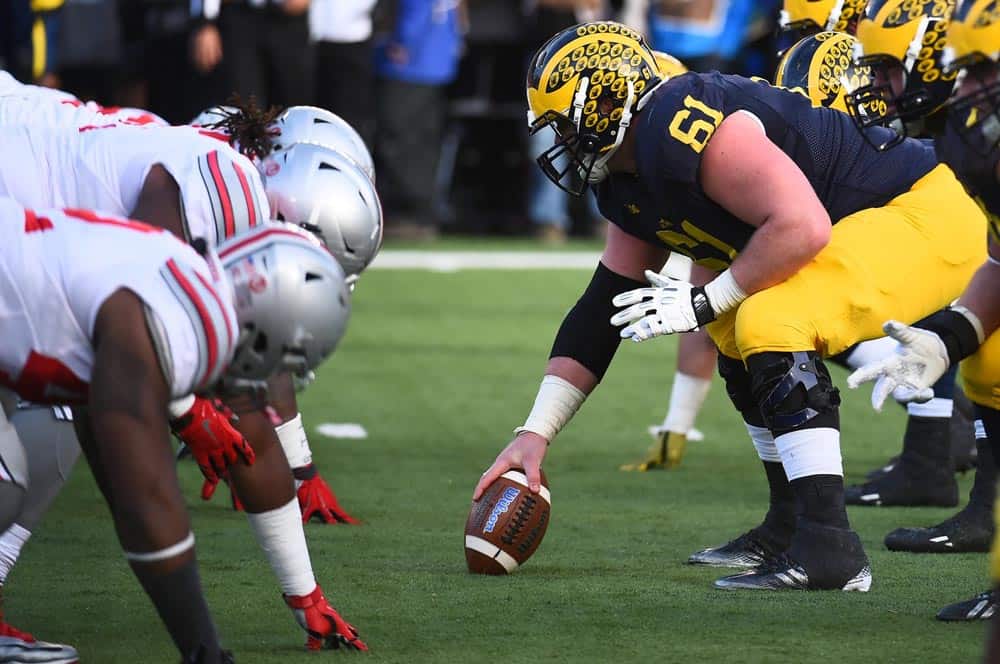 Some games were held under the six-day option. Those game times and/or TV have now been announced.

They put UM-OSU at noon when it could potentially decide the Big Ten East? That’s just wrong from a TV ratings standpoint. It needs to be at night.

Think about the fans on the West Coast though. Many OSU and UM fans in, say, California aren’t real thrilled with having to get up super early to prepare for what is a 9 AM kickoff in that state. With a night-time kickoff fans in CA aren’t pressured to get up so early.

With Fox taking part of the Big Ten contract next year it is likely they will have this game and will want it played at night especially for ratings purposes. November is a sweeps period after all.

Let’s go back to the 2006 UM-OSU game. Though the teams were both top 2 at the time it still only got a 3;30 PM slot while the inferior Cal-USC game (which USC won handily compared to the nail-biter nature of the UM-OSU game) was given the primetime slot instead. While the ratings for UM-OSU were good that year, they were stunted because of the game not being in primetime – a primetime playing of the game would have given it even higher ratings, surpassing even those of some recent LSU-Alabama games on CBS possibly.

I actually already had this response prepared because I knew what you were going to say:

Would 100,000 fans at the stadium want to sit for 3.5 hours in the cold night? I don’t think so, and I don’t think the players would either. Personally, living on the west coast, I like the early start time because it’s on not long after I wake up.

Big Ten night games are required to be scheduled before the season and both schools must agree for any night games in November. ABC/ESPN can’t unilaterally decide to schedule a night time kickoff in November.

There had never been a Big Ten night before 2014. The Penn State-Rutgers game this weekend will the latest into the season a night game has been played in the history of the Big Ten.

No other conference has that requirement and neither should the Big Ten. You have ratings to think about.

Yeah, because we all know that if there’s any conference that doesn’t know how to use branding and leverage, it’s the B1G. Great point.

Maybe its just me, but perhaps the UW/WSU game should be a saturday night prime time game. Just a thought.

If only the Pac12 schedule makers knew…
I remember a few years ago when the Pac12 schedules came out, and Oregon-Stanford was on a Thursday night, and I was made because I thought the game was too good to be a weeknight game. It ended up being a top10 matchup. I still went nevertheless, but the game lost its stature to Alabama/LSU because it was not on a Saturday.