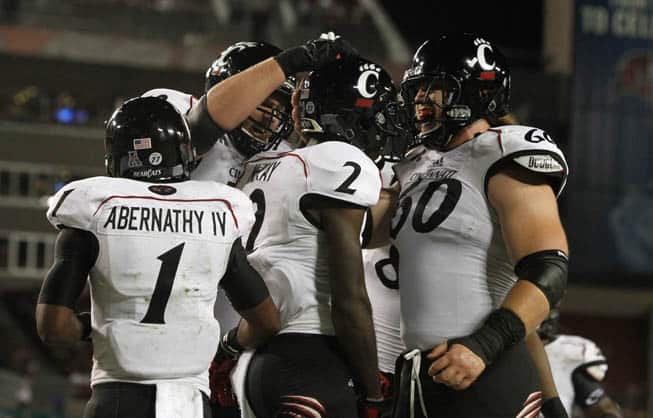 Though not quite as advantageous as actually playing in your home stadium, short road trips offer college football teams certain advantages.

First, there is the proximity to home which means fans can easily travel to the close road game, diminishing the host team’s home field advantage.

Next, short travel time equals less fatigue, fewer nights away in an unfamiliar bed and, if the game is near enough, nothing but a short bus ride for a team to have to endure.

Though the following 11 teams won’t play all their September games at home, they will play every single pre-October contest in their home state.

It’s a hidden scheduling advantage that could have some of these squads sitting pretty a month into the 2014 season. What they do next could go either way—they build on a solid start close to home, or they crash and burn after they leave state lines.

Iowa State opens up the 2014 season by hosting FCS North Dakota State, welcomes Kansas State in Week 2, travels 126 miles to play Iowa in Week 3, has a bye in Week 4 and then plays host to Baylor on Sept. 27.

The Cyclones’ first game outside of Iowa comes on Saturday, Oct. 4 when they travel to Stillwater to face Oklahoma State.

TCU not only won’t leave its home state in September, it will stay inside state lines all the way until November.

The Horned Frogs open up the season by welcoming FCS Samford, have their first bye in Week 2, host Minnesota in Week 3, enjoy another week off in Week 4 and then travel 40 miles to face SMU on Sept. 27.

TCU opens up October with a home date with Oklahoma, travels 85 miles to Baylor on Oct. 11, hosts Oklahoma State on Oct. 17 and Texas Tech on Oct. 25.

Purdue gets the ball rolling with back-to-back home games against Western Michigan and Central Michigan, travels to Indianapolis to face Notre Dame in Week 3, hosts FCS Southern Illinois in Week 4 and then welcomes Iowa in Week 5.

The Boilermakers will finally travel outside of Indiana on Saturday, Oct. 4 when it clashes with Illinois in Champaign.

Cincinnati is the only FBS team in 2014 to start the season off with two bye weeks. The Bearcats’ opening game is delayed until Friday, Sept. 12, when they host Toledo at Paul Brown Stadium in Cincinnati. Next up is a home game against Miami (Ohio) followed by a 100-mile road trip on Sept. 27 to Columbus to face Ohio State.

Cincinnati stays in Ohio for a Week 6 visit from Memphis and finally goes traveling when they fly to Florida to clash with Miami on Saturday, Oct. 11.

Not only will SMU stay inside of state lines until October, it won’t play a non-Texas team until September is over.

SMU opens its season with a 100-mile road trip to Baylor, travels 40-miles to North Texas in Week 2, takes a break in Week 3, hosts Texas A&M in Week 4 and finishes the month with a home game against TCU on Sept. 27.

The Mustangs venture outside of Texas for the first time in 2014 on Saturday, Oct. 4 when they travel to play East Carolina in Greenville, NC.

Buffalo kicks off 2014 by welcoming FCS Duquesne, travels 340 miles to face Army at West Point in Week 2, hosts Baylor on Friday night in Week 3 and then finishes the month with home games against FCS Norfolk State and Miami (Ohio).

The Bulls finally leave New York for a Week 6 road trip to Ohio to square off with Bowling Green.

The second Ohio team that will stay local in September, the Rockets open 2014 with a home game against FCS New Hampshire, welcome Missouri to the Glass Bowl in Week 2, travel 200 miles to face Cincinnati at Paul Brown Stadium in Week 3 and finish out September with home dates against Ball State and Central Michigan.

Toledo will cross the Ohio state line on Saturday, Oct. 4 when it travels 150 miles to Kalamazoo to face Western Michigan.

It’s hard to believe that a team could schedule an entire month of football in New Mexico, but the Lobos do just that this season. New Mexico starts off by welcoming UTEP, hosts Arizona State in Week 2, takes a breather in Week 3, travels 225 miles to New Mexico State in Week 4 and wraps it with a Friday night home game with Fresno State.

The Lobos leave their home state in Week 6 when they travel to San Antonio to face UTSA.

ULM opens up the 2014 season with a Thursday night showdown in Monroe with Wake Forest, hosts Idaho in Week 2, travels 180 miles to Baton Rouge to play LSU in Week 3, takes Week 4 off and then starts its Sun Belt slate with a visit from Troy on Sept. 27.

The Warhawks’ first trip outside of Louisiana comes via a Week 6 visit to Jonesboro, Ark. to face Arkansas State.

Boston College opens the 2014 season with just over a half-hour drive to Foxborough to take on UMass. The Eagles then return home to host Pitt, USC, Maine, and Colorado State followed by an open date on Oct. 4.

BC’s first game outside the state of Massachusetts is Oct. 11 at NC State.

North Texas heads south to open the 2014 season in Austin against Texas. After that, the Mean Green return home to host SMU, Louisiana Tech, and Nicholls State.

After an open date on Sept. 27, North Texas makes their first trek outside the state of Texas when they take on Indiana in Bloomington on Oct. 4.

Does any website do a comprehensive analysis of miles traveled (or scheduled to be traveled excluding championship games) by each team?

[email protected] State is going to be a good one I think. Then a couple of weeks later at Miami(FL) will be interesting. Curious to see how there season turns out.