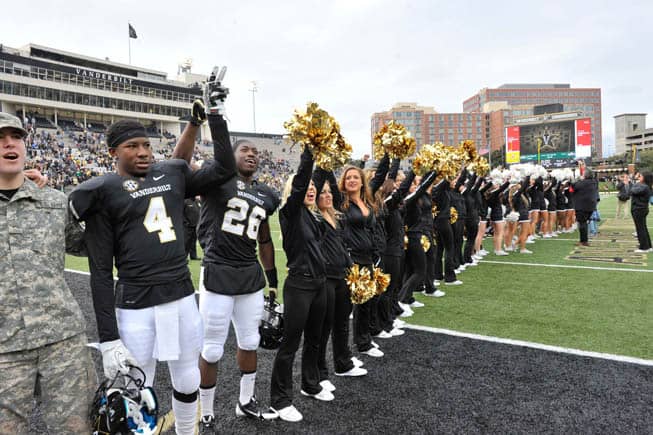 How big of a deal is home field advantage in college football?

According to an article by Patrick J. Kiger on Discovery.com, from 1869 to 2009 the winning percentage for college football teams playing at home was 63%. This means that the visiting team has only a 37% chance of winning a road game.

It’s a significant advantage, especially given a 12-game season where every win is crucial in making a championship run.

In 2014, FBS teams have between four and seven true road games, meaning some programs will have better odds at going undefeated than others.

Following is a look at the programs who will spend the least amount of time this season traveling.

Even though Florida State will face Oklahoma State, Notre Dame and Florida in non-conference play this season, it only has four true road games. This doesn’t include the home opener in Arlington, Texas against the Cowboys.

The only real road trips for the ‘Noles in 2014 are NC State, Syracuse, Louisville and Miami (Fla). The other seven games—or 58% of the schedule—will be played at home in Tallahassee.

Other than a Week 3 clash with UCLA in Arlington and the AT&T Red River Showdown vs. Oklahoma, the Longhorns have only four road trips in 2014: at Kansas, at Kansas State, at Texas Tech and at Oklahoma State.

Texas will play 50% of its regular-season games at home and 75% in the state of Texas.

Other than a Week 1 rematch with UCF in Ireland, Penn State will only venture out of Happy Valley four times in 2014.

The Nittany Lions’ only true road games are at Rutgers, at Michigan, at Indiana and at Illinois. This means that Northwestern, Ohio State, Maryland and Michigan State are all home games, as are three other non-conference tilts.

Another team that opens up at a neutral site, Wisconsin will grapple with LSU in Houston on Aug. 30.

Other than that, the Badgers will play away games only four times in 2014: at Northwestern, at Rutgers, at Purdue and at Iowa.

One of a whopping seven SEC programs to play only four true road games, Florida at least has its annual clash with Georgia in Jacksonville, FL to make it look legit.

The other bit that balances the scale for the Gators is that their road schedule is a gauntlet, even though it’s a short list: at Alabama, at Tennessee, at Vanderbilt and at Florida State.

The other half of the Florida-Georgia equation, the Bulldogs also have only four true road games in 2014.

The only difference is, their away slate is less scary than Florida’s: at South Carolina, at Missouri, at Arkansas (in Little Rock) and at Kentucky.

Not only does Vanderbilt have one of the weakest non-conference schedules among power-five teams (Temple, UMass, FCS Charleston Southern and Old Dominion), it only plays four road games. And it doesn’t have a neutrally-sited game.

Here’s the Commodores entire road schedule for 2014: at Kentucky, at Georgia, at Missouri and at Mississippi State.

Vandy is one of only two FBS teams to play 67% of its 2014 schedule at home, which includes the Sept. 6 game vs. Ole Miss at LP Field.

After traveling 200 miles to Atlanta to face West Virginia in its opener, Alabama will be in Tuscaloosa for all but four games in 2014.

The Tide’s road slate consists of Ole Miss, Arkansas, Tennessee and LSU. Alabama hasn’t dropped a game at home since losing to Texas A&M in 2012.

Even though the Razorbacks are 6-9 at home since 2012, they are just two seasons removed from going 7-0 in front of their home crowd.

In 2014, Arkansas has a Week 5 game with Texas A&M in Arlington, Texas, but other than that has only four true road games: at Auburn, at Texas Tech, at Mississippi State and at Missouri.

This means Alabama, LSU, Ole Miss and Georgia (in Little Rock) are all home games.

LSU has only lost one home game in three seasons, a four-point loss to Alabama in 2012.

The Tigers will open up the 2014 season in Houston where they will take on Wisconsin in front of what should be a predominately LSU-friendly crowd.

Other than that, road trips are at Auburn, at Florida, at Arkansas and at Texas A&M.

Ole Miss will kick off its 2014 campaign with Boise State in Atlanta and then travels only four times: at Vanderbilt, at Texas A&M, at LSU and at Arkansas.

Though Navy will play only four true road games in 2014, it has three neutral games on the slate. The Midshipmen will play Ohio State in Baltimore in Week 1, and though this is just a short drive from Annapolis, it’s tough to think this game will be attended by a massive, angry Navy crowd.

Next up is a Nov. 1 date with Notre Dame in Landover, MD, which again is geographically close but still won’t be much of a home game. Then there is the Army-Navy game in Baltimore.

The Irish neutral slate consists of a Sept. 13 clash with Purdue in Indianapolis, a Sept. 27 game with Syracuse in East Rutherford, NJ and a Nov. 1 date with Navy in Landover, MD.

True road games are at Florida State, at Arizona State and at USC, giving Notre Dame plenty of work to do while traveling.

UConn’s recent struggles mean that even the safe haven of Rentschler Field hasn’t offered much of an advantage.

In 2014, the Huskies will have four true road games: at USF, at Tulane, at East Carolina and at Memphis.

The schedule is balanced with a neutral-site contest with Army on Nov. 8 at Yankee Stadium in New York City.

Though FIU is the only FBS team other than Vandy to have eight home games in 2014, it hasn’t won at home since beating Akron on Sept. 8, 2012.

In 2014, the Golden Panthers will travel to UAB, UTSA, Old Dominion and North Texas. The other 67% of the schedule will be played at FIU Stadium in Miami.

Texas only has three games outside of Texas: Ok St, Kan, Kan St. So that’s 75% of games in Texas.

Although west Texas might as well be another state LOL.

Why does LP Field not count as a neutral site for Ole Miss @ Vandy? It’s not Vandy’s home stadium and Ole Miss fans will have the chance to buy a ton more tickets than they would have if the game had been played at Dudley Field. I bet the crowd is a minimum of 50/50 and possibly favors Ole Miss b/c of this.

Because it’s not a neutral-site game, it’s part of Vandy’s home season ticket package. Plus it’s less than 3 miles from their home stadium. There may be more Ole Miss fans there, but it’s still technically a home game for the Commodores.

whoops, meant to be a separate post, not a reply

Most SEC teams and their hometowns (restaurants, hotrls, etc.) make more money playing at home, so they have scheduled this way (7 home games for years). Other Power 5 conferences (with a few notable exceptions like the Big Ten’s Ohio State and Michigan and Big 12’s Texas and Oklahoma) have a more difficult time filling the home stadium more than 6 times.

Lately it has become more difficult for the SEC schools with many students failing to use alloted tickets. So schools like Georgia are cutting tickets reserved for students to sell to the public (on waiting lists).They are also adding WiFi and bigger video scoreboards with more replays to enhance the experience in the stadium for students and other fans.

Also, many Mid-Majors and FCS schools must travel to get the guaranteed payouts for playing. The SEC schools are happy to pay them..

Wisconsin, Iowa, Penn State and Michigan State are other Big Ten schools that have no problem filling their stadiums.

Talking about how many games UT plays within the state of Texas is kind of silly. Alabama, for example, plays exactly 1 game (Arkansas) that’s further away than Lubbock is from Austin and 2 games (Arkansas and LSU) that aren’t closer than a mile or two of the distance from Austin to either Jerryworld or the Cotton Bowl. There aren’t any actual long road trips on Bama’s slate that get anywhere near the distance that Texas will travel twice when it plays the Kansas teams or anything similar to the trips to UTEP, Wyoming, UCLA, Ole Miss, BYU, Notre Dame, Cal, Maryland, USC, Arkansas, or Ohio State… like you’d find on a normal Longhorn schedule in years where they didn’t put a neutral-site OOC game to fill a hole from Arkansas delaying the scheduled game. OF COURSE a lot of UT’s games are in Texas. 3 of their conference opponents are IN THE SAME STATE… and they play those other schools EVERY YEAR (something that can only be said for the Texas schools in the Big 12 and the California schools of the Pac 12). On top of that, one more game is played annually in state because it’s a neutral site game halfway between the two schools (and it’s still further than most SEC schools are from Alabama)! And that doesn’t even take into account the fact that it’s one of the few states where there are potentially quality OOC opponents for top tier competition… I mean a lot of pundits would love a renewed Texas vs A&M rivalry but that would mean that there’d be yet another game within the state.

I’m not meaning to go after Alabama specifically. I’m sure there are plenty of examples of similar situations if I look at other SEC and Big 10 schedules… maybe even ACC or Pac 12 (though those conferences are admittedly a bit more spread out… it would depend more on specific schedules). Texas is a big state and when you have 4 opponents from within the state on the slate, and 3 of them are further away than all but 1 or 2 teams on other schedules, yeah, there are going to be a lot of games in-state.

Texas should have a “home field” advantage for its home games and, yeah, probably the game in Arlington against UCLA, but Tech will pack their stadium, and having the OU game within the state doesn’t really translate to any particular advantage, given it’s halfway, OU gets as many tickets, and a ton of OU students live in Texas. The location of the game should be an advantage in about 7 (or, at most, 7.5) of the 12 games being played.

You might want to look up facts instead of pulling stuff out of your @ss. The SEC doesn’t schedule true away game b/c they play the least major conf opponents out of conference and that is b/c to schedule them you have to do home and homes. They hate home and homes b/c once they travel out of the south their record falls like a rock. Look up the history SEC teams going out west for example. Bama played home and home series 2000-2003 against and they lost all 4. They have subsequently scheduled 1 true road game OOC in the last 10 years.

To be fair, most teams traveling over 1,000 miles from home end up losing.