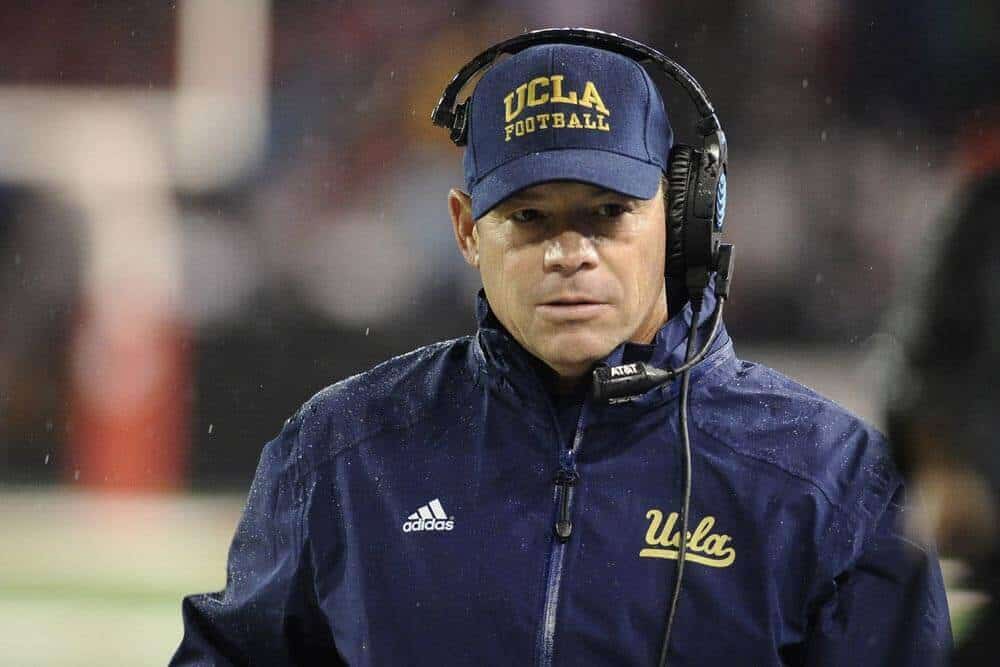 Though we don’t know what college football will look like in 25 years, we do know that some of the young athletes we’re watching today will be stalking the sidelines in the future.

Gridiron history is filled with stories of players – five-star recruits and walk-ons alike – stepping across the sideline and making the metamorphosis from a short-term participant to a career of coaching.

Following are 12 former college football players who not only went on to join the coaching ranks, they’ve ascended to the highest post – an FBS head coaching role. This season they’ll square off with the program that got them into the college game in the first place.

Pitt’s third-year head coach, Pat Narduzzi, played linebacker his freshman season at Youngstown State in 1985. His coach that season was his father, Bill Narduzzi, who led YSU to the DII national championship game in 1979. Pat transferred to Rhode Island as a sophomore and finished his collegiate career there.

Narduzzi has faced Youngstown State once previously, a 45-37 win in 2015. It was also his first-ever game as a head coach.

Gary Patterson played strong safety and outside linebacker for Kansas State from 1980-81, also starting his coaching career there as a graduate assistant in 1982.

Patterson is 2-2 vs. the Wildcats as a head coach (all at TCU), dropping the first two meetings and picking up two consecutive wins since. He’s also one of only three current FBS coaches who plays his alma mater on an annual basis.

Jeff Brohm’s first-ever game as the head coach at Purdue will be against his alma mater. Brohm played quarterback at Louisville from 1989-93, leading the Cardinals to a 9-4 record and a No. 24 rank in the final AP as a senior.

Charlotte has been fielding a football team since 2013, first as an FCS school and then as a member of the FBS, which it moved into via Conference USA in 2015. In all that time, they’ve had one coach – Brad Lambert – who played defensive back at Kansas State from 1983-86.

This year’s game is the first-ever in history between Charlotte and K-State, so it’s also Lambert’s first-ever meeting as a head coach vs. his alma mater. He did square off with the Wildcats early in his career, as a graduate assistant at Oklahoma in 1988 and 1989, his very first coaching stop. The Sooners won those two games by a combined score of 112-40, giving him technically a 2-0 record vs. K-State as a coach.

Rocky Long played quarterback at New Mexico from 1969-71, earning WAC offensive player of the year honors as a senior. He also served as the Lobos’ head coach from 1998-2008 – prior to taking over as the defensive coordinator at San Diego State in 2009.

After making stops as an assistant in the Big Ten, SEC, and MWC, Justin Wilcox’s first-ever job as a head coach lands him back where he started his collegiate career in the Pac-12. Wilcox played defensive back at Oregon from 1996-99.

Jim Mora played defensive back/linebacker at Washington from 1980-83. Though he began his coaching career at his alma mater as a graduate assistant in 1984, he spent from 1985-2009 at the NFL level before taking over at UCLA in 2012.

For Kyle Whittingham, Utah and BYU’s “Holy War” also represents the intersection of his career as a player and a coach. Whittingham played linebacker at BYU from 1979-81, earning WAC defensive player of the year honors as a senior.

He’s been on the staff at Utah since 1994, spending 10 years as a defensive assistant before taking over the reins in 2005. He’s 7-3 as a head coach vs. his alma mater, winning the last six consecutive meetings.

Gus Malzahn played wide receiver at Arkansas from 1984-85 before transferring to Division II Henderson State (in Arkadelphia, Ark.) to finish out the balance of his playing career.

He spent the first 15 years of his coaching career at the high school level in Arkansas before taking an offensive assistant role for the Razorbacks in 2006. His first head coaching job was at Arkansas State in 2012.

Malzahn is 3-1 vs. Arkansas since taking over at Auburn in 2013. His only other coaching experience against the Razorbacks came in 2008, when he was an offensive assistant at Tulsa – a narrow 30-23 loss for the Golden Hurricane.

Will Muschamp was a walk-on at Georgia in 1991. Earning a place on the team as a safety, he recorded two interceptions as a senior in 1994.

Georgia State—which didn’t field a football team until 2010—is Shawn Elliott’s first-ever post as a head coach. Elliott played defensive end for Appalachian State from 1992-95, where he also served as an assistant coach from 1997-2009.

His only experience away from App State was a long run as an offensive assistant at South Carolina (2010-16). He’s never faced his alma mater as a coach.

Texas State is Everett Withers’ third stint as a collegiate head coach, also serving at North Carolina (2011) and FCS James Madison (2014-15). A native of North Carolina, he played at Appalachian State from 1981-85 as a defensive back and linebacker.

Despite also making seven stops as an assistant at the college level, the Bobcats’ 2016 game vs. the Mountaineers (a 35-10 loss) was Withers’ first-ever clash as a coach with his alma mater.