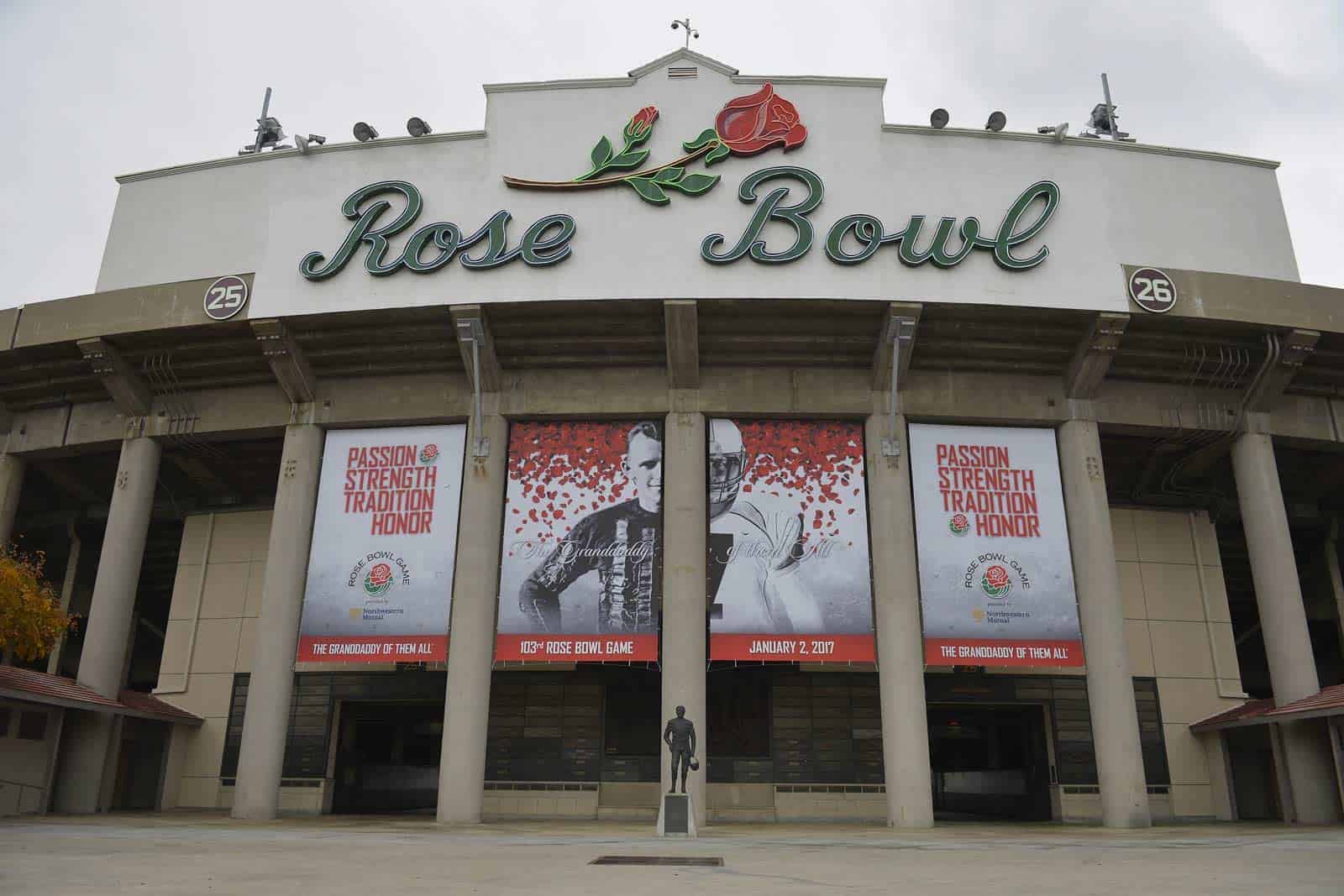 Your first New Year’s resolution is easy – watch football all day on Jan. 1.

The action starts early with three games kicking off within an hour of one another – the Outback Bowl at noon EST on ESPN2, the Peach Bowl at 12:30pm EST on ESPN and the Citrus Bowl at 1pm EST on ABC.

Then it’s time for a quick break – go to the bathroom, restock your beverages or fry up your wings – because things get for real at 5pm EST on ESPN when the playoff bracket finally goes live.

When the dust settles late Monday night, we’ll know which two teams will compete for the national championship on Jan. 8.

What Michigan has going for it is a stellar defense, ranked No. 13 nationally in scoring, No. 21 against the run and No. 1 vs. the pass. What South Carolina doesn’t have going for it is a great offense – No. 98 in scoring, No. 108 in rushing and No. 79 in passing. This one will likely come down to how well the Gamecocks’ D – ranked No. 43 vs. the run – can contain the Wolverine’s one offensive facet – its No. 43 ranked ground game.

Michigan: junior running back Karan Higdon (#22) (tied for No. 3 in the Big Ten in rushing TDs), senior defensive lineman Chase Winovich (#15) (tied for the ninth-most tackles for a loss in the FBS).

South Carolina: senior defensive lineman Dante Sawyer (#95) (tied for the most forced fumbles in the FBS).

UCF looks like a Big 12 team on paper – No. 7 in the FBS in pass offense vs. No. 111 in pass defense. The intriguing matchups in this one are the Knights’ potent aerial attack taking on Auburn’s No. 14 ranked secondary and the Tigers’ super-charged ground game (No. 22 in the FBS) vs. UCF’s No. 66 ranked rush D. Auburn should have a clear advantage in depth and athleticism, but the Knights have nothing to lose.

Auburn: junior running back Kerryon Johnson (#21) (tied for No. 7 in the FBS in rushing TDs and No. 14 in rushing yards per game).

The key matchup in this one is Notre Dame’s potent ground game – ranked No. 7 nationally – grappling with LSU’s No. 23 ranked rush defense. The Irish have only been held to fewer than 160 yards rushing three times this season – 55 vs. Georgia, 109 at Miami (Fla.) and 154 at Stanford – all three games resulted in losses. LSU, on the other hand, has only given up more than 200 ground yards twice – 285 to Mississippi State and 206 to Troy – also both defeats for the Tigers.

LSU: sophomore linebacker Devin White (#40) (tied for No. 9 in the FBS in total tackles), freshman cornerback Andraez Williams (#29) (tied for the third-most interceptions in the FBS).

The big-time question in this one is how Georgia’s stellar defense (No. 2 in the FBS vs. the pass and No. 12 vs. the run) will hold up against Oklahoma’s potent offense (No. 3 in passing yards per game and No. 27 in rushing). What may decide which team moves on to the title game is if the Sooners’ No. 40 ranked rushing D can contain a Bulldog ground game ranked No. 11 in rushing yards. Only one opponent in 2017 held Georgia to fewer than 185 yards rushing – Auburn – also its only loss. The Tigers limited the Dogs to 46 in their stunning 40-17 regular-season defeat.

Georgia: freshman quarterback Jake Fromm (#11) (No. 5 in the FBS in QB rating), junior inside linebacker Roquan Smith (#3) (No. 12 in the FBS in solo tackles), sophomore kicker Rodrigo Blankenship (#98) (tied for No. 6 in the FBS in field goal percentage).

Oklahoma: senior quarterback Baker Mayfield (#6) (No. 1 in the FBS in QB rating), senior defensive lineman Ogbonnia Okoronkwo (#31) (tied for No. 11 in the FBS in tackles for a loss).

Alabama is 36-25-3 in bowl play. It fell to 35-31 to (3) Clemson in last season’s CFP Championship game. Its most recent win also came last year, downing (4) Washington in the CFP semi-final Peach Bowl.

Including the two CFP championship games (the only postseason action), Alabama and Clemson have met 17 times previously. The series dates to 1900, the Tide lead 13-4.

Alabama and Clemson share similar statistical DNA – they both have wicked-good defenses (ranked No. 1 and No. 2 respectively in the FBS in scoring) and have had far more success running the ball than throwing it. Of the two, the Tide are more one dimensional on offense – ranked No. 10 in rushing nationally vs. a No. 86 rank in passing. Compare that to Clemson’s No. 33 rank in rushing and No. 52 rank in passing. This one may come down to the Tigers’ No. 13 ranked rushing D shutting down Alabama’s ground game and forcing them to win the game through the air. If it’s close, keep in mind that Clemson’s kicker – Alex Spence (#41) – has the lowest field goal percentage (58.3) in the FBS.

Alabama: junior running back Damien Harris (#34) (No. 7 in the FBS in yards per carry).