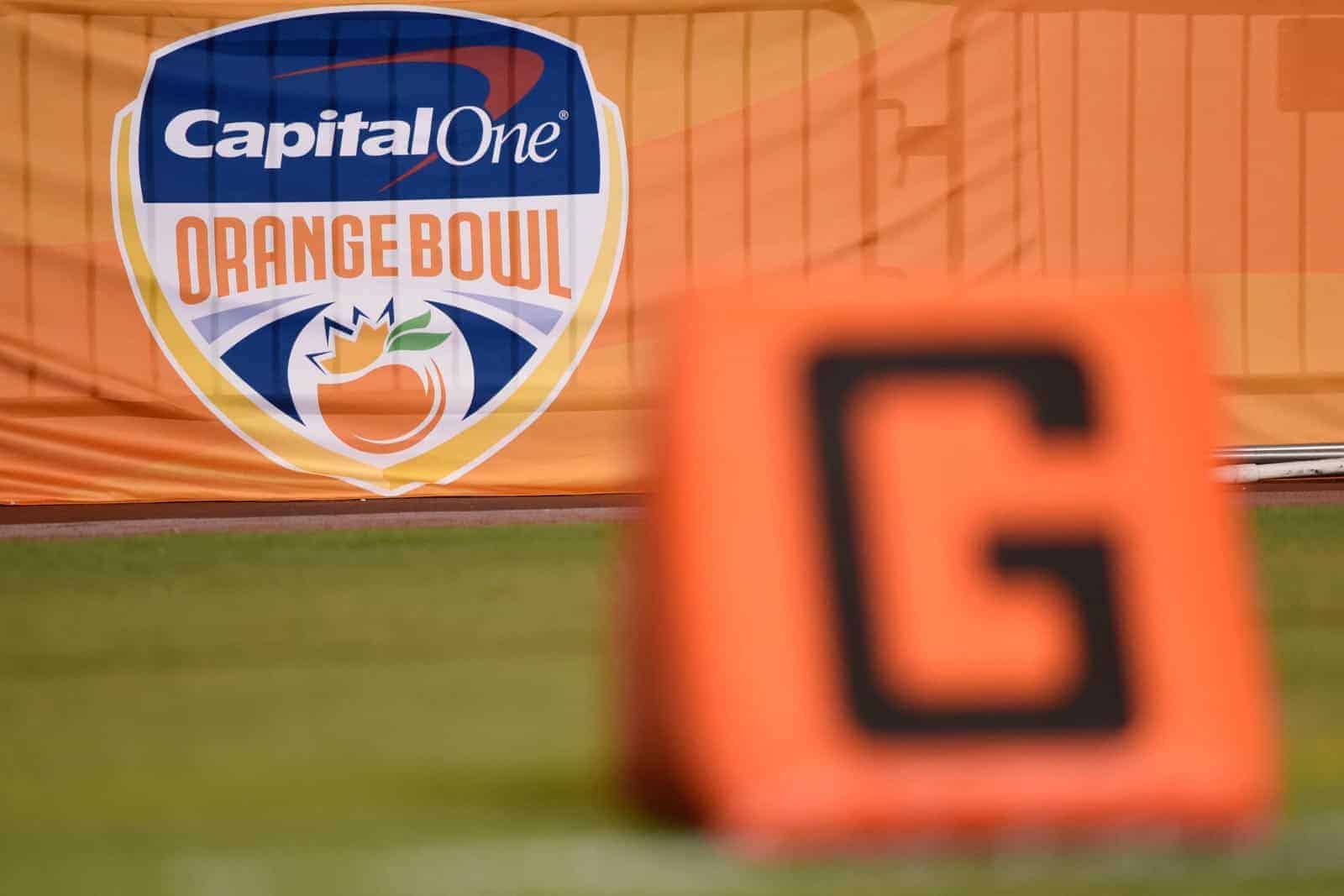 College football finishes 2017 with a bang – serving up nine games in a two-day bowl bonanza stretching from Friday to Saturday.

Both are all-day affairs with contests scheduled from noon until primetime. This is also the brief run where you’ll need to keep your remote handy as ESPN shares the airwaves with CBS on Friday and ABC on Saturday.

If you’re looking for the best potential viewing – check out the Cotton Bowl Classic on Friday night at 8:30pm EST on ESPN when Pac-12 champ (8) USC squares off with Big Ten champ (5) Ohio State. This is the battle of Power title holders who could of/should of/would of made the CFP bracket.

On Saturday, the goodness comes early when Louisville takes on (23) Mississippi State in the TaxSlayer at noon EST on ESPN. Though it doesn’t sound like a blockbuster, it’s one of the best statistical matchups of bowl season.

With New Year’s Eve (Sunday) reserved for the NFL, college football wraps up the 2017 calendar year in style on Saturday night with two ranked vs. ranked affairs – (11) Washington vs. (9) Penn State in the Fiesta Bowl on ESPN at 4pm EST followed by (6) Wisconsin at (10) Miami Fla. in the Orange Bowl on ESPN at 8pm EST.

Wake Forest is 7-4 in bowl play. It downed (23) Temple 34-26 in last season’s Military Bowl– also its first bowl appearance in four years. Its most recent loss came in the 2011 Music City Bowl, a 23-17 defeat to Mississippi State.

This is Wake Forest and Texas A&M’s first-ever football meeting. The Demon Deacons are 35-65-2 all-time against current SEC schools – the bulk of the action coming vs. South Carolina (20-34-2). The Aggies are 13-16 vs. the ACC.

Though Wake Forest has put together its best passing attack since 2009 this season (No. 4 in the ACC), it’s struggled to stop the pass (No. 104 nationally). This sets up well for an A&M offense that ranks No. 4 in the SEC in passing vs. a No. 9 rank in rushing. Look for the Aggies O to finish the season strong in this one.

Texas A&M: junior wide receiver Christian Kirk (#3) (tied for No. 6 in the SEC in receiving yards per game).

NC State is 16-13-1 in bowl play. It thumped Vanderbilt 41-17 in last season’s Independence Bowl. Its most recent loss came the year before, in the 2015 Belk Bowl, a 51-28 beatdown at the hands of Mississippi State.

NC State and Arizona State last met 43-years ago in 1974. It was one of only two times the two schools clashed – both regular-season games, both played in Tempe. The series is tied at 1-1.

Arizona State’s biggest weakness this season has been defending the pass – statistically the second-worst unit in the Pac-12. Nationally, only 12 teams have given up more yards through the air than the Sun Devils. This works out nicely for NC State, which has been more successful offensively throwing the ball than running it. The Wolfpack are No. 3 in the ACC in passing yards per game and No. 35 overall. They’ve only been held under 200 passing yards twice this season. Compare that to ASU’s average of 271.3 yards allowed.

Arizona State: junior linebacker Christian Sam (#2) (No. 3 in the FBS in solo tackles and 7 in total tackles).

Kentucky is 8-8 in bowl play. It lost 33-18 to Georgia Tech in last season’s Tax Slayer Bowl – also its third-consecutive bowl loss. The most recent win dates to the 2008 Liberty Bowl, a 25-19 victory over East Carolina.

Kentucky and Northwestern have only met once previously, 89-years ago in 1928. The purple version of the Wildcats won 7-0 in Evanston, Ill. That also means that the blue Wildcats have never-ever scored a point on their purple counterparts.

This one comes down to a decent rushing attack (Kentucky in No. 58 in the FBS) vs. a top-tier rushing D (Northwestern is No. 9 vs. the run nationally) and a middle-of-the-pack passing attack (Northwestern is No. 51) vs. a highly questionable secondary (Kentucky is No. 113 vs. the pass). Tune to see if the purple Wildcats can expose the blue Wildcats’ biggest weakness. Not to leave anyone out, Northwestern’s secondary ranks No. 100 nationally vs. the pass – it’s the most generous unit in the Big Ten.

Kentucky: sophomore running back Benny Snell, Jr. (#26) (No. 5 in the FBS in rushing TDs), senior quarterback Stephen Johnson (#15) (No. 6 in the SEC in passing yards per game).

Utah State and New Mexico State have met 37 times previously, but not since 2012. Utah State leads all-time 30-7 and has won the last three. The two played for the first-time ever in the 1960 Sun, also the only other postseason meeting. New Mexico State won 20-13.

It’s unfortunate that this game is sandwiched between more attractive options, because it features one of the best strength vs. strength matchups of the bowl season. Tune in to see New Mexico State’s No. 4 ranked passing offense – and that’s a national ranking – take on a Utah State D that ranks No. 17 (again, in the FBS) in pass defense. NMSU has hung up 300-plus yards through the air on nine of its opponents this season. Compare that to Utah State, which has held opposing offenses to fewer than 200 on seven occasions.

Utah State: senior cornerback Jalen Davis (#13) (tied for No. third-most interceptions in the FBS and No. 11 in passes broken-up), sophomore kicker Dominik Eberle (#62) (No. 5 in the FBS in field goal percentage).

New Mexico State: senior quarterback Tyler Rogers (#17) (No. 2 in the FBS in passing yards per game).

Ohio State is 23-25 in bowl play. It got shut out 31-0 by (3) Clemson in last year’s Fiesta Bowl – also a CFP semi-final game. It marked the Buckeyes’ second-consecutive visit to Fiesta Bowl, beating (8) Notre Dame in the 2015 edition.

USC and Ohio State have met 23 times previously but not since the 2009 regular season, the back end of a home-and-home series. This is the ninth postseason clash between the two, all eight previous meetings were in the Rose Bowl. The Trojans lead 13-9-1 and have won seven straight.

USC and Ohio State are mirror images of each other in two major statistical categories. First, both have been wildly successful at long plays from scrimmage – the Trojans are No. 4 in the FBS while the Buckeyes are No. 11. Next, both have had serious issues limiting penalties – USC is No. 122 among the 130 FBS programs while Ohio State is No. 120. Where the Buckeyes have a clear advantage, at least on paper, is defensively – ranked No. 7 nationally vs. the run and No. 18 vs. the pass. Compare that to USC’s No. 57 rank in rush D and No. 98 mark against the pass.

Louisville and Mississippi State haven’t met since 1976, the final year of two consecutive home-and-home series that kicked off in 1973. The Bulldogs won all four games.

This game features one of the best strength vs. strength matchups of this bowl season. Tune in to see Louisville’s potent offense (No. 13 nationally in scoring, No. 13 in rushing, No. 15 in passing) square off with Mississippi State’s stingy defense (No. 24 in scoring, No. 24 vs. the pass, No. 13 vs. the run). It’s the No. 2 offense in long plays from scrimmage (the Cardinals) vs. the No. 2 defense in defending long plays (the Bulldogs).

Mississippi State: junior defensive lineman Montez Sweat (#9) (tied for No. 10 in the FBS in sacks), freshman kicker Jace Christmann (#47) (No. 3 in the FBS in field goal percentage).

Iowa State is 3-9 in bowl play. It hasn’t made a postseason appearance since the 2012 Liberty Bowl, a 31-17 loss to Tulsa – also its fourth-consecutive bowl defeat. The most recent win dates to the 2004 Independence Bowl, a 17-13 win over Miami (Ohio).

Memphis is 4-5 in bowl play. It fell 51-31 to Western Kentucky in last season’s Boca Raton Bowl. Its most recent win came in the 2014 Miami Beach Bowl, a 55-48 double-overtime thriller over BYU.

This is Iowa State and Memphis’ first-ever football meeting. The Cyclones are 7-3 all-time vs. the current membership of the American while Memphis is 3-3 against the Big 12.

What’s interesting about this matchup is how it looks like a Big 12 conference game, at least on paper. Memphis’ statistical resume reads like a long-standing member of the pass-happy/no-defense league – ranked No. 8 in the FBS in pass offense and No. 123 in pass defense. What is different is a bit of balance on offense, illustrated by a No. 31 rank in rushing yards per game. Look for lots of points with the best defense hanging on to win. Also of note, both teams finished the regular season ranked in the top ten in the nation in turnover margin – Memphis at No. 4 and Iowa State at No. 9.

Washington is 17-18-1 in bowl play. It fell 24-7 to (1) Alabama in last season’s Peach Bowl – also a CFP semi-final game. Its most recent win came the season before, in 2015, when it beat Southern Miss 44-31 in the Heart of Dallas Bowl. Washington hasn’t beaten a Power-conference opponent in a bowl game since downing Nebraska 19-7 in the 2010 Holiday Bowl.

Washington and Penn State haven’t met since the 1983 Aloha Bowl, also the pair’s only-ever postseason clash. The only other action dates all the way back to 1921, a regular-season game in Seattle. The Nittany Lions lead 2-0.

Washington and Penn State have lots in common. Like Iowa State and Memphis, they’ve both been stellar in turnover margin – the Nittany Lions finished the regular season at No. 4 in the FBS while the Huskies came in at No. 9. They also share having more success on defense than offense and are both especially effective vs. the run. Of the two, it’s Washington that is statistically superior on defense – No. 1 vs. the run, No. 19 vs. the pass and No. 6 in scoring. Compare that to Penn State’s No. 17 in rush D, No. 43 vs. the pass and No. 7 in scoring. This one ought to be a dog fight.

Washington: junior tailback Myles Gaskin (#9) (tied for No. 3 in the FBS in rushing TDs), senior wide receiver Dante Pettis (#8) (No. 1 in the FBS in punt returns, expected to play despite an ankle injury).

Penn State: junior running back Saquon Barkley (#26) (tied for No. 12 in the FBS in rushing TDs), senior cornerback Christian Campbell (#1) (tied for the eighth-most passes broken-up in the FBS).

This is the fifth all-time meeting between Wisconsin and Miami. The two most recently clashed in the 2009 Champs Sports Bowl – a 20-14 win for the Badgers. The other three games were all in the regular season – a home-and-home in 1988-89 and in Miami in 1958. The series is tied at 2-2.

This one will likely come down to how well Miami’s No. 41 ranked rush D can contain Wisconsin’s No. 21 ranked rushing attack. On the flip side, tune in to see if the Hurricanes’ No. 58 ranked scoring offense can manage to find the end zone against a Badger D ranked No. 3 in scoring. Wisconsin is ranked No. 2 in long plays allowed – a number that got blown up in its loss to Ohio State in the Big Ten title game. The Buckeyes scored on pass plays of 57 and 84 yards in the first quarter – the difference makers in a 27-21 decision. Could this be the template for how Miami wins?

Wisconsin: freshman running back Jonathan Taylor (#23) (No. 3 in the FBS in rushing yards per game), junior cornerback Nick Nelson (#11) (No. 1 in the FBS in passes broken-up and tied for No. 2 in passes defended).