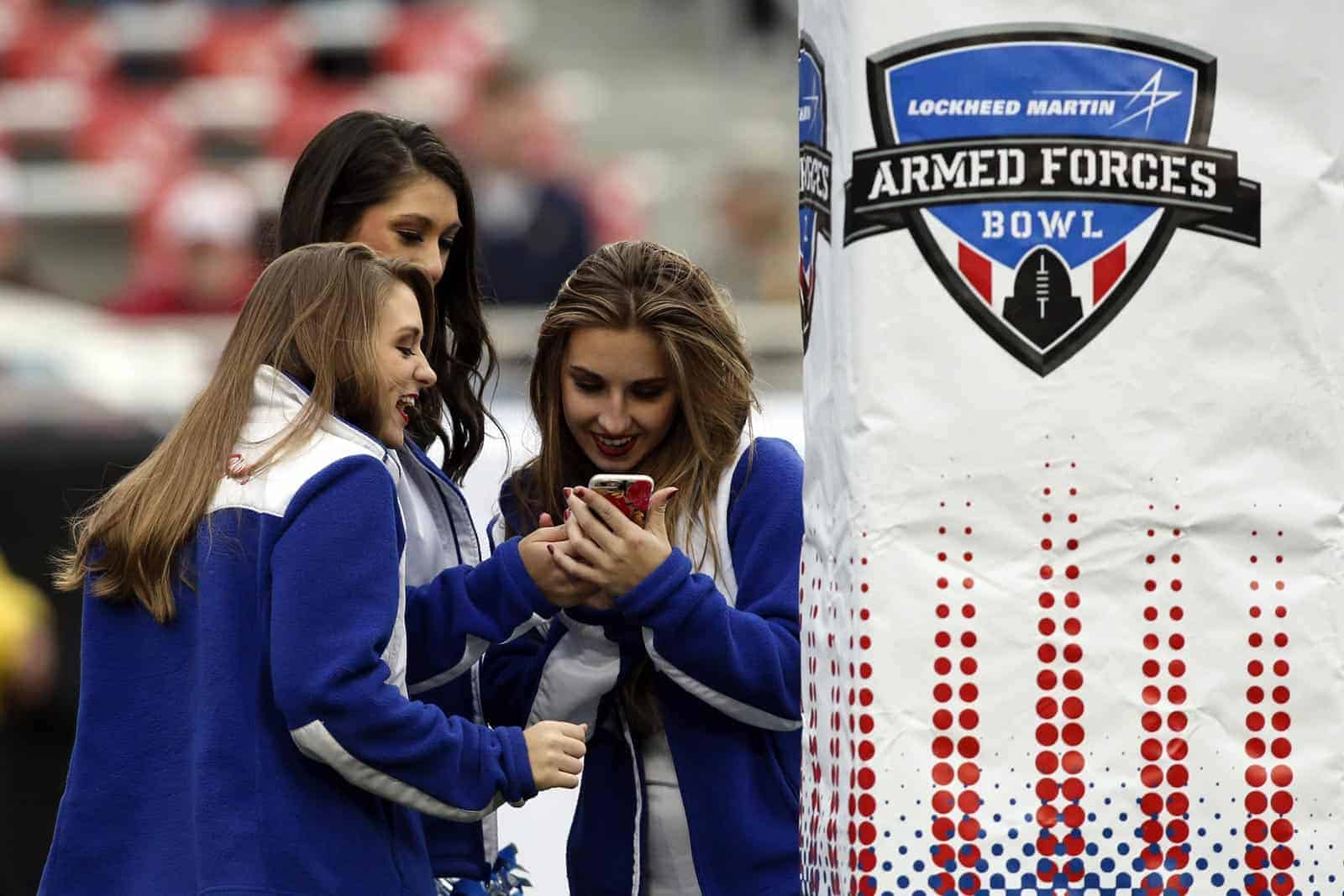 There are nine games on the bowl schedule this week, at least one contest per day stretching from Tuesday through Sunday. All five of the non-Power conferences are represented plus one independent and a member of the Big 12.

ESPN has the call on every single game offered, so there’s absolutely no need for a remote. The three weeknight games are all in the evening each scheduled between 7 and 8pm EST. On Friday, plan to tune early as the first game is on air at 12:30pm EST and the second at 4pm EST.

The best matchups are reserved for Saturday when Texas Tech takes on USF in the Birmingham Bowl at noon EST and Army squares off with San Diego State in the Armed Forces Bowl at 3:30pm EST. The day ends with a rare battle of champions – Sun Belt co-champ App State taking on MAC title holder Toledo in the Dollar General Bowl at 7pm EST.

That leaves one game on Sunday night, Christmas Eve, at 8:30pm EST – Fresno State vs. Houston in the Hawaii Bowl.

Akron is 1-1 in bowl play. Its most recent appearance was a 23-21 win over Utah State in the 2015 Idaho Potato – also the only-ever bowl win in program history.

This is the first ever meeting between Akron and FAU. The Zips are 17-32-2 vs. current members of C-USA while the Owls are 1-3 vs. the MAC.

This is a mismatch for Akron on two counts. First, the Zips rushing defense ranks No. 100 nationally, not a good omen vs. an Owl rushing attack ranked No. 6 in the FBS. Next up, FAU is No. 9 in long plays from scrimmage, another unfortunate dilemma for Akron’s defense – ranked No. 125 in long plays allowed.

Akron: Junior linebacker Ulysees Gilbert III (#5) (No. 7 in the FBS in total tackles).

The Bulldogs and Mustangs have met four times previously, but not since 2004. The entire series was played consecutively in the regular season from 2001-04. Louisiana Tech leads 3-1.

SMU combines a high-powered passing attack with a questionable defense. The Mustangs’ rank No. 16 through the air nationally vs. No. 113 against the run and No. 121 against the pass. Louisiana Tech is decent against the pass (No. 56 in the FBS) and slightly more successful running the ball (No. 55) than passing (No. 64) on offense. Look for the Bulldogs to either get torched or have an all-world day in yards, or both.

This is the first-ever football meeting between Temple and FIU. The Owls are 4-1 all-time against current C-USA members, while the Panthers are 3-7 vs. the American.

Temple averaged 251.6 passing yards per game this season, earning a No. 46 rank in the FBS. Compared to a No. 99 rank in rushing, it was the Owls bread and butter offensively, posting a 5-2 record in games where they eclipsed the average. Usher in FIU, ranked No. 95 nationally vs. the pass (and No. 13 of the 14 teams in C-USA) and the stars could align for Temple.

FIU: Junior defensive end Fermin Silva (#7) (No. 4 in C-USA in both sacks and tackles for a loss).

Ohio and UAB have never met in football. The Bobcats are 36-22-6 all-time against current members of C-USA, the bulk of that a 33-20-6 mark vs. Marshall. UAB is 0-1 against the MAC, its only-ever action a loss at Ball State earlier this season.

Both Ohio and UAB have been successful running the ball this season – the Bobcats are No. 17 in the FBS in rushing yards per game while the Blazers are No. 37. The mismatch comes in the ability to stop the run – Ohio’s rushing D is No. 10 nationally while UAB’s is No. 72.

Ohio: Sophomore quarterback Nathan Rourke (#12) (No. 2 in the FBS in rushing TDs, the most of any QB nationally), senior linebacker Quentin Poling (#32) (No. 3 in the MAC in tackles).

Central Michigan is 3-7 in bowl play. It’s lost four straight bowl appearances, including getting thumped 55-10 by Tulsa in last season’s Miami Beach Bowl. Its most recent win came in the 2009 GMAC Bowl, a 44-41 double-overtime thriller over Troy.

Wyoming is 6-8 in bowl play. It lost 24-21 to BYU in last season’s Poinsettia Bowl. Its most recent bowl win was also a double-overtime affair, a 35-28 decision over Fresno State in the 2009 New Mexico Bowl.

CMU and Wyoming met in a home-and-home series in 2000 and 2002. The two split the games, the home team winning on each occasion. This is their first-ever postseason meeting.

The compelling matchup in this one is CMU’s pass offense – ranked No. 4 in the MAC – taking on a Wyoming D ranked a lofty No. 5 in the FBS vs. the pass. The Cowboys’ defense has held opponents to, on average, 160.7 air yards per game this season. That puts them on par with Alabama (163.7) and Clemson (165.1). The downside is Wyoming’s sluggish offense – ranked No. 119 nationally in rushing and No. 102 in passing.

This is the first-ever meeting between Texas Tech and USF. The Red Raiders are 59-50-2 vs. the current membership of the American (the bulk coming against old Southwest Conference foes Houston and SMU). The Bulls are 5-8 vs. the Big 12 (3-4 vs. West Virginia).

This one pits a great passing team (Texas Tech, No. 11) against a decent pass defense (USF, No. 58) and a great rushing team (the Bulls, No. 9) vs. a decent rushing D (the Red Raiders, No. 53). It will come down to which defense can do a better job containing the opposing offenses’ super power. If you’re looking for a clean, mistake-free contest this isn’t it. Texas Tech ranks No. 125 nationally in penalties while USF is No. 129.

Texas Tech: Junior wide receiver Keke Coutee (#2) (No. 7 in the FBS in receiving yards per game).

San Diego State and Army have met twice previously, a home-and-home series in 2011-12. The Aztecs won both games.

This is a fascinating battle between two of the best rushing offenses in the country – SDSU is No. 12 in the FBS and Army is No. 1. The gap comes on defense – the Aztecs are No. 8 nationally vs. the run while the Black Knights’ are No. 54. SDSU also has the distinction of being the best in the nation in defending long plays. On the flip side, Army held its best rushing opponent – Air Force (No. 4 in the FBS) – to a paltry 95 yards in November. The Falcons averaged 307.42 rushing yards per game this season.

San Diego State: Senior running back Rashaad Penny (#20) (No. 1 in the FBS in rushing yards per game and total yards – the only back in the FBS with 2000-plus rushing yards).

Army: Senior quarterback Ahmad Bradshaw (#17) (No. 10 in the FBS in rushing yards per game and No. 1 among quarterbacks).

This is a rematch of last season’s Camellia Bowl, also the only-ever meeting between Appalachian State and Toledo. The Mountaineers are 3-2 all-time vs. current MAC members while Rockets are 6-1 vs. the Sun Belt.

Toledo’s offense has been effective both running and through the air this season – ranked No. 26 nationally in rushing yards per game and No. 20 in passing. It’s a balanced attack that’s earned the Rockets a No. 11 ranking in scoring. It will be a serious test for App State’s defense – a unit that ranks No. 33 nationally in scoring allowing a paltry 21.9 points per game. On the other side of the ball, Toledo’s No. 68 ranked rushing D will have to contain the Mountaineer’s No. 28 ranked ground attack.

Appalachian State: Senior quarterback Taylor Lamb (#11) (No. 12 in the FBS in rushing yards per carry), sophomore defensive back Clifton Duck (#4) (tied for the third-most interceptions in the FBS).

Toledo: Senior quarterback Logan Woodside (#11) (No. 5 in the FBS in QB rating), sophomore wide receiver Diontae Johnson (#3) (tied for No. 4 in the FBS in receiving TDs), junior defensive end Olasunkanmi Adeniyi (#9) (tied for the sixth most tackles for a loss in the FBS).

This is the first-ever meeting between Fresno State and Houston. The Bulldogs are 10-6 all-time against current members of the AAC while the Cougars are 19-6 vs. the Mountain West.

Fresno State has quietly earned a No. 9 national rank in scoring defense this season, holding opponents to a mere 17.2 points per game. This doesn’t bode well for a Houston offense that’s struggled to find a consistent rhythm, ranked No. 67 in the FBS in scoring and averaging 28.4 points per game. What may make the difference is on the other side of the ball, where the Bulldogs’ passing attack, ranked No. 5 in the MWC, could have an all-world day vs. Houston’s pass D, ranked No. 118 nationally.

Houston: Senior wide receiver Linell Bonner (#15) (No. 24 in the FBS in receiving yards per game), sophomore defensive tackle Ed Oliver (#10) (tied for No. 30 in the FBS in tackles for a loss).