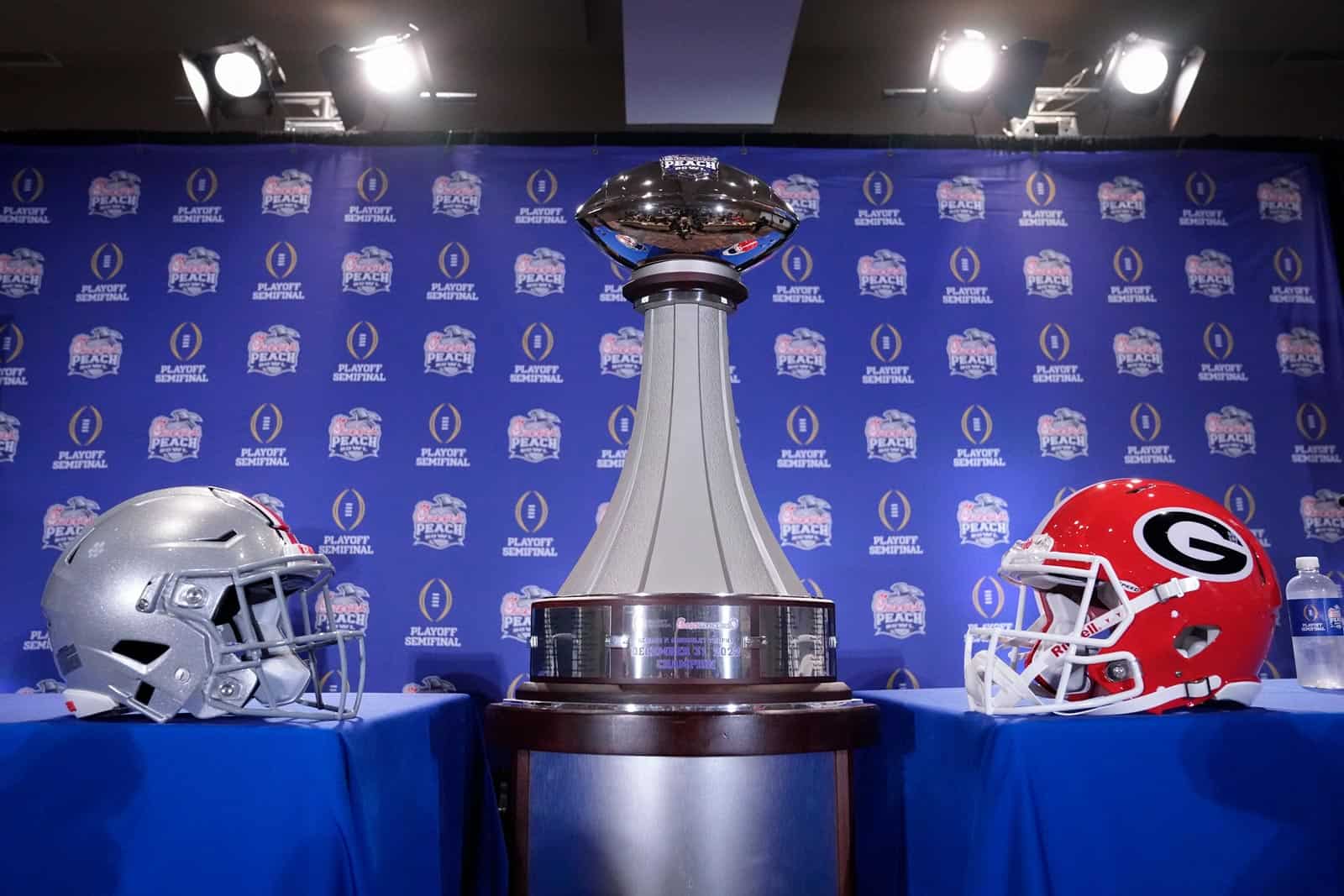 The sixth installment of the 2022 college football bowl schedule breakdown is what we’ve been waiting for. After 34 games in 15 days – a generous offering that while entertaining and intriguing lacked meaning beyond bragging rights – it’s time for the delicious essence of postseason substance.

Here’s your mental checklist for sending out 2022 in style:

(1) There are two early contests before the mini-bracket kicks off, both air at Noon ET: the Sugar Bowl – a delicious David vs. Goliath contest – is on ESPN and the Music City Bowl is on ABC.

Alabama is 45-27-3 in bowl play, most recently falling to then (3) Georgia in last season’s CFP Championship game. The last win also came in 2021, a 27-6 victory over then (4) Cincinnati in the CFP Semifinal/Cotton Bowl.

This is Alabama and Kansas State’s first-ever football meeting.

One of the interesting facets of Alabama’s statistical resume in 2022 is its performance against the run. Where the Tide held its first six opponents to, on average, 85 rushing yards per game, it coughed up a whopping 188 to its final five FBS foes. The 318 ground yards it gave up to Auburn in the finale was the first time a Saban defense has given up 300-plus rushing yards since Nov. 19, 2011, when then FCS Georgia Southern visited Tuscaloosa and hung up 302 on the Tide. It makes Kansas State – the No. 17 ranked rushing attack in our America – an intriguing dance partner. It’s the same offense fresh from racking up 205 rushing yards on a (3) TCU defense allowing 150 in the Big 12 title game. Also of note, where the Wildcats are ranked No. 4 in the nation in turnover margin (plus 14) the Tide are No. 96 (minus 4).

Beyond the numbers, what’s so attractive about this matchup is that on one side of the ball you’ve got a team that’s made up of two- and three-star recruits and transfers from junior colleges while on the other it’s the five -star of all five-star-studded talent shows. For K-State, the Sugar Bowl is a banner year, a destination that it had to scrap for, an achievement which will be lauded and remembered. While for Alabama it’s a legitimate letdown, one of the few seasons it failed to make the CFP bracket.

The Sugar Bowl may not mean anything, but for the up and comers, don’t have as muchers, and dreamers of the world, it’s every single thing.

Iowa and Kentucky’s only-ever football meeting occurred earlier this year, on Jan. 1, in the Citrus Bowl, a 20-17 win for the Wildcats.

What you’ve got here is two of the best defenses in the country playing two of the most ineffective offenses. Where Iowa is ranked a lofty No. 6 in the FBS in scoring defense, it’s a dismal No. 123 in the nation in scoring offense. And, where Kentucky is No. 12 nationally in points allowed, it’s No. 105 in points scored. The deciding factor may be the Wildcats’ passing attack, while not all-world by any means – No. 88 in the FBS – Kentucky hasn’t lost a game when it’s thrown for more than 220 passing yards. How does Iowa matchup? The Hawkeyes are No. 9 nationally vs. the pass, making them, far and away, the best defense the Kentuckians have faced this year. But…and I feel like you knew that was coming – did you know that the Hawkeyes have only played three pass offenses ranked in the top half of the nation this season? (4) Ohio State (No. 14 in passing yards per game), Purdue (No. 17), and Iowa State (No. 37). How did it go? Well, they went 1-2 vs. the passers. The truth is the highly-decorated defenses of the Big Ten West – four of which are ranked in the top 15 nationally in total D – are, at least in part, so highly-rated because the division’s opposing offenses – only two of which are ranked in the top half of the nation in total offense – have ridden the struggle bus all season. Throw in that neither Iowa or Kentucky has their starting QB in the Music City Bowl, and that two of the three replacements have never taken a snap at the college level, and this might be the lowest scoring bowl game of the season.

Iowa will be without both its starting QB – senior Spencer Petras (#7), who suffered an arm injury in the regular season finale vs. Nebraska – and his backup Alex Padilla (#8) who has entered the transfer portal and has yet to emerge on the other side.

Kentucky will be without its starting QB – senior Will Levis (#7) – who has opted out of the Music City Bowl to declare for the NFL Draft.

Kentucky: backup QB redshirt freshman Kaiya Sheron (#12) (17-of-29 for 187 yards, two TDs and one INT) and third-string QB true freshman Destin Wade (#15) (has yet to participate as a collegian) – both are expected to play in the Music City Bowl

Michigan is 21-18 in bowl action, last falling to then (3) Georgia in the 2021 CFP Semifinal/Orange Bowl, also its fifth-straight bowl loss. The Wolverines haven’t won a bowl game since destroying then (19) Florida 41-7 in the 2015/16 Citrus Bowl.

This is TCU and Michigan’s first-ever meeting on the gridiron.

The common thread that links TCU’s only loss (the 31-28 defeat to K-State in the Big 12 Championship) and its nearest miss (the 29-28 win at Baylor) is that they’re the only outings in 2022 where the Horned Frogs allowed an opponent 200-plus rushing yards. The Wildcats rushed for 205 in the title game and the Bears gained a season-high 232. It makes Michigan – an offense ranked No. 6 nationally in rushing vs. a No. 93 mark in passing – a dangerous dance partner. Though TCU has faced six ground games ranked in the top 40 nationally, the most-elite unit – Oklahoma at No. 13 – is ranked seven slots below the Wolverines. The Frogs limited the Sooners – a unit averaging 218 yards – to 179 in the blowout win. It’s the same TCU defense that completely squeezed (20) Texas – an offense averaging 200 ground yards per game (No. 26) – allowing just 28 total rushing yards. If it can manage a repeat performance vs. Michigan – the kids from Fort Worth will have a chance to make history.

Michigan star RB Blake Corum (#2) (tied for No. 4 in the FBS in rushing yards per game) is out of the Fiesta Bowl with a knee injury.

Other than coughing up 45 points and 530 total yards – both season highs – what stood out in Ohio State’s loss to (2) Michigan was its inability to score a touchdown in the red zone. Where the Buckeyes had scored six points on 79.7 percent of their visits inside the 20 in their first 11 outings, that number plummeted to 25 percent in the game vs. the Wolverines. It’s no coincidence that UM is also the best defense that they’ve faced this year in red zone play – ranked No. 3 in the FBS in preventing touchdowns, allowing just 37.9 percent. It also makes sense that the Bucks’ nearest miss this season – the 11-point win over (11) Penn State – was to a Nittany Lion defense ranked No. 9 in the nation in red zone TDs. Cue up Georgia – ranked No. 1 in stopping opposing teams from finding the end zone from within its own 20 – and the Ohioans might be in for a long evening. The Bulldogs have sizzled in the red zone, giving up a touchdown only 32 percent of the time, the best mark by any club since last year, when UGA – aka the national champs – allowed just 28.1 percent.

Georgia: senior QB Stetson Bennett (#13) (No. 13 in the FBS in completion percentage)