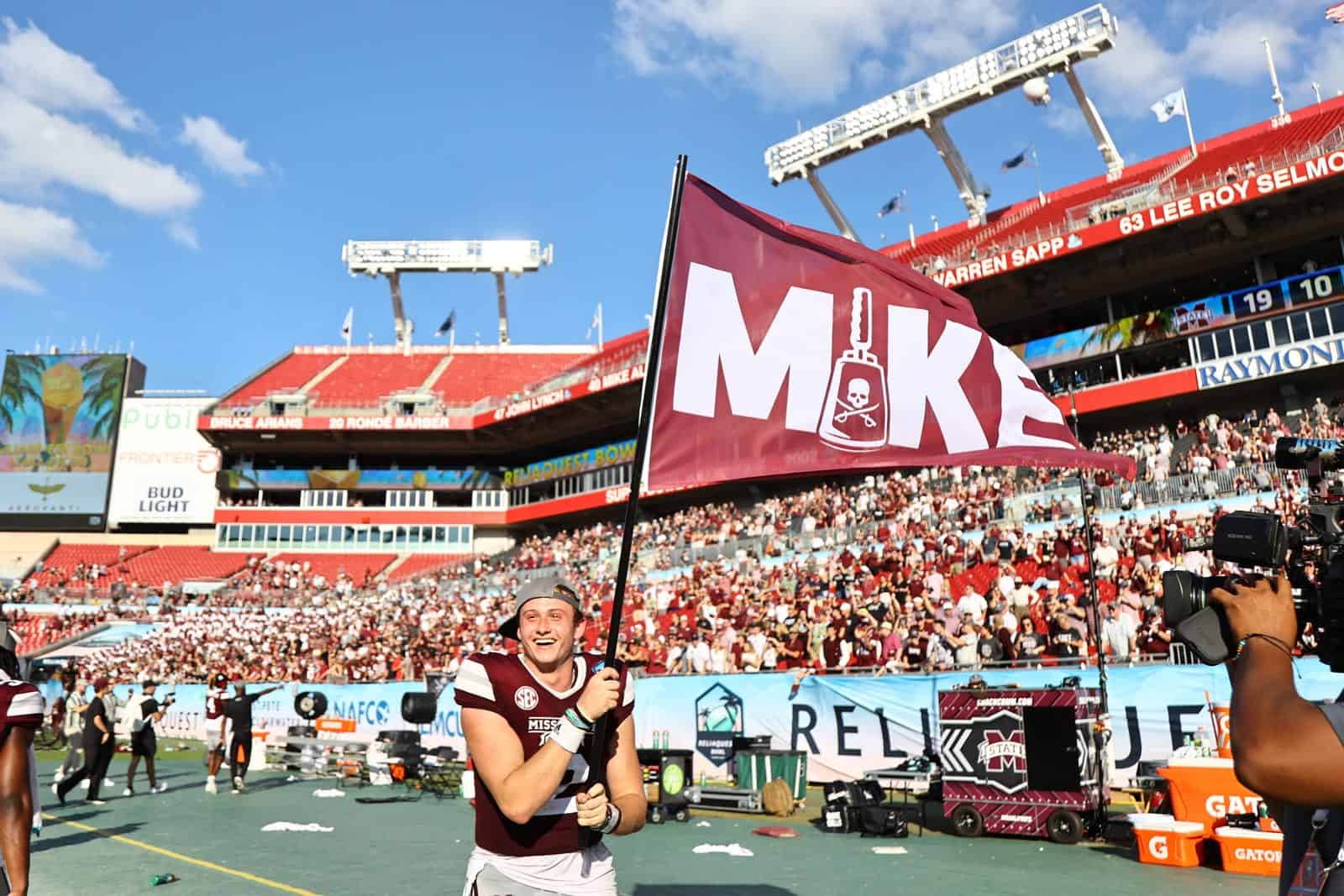 What remains, other than the CFP title game on Jan. 9, are the final four bowl games, all slated for Monday. Not only is it the last installment of our bowl breakdown extravaganza – it’s the first four college football games of the 2023 calendar year. It’s also a quality situation with all but one of the contests on offer touting a spread of a fewer than three points – a grouping that includes the tussle between (16) Tulane and (10) USC. You heard that right friends, the folks in Vegas have the Trojans as only 2.5-point favorites vs. the Waves.

The message is clear: If you feel over-stuffed with holiday college football, this is not the time to start your “Dry January” diet of basketball and hockey. No indeed, pull up your socks, turn on your TV sets, and get to watching! Because, guys, seriously…in about a week the best team sport in the world will be on a seven-month hiatus.

(1) Monday’s lineup starts at Noon ET with an emotionally charged ReliaQuest Bowl, where Mike Leach will not only be in everyone’s minds but also in so many hearts. It’s also the only bowl game to air on ESPN2, so prepare your dial accordingly.

(2) Games two and three both kick an hour after game one gets underway, at 1pm ET – the Cotton Bowl is on ESPN while the Citrus Bowl is on ABC.

(3) That leaves the Granddaddy of them All, the Rose Bowl, which is slated for 5pm ET on ESPN.

A sincere “thank you” to all of those who stopped by and visited our bowl party when they could – it’s been, as Eleanor Roosevelt was fond of saying, a real juicy delight.

Mississippi State and Illinois have met twice previously, both during the regular season in Champaign – most recently in 1980 (a win for the Bulldogs) and for the first time 100 years ago, in 1923 (a win for the Illini).

This is a classic matchup between old-school and new-school football. Where Mississippi State’s air-raid offense is ranked No. 11 nationally in passing offense, Illinois’ stifling defense is ranked No. 6 in the FBS vs. the pass. Which unit has earned its high marks vs. the stiffest opposition? That would be the Bulldogs – seven of the 11 FBS opponents they’ve played are ranked in the top half of the nation in passing defense with three in the top 20. MSU hung up 231 air yards on a (5) Alabama D giving up, on average, 186 yards per game (No. 17 in the FBS), 203 on a Kentucky unit allowing 173 (No. 7) and a whopping 329 on a Texas A&M defense giving up 156 (No. 1 in the entire nation). As for the Illini, they’ve only faced two offenses ranked better than No. 80 in passing yards per game – limiting a Michigan State unit averaging 240 air yards (No. 56 in the nation) to 182 and holding a Purdue attack averaging 287 (No. 17) to 237. Also of note, despite not necessarily facing the Murder’s Row of passing attacks, Illinois’ defense leads the entire nation in interceptions with 22. That fact needs further explanation because, as you’ll see below, the Illini have bid an early adieu to two of their top four interceptors.

Illinois will be without its leading rusher, junior RB Chase Brown (#2) (No. 3 in the FBS in rushing yards per game), senior DB Sydney Brown (#30) (tied for the second most interceptions in the FBS) and junior DB Devon Witherspoon (#31) (three interceptions on the season) – all three have opted out of the ReliaQuest Bowl to declare for the NFL Draft.

Due to the tragic passing of Mike Leach, Mississippi State will be led from the sidelines by Zach Arnett, who was named the new head coach on Dec. 15. Arnett played linebacker at New Mexico (2005-08) and then spent six seasons as a defensive assistant/DC at San Diego State before taking the DC job at Mississippi State in 2020.

Mississippi State: junior QB Will Rogers (#2) (No. 8 in the FBS in passing yards per game), junior CB Emmanuel Forbes (#13) (tied for No. 2 in the FBS in interceptions) – despite declaring for the NFL Draft, Forbes will play in the ReliaQuest Bowl

Tulane is 6-8 in bowl action, most recently falling 38-27 to Nevada in last year’s Famous Idaho Potato Bowl. The last win came in the 2019 Armed Forces Bowl, a 30-13 victory vs. Southern Miss. It hasn’t beaten a current Power 5 member in a bowl game since the 1970 Liberty Bowl, a 17-3 win over Colorado.

A rematch of the 1931/32 Rose Bowl – a win for USC – the only other football action between these two programs was a 1942/46 home-and-home. Tulane’s only win in series history came in 1942 in Los Angeles when it was still a member of the SEC.

The strength vs. strength matchup in this one (aka the most delicious Power 5 vs. Group of 5 pairing of the 2022-23 bowl season) pits USC’s passing attack – ranked No. 5 in the FBS – against a Tulane defense ranked No. 18 nationally vs. the pass.

What’s interesting about the Trojans’ statistical resume is that it’s only faced six defenses which are currently ranked in the top half of the nation vs. the pass. The most elite units they’ve met are (1). Fresno State which has given up, on average 189 air yards per game (No. 20 in the FBS) – USC hung up 284 yards on the Bulldog D in a 45-17 rout and (2). (21) Notre Dame, which has allowed 191 yards per game (No. 20) – the Trojans threw for 232 in a narrow 48-45 win. As for the Waves, they’ve been more battle-tested, at least on paper, squaring off with five opponents with passing attacks ranked in the top 25 in yards per game this season, winning all five of those games. Included in the highlights were limiting a Houston offense averaging 321 air yards (No. 6 in the FBS) to 208, holding on vs. an SMU attack averaging 317 (No. 9), giving up 329 and squelching Tulsa – averaging 273 (No. 24) – to a mere 146.

The real window of opportunity for Tulane comes on the other side of the ball, when it fires up its offense – ranked No. 21 in the nation in scoring – against a USC defense that’s struggled to a No. 81 rank in points allowed. Especially egregious is the Trojans’ pass defense, ranked No. 112 nationally and fresh off giving up 300-plus passing yards in each of its last three outings.

This is LSU and Purdue’s first-ever football meeting.

With Jeff Brohm off to take over the head job at his alma mater Louisville, Purdue will be led in the Citrus Bowl by Jeff’s brother Brian Brohm who’s been the Boilermakers’ OC since 2017. Also on staff as an interim assistant for the Citrus Bowl is Drew Brees, who played QB at Purdue from 1997-2000. Moving forward, the Boilermakers have hired Ryan Walters who played safety at Colorado from 2004-08 and most recently served as the DC at Illinois since 2021.

LSU will be without its No. 2 receiver, junior WR Kayshon Boutte (#7) who reversed course declaring for the NFL Draft and opting out of the Citrus Bowl.

LSU: junior QB Jayden Daniels (#5) (tied for the third-most rushing TDs by a QB in the FBS) – despite suffering an ankle injury in the SEC title game, Daniels has indicated that he’s “ready to go” for the Citrus Bowl, freshman LB Harold Perkins Jr. (#40) (tied for No. 3 in the SEC in sacks, No. 5 in tackles for a loss)

This is Penn State and Utah’s first-ever football meeting.

On paper this is one of the best matchups of the 2022/23 bowl season. In one corner it’s Penn State’s No. 18 ranked scoring offense while in the other it’s Utah’s D, ranked No. 24 in the FBS in points allowed. Flip the script and it gets even better – a Ute offense ranked No. 8 in scoring taking on a Nittany Lion D ranked No. 9 in points allowed.

What stands out in Penn State’s two losses in 2022 was a struggle to establish the running game, averaging 196 rushing yards in its ten wins only to gain a mere 111 in both its loss at (2) Michigan and vs. (4) Ohio State. It’s no coincidence that the Wolverines (No. 3 in the FBS vs. the run) and the Buckeyes (No. 23) are two of the three best defenses the Nittany Lions faced this season. The other? That was Minnesota, giving up, on average, 105 rushing yards per game (No. 15). PSU managed 175 ground yards vs. the Gophers in a 45-17 blowout victory. Utah is ranked No. 16 in the nation vs. the run, making it the third-best unit the Pennsylvanians have faced.

The common thread in Utah’s three defeats in 2022 was an inability to squelch opponents’ third-down tries. Where it allowed a successful conversion only 29.6 percent of the time over the course of the season (the ninth best mark in the FBS) it allowed 58.3 percent in the opening loss to Florida, 55.6 percent in the defeat at (18) UCLA and 46.7 percent in the loss at (15) Oregon. Compare that with the Utes’ performance vs. (10) USC in the Pac-12 title game when they allowed a successful conversion just 8.3 percent of the time! Penn State’s offense has converted 36.5 percent of its third-down tries this season, earning it a No. 93 rank nationally and a No. 11 rank in the Big Ten.

Utah will be without sophomore CB Clark Phillips III (#1) (tied for No. 9 in the FBS in interceptions) and TE Dalton Kincaid (#86) (the No. 2 TE in the FBS in receiving yards per game and receiving TDs) – both have opted out of the Rose Bowl to declare for the NFL Draft.