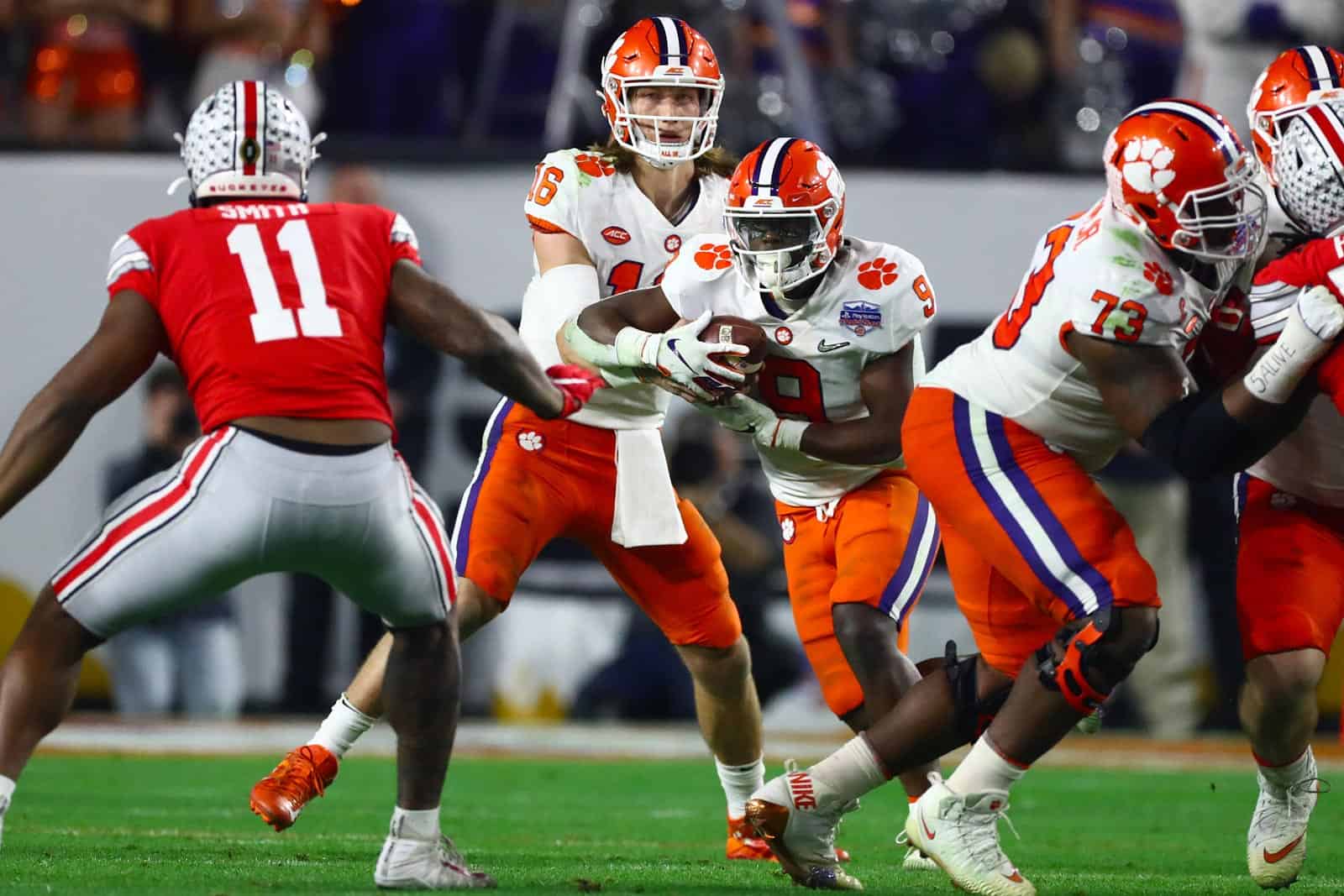 The fourth stanza of this season’s buffet of bowls is stuffed with seven contests – including the two CFP semifinal games – played in just two days.

The action begins on Thursday (Noon EST, ESPN) with an intriguing matchup (No. 24 Tulsa vs. Mississippi State – a 1.5-point underdog) in the Armed Forces Bowl. It’s one of three Power 5 vs. Group of 5 matchups in this set. Next up, flip over to CBS at 2pm EST for the only bowl game not on the ESPN/ABC family of networks – the Arizona Bowl – which features the MAC champ (Ball State) vs. the MWC champ (No. 22 San Jose State). The day wraps up early – at 4pm EST, ESPN – with Army trying to score its first bowl win over a Power 5 program in 35 years vs. West Virginia in the Liberty Bowl.

New Year’s Day (Friday) kicks off with (8) Cincinnati trying to prove the CFP committee made an error vs. (9) Georgia in the Peach Bowl (Noon EST, ESPN). An hour after that – at 1pm EST – don’t forget to switch over to ABC for the Citrus Bowl – Auburn is a 3.5-point underdog to (14) Northwestern.

That leads to what we’ve seen before but are anxious to see again anyway – the CFP semifinals starting with (4) Notre Dame vs. (1) Alabama in the Rose Bowl (in Texas) at 4pm EST on ESPN followed by (3) Ohio State vs. (2) Clemson in the Sugar Bowl (it’s still in Louisiana the last time we checked) at 8pm EST on ESPN.

This is Tulsa and Mississippi State’s first football meeting.

While it’s no surprise that Mike Leach has managed to take a Mississippi State offense that ranked No. 109 in passing yards per game in 2019 to a No. 16 national rank this season, it’s perplexing that it has struggled to score points. The Bulldogs, cranking out 311 air yards per game, are only averaging 20.7 points per game – that’s No. 109 nationally and No. 13 in the SEC. It’s an issue that may not get resolved vs. a Tulsa D currently ranked No. 23 nationally in scoring and is No. 22 vs. the pass. It’s the same unit that held SMU (averaging 318 passing yards per game, No. 14 in the FBS) to a mere 200 air yards earlier this season. What adds to the intrigue is a matchup between a Power program (hailing from the most powerful power league) that has only managed to win three games and a Group of 5 program that has only lost two games – a 16-7 loss in the opener to (21) Oklahoma State and then a 27-24 defeat at (6) Cincinnati in a conference championship game. The Armed Forces Bowl has “worth watching” stamped all over it.

Tulsa will be without junior LB Zaven Collins (tied for the third-most interceptions in the FBS) who, after being awarded the Bronko Nagurski Trophy (the best defensive player), declared for the NFL draft and announced he will opt out of the bowl game.

Mississippi State: freshman QB Will Rogers (#2) (No. 9 in the FBS in completion percentage), freshman CB Emmanuel Forbes (#13) (tied for the third-most interceptions in the FBS)

Ball State is 0-7 in bowl action. Its most recent appearance came in the 2013 GoDaddy.com Bowl, a 23-20 loss to Arkansas State.

San Jose State is 7-3 in bowl play. It hasn’t been bowling since downing Georgia State 27-16 in the 2015 Cure Bowl, also its fourth-consecutive bowl win.

This is the first ever football meeting between Ball State and San Jose State. The Cardinals have never beaten a current member of the MWC (0-3).

Other than the Sugar Bowl, this is the only bowl game featuring two conference champions. Ball State and San Jose State share the same offensive strength – throwing the ball. Where the Cardinals finished the season ranked No. 26 nationally in passing yards per game, the Spartans came in at No. 20. What separates the two is success defending the pass. Where San Jose State has been “ok” (No. 60 in the FBS vs. the pass), Ball State has not (No. 119 vs. the pass). Only eight teams in the nation have been more generous through the air than the Cardinals.

These two have only met three times previously but not since 1961. Army leads the all-time series 2-1, all three games were played at West Point.

There are two stellar matchups in this one. First up, it’s Army’s triple option offense (currently ranked No. 4 in the nation in rushing) taking on a West Virginia D ranked No. 24 nationally vs. the run. It’s the same defense that held four of its nine opponents to fewer than 80 rushing yards this season. Next up, it’s the Mountaineers’ passing attack (ranked No. 27 in the FBS and No. 2 in the Big 12) taking on a Black Knight D ranked No. 1 – in the entire nation – vs. the pass. Though both these programs are more recognizable by their respective offensive strengths, in 2020 they boast two of the top defenses in college football – Army is ranked No. 2 in scoring while WVU is No. 22 nationally and No. 1 in the Big 12.

West Virginia will be without senior LB Tony Fields II (tied for No. 22 in the FBS in total tackles) who has declared for the NFL draft and will not participate in the bowl game.

Cincinnati is 9-9 in bowl action. It downed Boston College 38-6 in last year’s Birmingham Bowl, also its second-straight bowl victory over a Power 5 member.

This is an intriguing matchup between two teams with elite defenses. The only difference is one roster is full of blue-chippers while the other is not. Georgia is ranked No. 21 nationally in scoring D and is No. 1 in the FBS vs. the run. Its’ weakness is vs. the pass, where it comes in at No. 91. This sets up ever so well vs. a Cincinnati offense ranked No. 15 nationally in scoring, No. 14 in rushing yards per game and a not-as-impressive No. 49 in passing. On the other side of the ball, it’s the Bulldogs’ solid – though not all world – offense (No. 32 in scoring, No. 44 in rushing and No. 60 in passing) taking on a stifling Bearcat D that is No. 7 in scoring, No. 19 vs. the run and No. 21 vs. the pass. Despite getting left out of the CFP bracket, this is Cincinnati’s golden opportunity to prove that not only can it hang with top-tier SEC talent – it can beat it. This is one of the most exciting matchups of the postseason.

Georgia will be without junior DB Eric Stokes (tied for the third-most interceptions in the FBS) who has declared for the NFL draft and will not participate in the bowl game.

Neither Northwestern nor Auburn have had much success finding the endzone this season. Where the Wildcats are averaging 23 points per game (No. 96 in the FBS), the Tigers are averaging 26 (No. 86). It’s a weakness that’s not likely to improve against the opposing team’s defense – Northwestern is No. 5 – in the entire nation – in scoring D (giving up 16 points per game) while Auburn is at No. 35 (allowing 24 points per game). With lots of old-world charm, expect this one to be hard fought and low scoring.

With the departure of Gus Malzahn, Auburn will be led in the Citrus Bowl by interim head coach Kevin Steele who has served as the Tigers’ DC since 2016. Moving into next season, Bryan Harsin – who has been the head coach at Boise State since 2014 – will take over the reins at Auburn.

Northwestern: freshman DB Brandon Joseph (#16) (No. 1 in the FBS in interceptions)

This year’s Rose Bowl has been moved from its home in Pasadena, California to Arlington, Texas due to “rising COVID-19 cases in Southern California.” It marks the first time the game has relocated since the 1941/42 season when it was played in North Carolina over fears of a west coast attack after Pearl Harbor.

While a lot of the chatter about this matchup rightly focuses on how Notre Dame’s defense will manage against Alabama’s elite ariel attack (No. 5 in the FBS) it would be a mistake to underplay the importance of the running game. Two key stats that separate the Irish’s win over Clemson (which shares similar statistical DNA with Alabama) and its loss to the Tigers are rushing yards gained and rushing yards allowed. First up, in the win Notre Dame earned 208 ground yards (in line with its season average of 218 yards per game). Compare that to the 44 total rushing yards it gained in the loss. Not only was that a season low, it’s the fewest ground yards the Irish have managed since Nov. 8, 2014 when they posted 41 rushing yards in a 55-31 loss at Arizona State.

Next up, in the win, Notre Dame held Clemson (which has averaged 164 rushing yards per game in 2020) to a mere 34 ground yards. It’s the fewest it allowed all season. Compare that to the loss when the Irish gave up 219 rushing yards. It was only the second opponent – all season – which managed to hang up 200-plus on the Irish. Though a lot of stars will need to align for Notre Dame to pull off a stunning upset vs. Alabama, rushing for 200-plus yards and holding the Tide to fewer than 100 ground yards could set the stage.

This one features one of the biggest mismatches, at least on paper, of bowl season. While yes, Ohio State is undefeated and ok, it’s beaten its six opponents by an average of three touchdowns – the Buckeyes have a dirty little secret. Ohio State’s defense is ranked No. 103 nationally and No. 14 (dead last) in the Big Ten vs. the pass. And it’s not like the Bucks have squared off with the “Murder’s Row” of passing teams this season. The best passing attack they faced was Indiana – averaging 258 passing yards per game (No. 39 in the FBS). How did it go? Well, it wasn’t pretty – the Hoosiers hung up a season-high 491 air yards in what was Ohio State’s narrowest victory of the season. It’s the same Buckeye D that gave up 232 passing yards to Rutgers (the No. 98 unit in the FBS, averaging 195) and 224 to Northwestern (No. 106, averaging 186).

It all leads to an obvious question – what will the OSU defense look like against Clemson – averaging 344 passing yards (No. 7 in the FBS)? These are the same Tigers that hung up 439 air yards on Notre Dame (No. 3 in the ACC vs. the pass) and 436 on Pitt (No. 7 in the ACC vs. the pass) in back-to-back appearances in November. Look for Ohio State to either defy its own numbers, or – to be exposed.