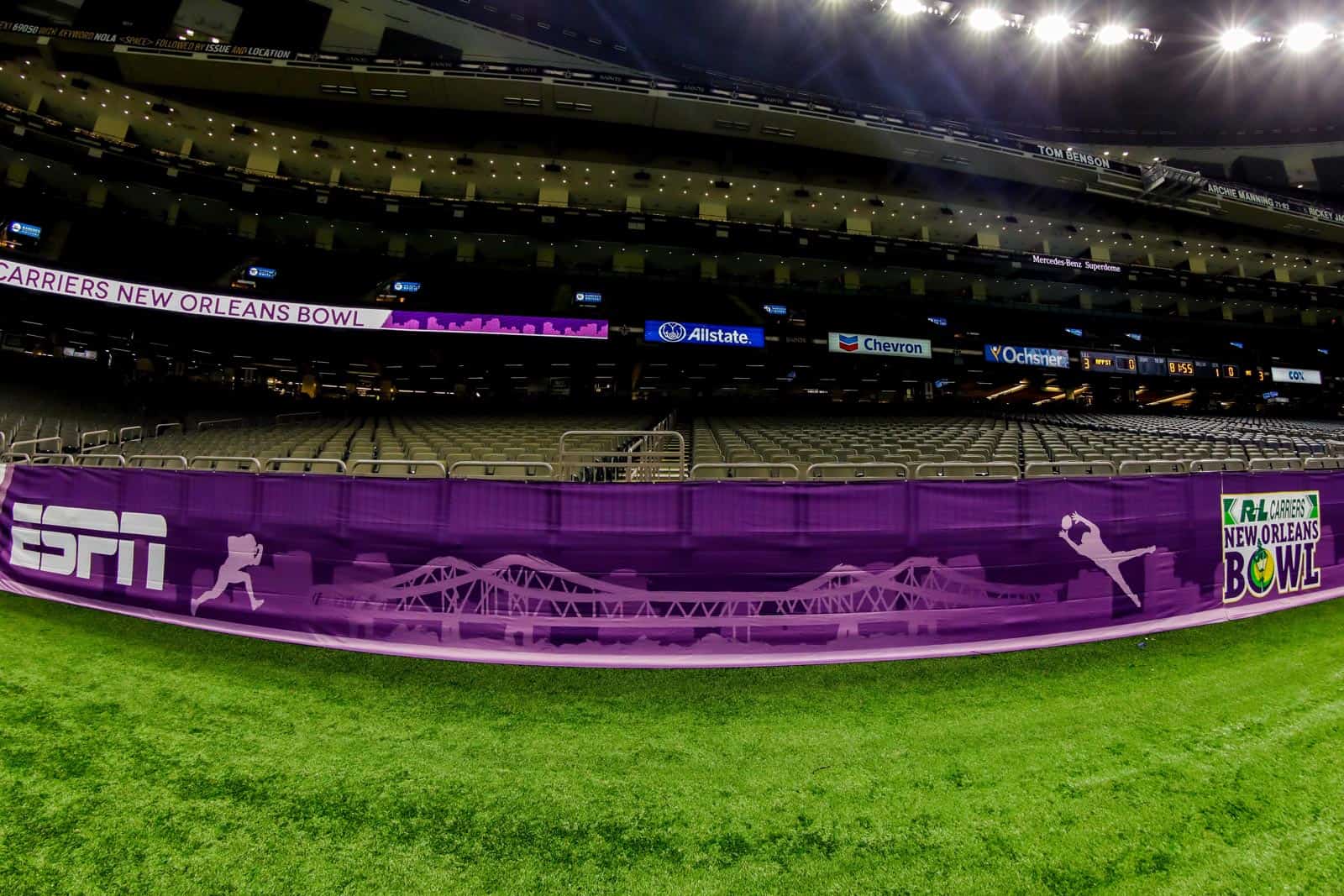 In true 2020 fashion, bowl season arrives with an unprecedented wave of opt outs, cancellations, and confusion. Despite the madness, the hour has arrived… it’s time to go bowling.

The action kicks off with five games spread from Monday through Wednesday, all airing on ESPN, meaning you won’t ever need to change your dial. What’s also important is to tune in early as three of the five contests are slated to start in the midafternoon.

Monday’s sole game and the official opener – the Myrtle Beach Bowl – kicks at 2:30pm EST. After that, on Tuesday and Wednesday, it’s a simple blueprint, two games each day, one at 3:30pm EST and then the next at 7pm EST.

Worth noting – and recommending – are Tuesday’s matchups. In the midafternoon it’s Vegas’ narrowest line of the subset, Tulane (a three-point favorite) vs. Nevada in the Famous Idaho Potato Bowl. After that, in primetime, it’s the Boca Raton Bowl which features the first ranked team in action this bowl season – (16) BYU – taking on UCF’s high-flying offense.

What follows is the first of five viewing guides designed to be your steadfast companion throughout each twist and turn of bowl-o-rama. It’s when to watch, what to watch for, and who to watch doing it.

It’s time to ice your beers and/or your yule log.

Appalachian State is a perfect 5-0 in bowl action, its most recent win came last season when it downed UAB 31-17 in the New Orleans Bowl.

This is the first ever football meeting between North Texas and Appalachian State.

North Texas: sophomore WRs Deonte Simpson (#9) and Austin Ogunmakin (#18), both have an opportunity to step up with the absence of senior WR Jaelon Darden (#1) (No. 1 in the FBS in receiving TDs and No. 3 in receiving yards per game) who has declared for the NFL draft and won’t play participate in the bowl game.

Appalachian State: senior DL Demetrius Taylor (#9) (tied for No. 16 in the FBS in tackles for a loss), sophomore OLB Brendan Harrington (#29) (tied for the second-most interceptions in the FBS)

Nevada is 6-11 in bowl play, most recently falling 30-21 to Ohio in last season’s Famous Idaho Potato Bowl. The last win came in the 2018 Arizona Bowl, a 16-13 overtime victory over Arkansas State.

Tulane and Nevada have only met once previously, during the 1992 regular season in New Orleans, a 34-17 win for the Green Wave.

Offensively speaking, these two teams are opposites. Where Tulane has been all about running the ball (ranked No. 17 nationally in rushing yards per game vs. No. 109 in passing), Nevada has gotten it done through the air (No. 9 in passing offense vs. No. 111 in rushing). This one will likely come down to how well each defense matches up with the opposing offensive weapon. The Wolfpack are currently ranked No. 30 nationally in rush D while the Green Wave are at No. 115 vs. the pass.

The intriguing matchup in this one is UCF’s super-charged offense (ranked No. 5 nationally in scoring and No. 2 in passing) trying to score points on BYU’s stingy defense (No. 3 in scoring and No. 24 vs. the pass). What could decide the ultimate outcome is a mismatch on the other side of the ball where the Cougars’ No. 11 ranked passing attack should look all-world against a Knight D ranked No. 117 vs. the pass.

UCF will be playing without senior WR Marlon Williams (#6) (No. 5 in the FBS in receiving yards per game) who has declared for the NFL draft and won’t participate in the bowl game.

Georgia Southern is 2-1 in bowl play. It picked up its first bowl loss last season, falling 23-16 to Liberty in the Cure Bowl. The most recent win came in the 2018 Camellia Bowl, a 23-21 victory over Eastern Michigan.

Louisiana Tech is 8-3-1 in bowl action. It most recently upset Miami Fla. 14-0 in the 2019 Independence Bowl, also its sixth-consecutive bowl win.

This is the first-ever football meeting between Georgia Southern and Louisiana Tech.

The key to Louisiana Tech winning its seventh-straight bowl appearance will be stopping Georgia Southern’s option offense, currently ranked No. 7 in the FBS, averaging 263 rushing yards per game. It will be no small task for a Bulldog D that has coughed up 300-plus ground yards twice in 2020, allowing 338 rushing yards and four scores in a narrow win over UAB (currently No. 29 in rushing offense) and then allowing 333 yards and six scores in the regular season finale loss at TCU (No. 24 in rushing offense).

Georgia Southern: freshman CB Derrick Canteen (#13) (tied for the most interceptions in the FBS), senior DE Raymond Johnson III (#0) (tied for No. 6 in the FBS in tackles for a loss)

According to BowlSeason.com, the Montgomery Bowl is a one-year-only replacement for the Fenway Bowl, which was originally scheduled to debut in Boston this season.

FAU and Memphis have only met once previously, in the 2017 New Orleans Bowl, a 44-27 victory for the Owls.

While you might not be surprised to hear that Memphis is ranked No. 17 nationally in passing offense, what if I told you FAU is ranked No. 12 – in the FBS – vs. the pass? It sets up for an under-the-radar, strength vs. strength matchup worth tuning in for. Where the Tigers are averaging 310 yards through the air per game, the Owls are allowing a mere 176. Now if only FAU’s offense – currently ranked No. 112 in scoring (averaging only 20 points per game) – could find a way to get on the board.