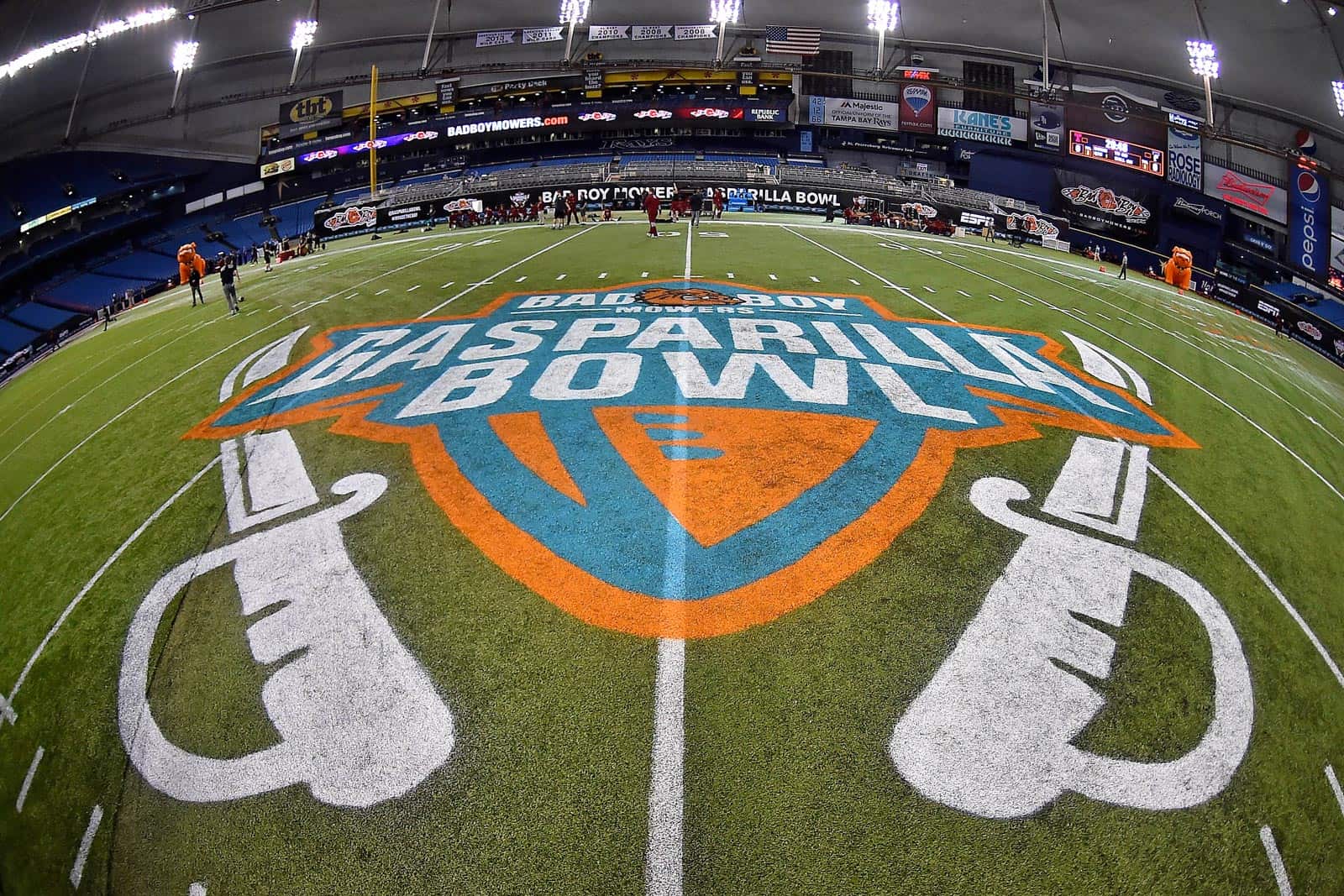 The second stanza of bowl season kicks off on Monday night and doesn’t end until late on Friday. As far as which network to tune in to, eight of the nine games air on ESPN. That means that there is only one time you’ll need to swap channels, 8pm EST on Friday night, when FS1 covers the Holiday Bowl.

The week kicks off promptly at 2:30pm EST on Monday afternoon with the Gasparilla Bowl. After that, tune in Tuesday evening (Christmas Eve) to the Hawaii Bowl at 8pm EST.

Friday is home to five games – the Military at Noon EST, the Pinstripe at 3:20pm EST, the Texas at 6:45pm EST, and the Holiday at 8pm EST (again, this is the only non-ESPN contest, instead airing over on FS1). The grand finale is the Cheez-It Bowl at 10:15pm EST.

Of the nine games, three feature first-ever matchups (the Military, Pinstripe and Cheez-It), two are reunions between old conference foes (the Gasparilla and Texas) and one is the first ranked vs. ranked matchup this bowl season (the Holiday).

As far as the best under-the-radar pairing – check out the Cheez-It Bowl, featuring the best passing attack in college football taking on a squad that runs the option to perfection. Though it may not come across as sexy at first sight, you’ll likely go to bed happy.

Marshall is an impressive 12-2 in bowl action. It beat USF 38-20 in last year’s Gasparilla Bowl, also its seventh-consecutive bowl win.

Marshall and UCF met consecutively from 2002-04 as members of the MAC and from 2005-12 as members of C-USA. The Knights moved to the American in 2013. UCF holds a commanding 8-3 advantage in the series and has won eight-straight.

This one will likely be decided by whether Marshall’s defense can manage to shut down UCF’s prolific offense. The Thundering Herd have earned solid numbers defensively – No. 40 in scoring, No. 35 vs. the run and No. 66 against the pass – but will be severely tested by a Knights’ attack ranked No. 6 in the FBS in scoring, No. 21 in rushing and No. 8 in passing. Only (2) Ohio State, (13) Alabama, (1) LSU, (3) Clemson and (4) Oklahoma have scored more points per game than has UCF this season (43).

Hawaii is 6-6 in bowl action. It lost 31-14 to Louisiana Tech in last season’s Hawaii Bowl. The most recent win came in the 2016 edition of the same game, a 52-35 victory over Middle Tennessee.

BYU and Hawaii have met 31 times previously, including on 19 occasions when the two shared membership in the WAC from 1979-98. The Cougars lead 23-8 all time and have won five-straight.

Both teams have elite aerial attacks – Hawaii is a lofty No. 6 nationally in passing yards per game (325.9) while BYU is No. 24 (285.6). While the Warriors have been more successful scoring points (a No. 33 rank vs. the Cougars’ No. 71 mark), overall BYU has been more successful defensively (No. 47 in scoring D vs. Hawaii’s No. 97 rank). This should be a high-flying affair with the most effective defense ultimately winning the day.

Miami and Louisiana Tech have met four times previously, first in 1979 and then three times between 2000-04. The Hurricanes are 4-0 vs. the Bulldogs and won the last two games by a combined score of 96-9.

Miami has played solid defense this season – No. 25 nationally in scoring, No. 16 vs. the run and No. 64 against the pass. This should make for a good matchup vs. Louisiana Tech’s No. 31 ranked passing attack, also the Bulldogs’ biggest offensive strength. On the other side of the ball, the Hurricane’s decent passing offense (No. 42 nationally) has an opportunity to shine vs. a La Tech secondary ranked No. 98 in the nation and No. 13 in C-USA vs. the pass.

Pittsburgh is 13-21 in bowl action. It got nipped 14-13 by Stanford in last season’s Sun Bowl, also its fourth-consecutive bowl loss. The most recent victory came in the 2013 Little Caesars Bowl, a 30-27 win over Bowling Green.

Pitt and Eastern Michigan have only played twice previously – in 2007 and 1995 – both were played in Pittsburgh and both were wins for the Panthers. The Eagles have never beaten a current ACC member (0-5).

Pitt has struggled epically to score points this season, averaging 20.1 points per game earning it a No. 115 rank nationally and a No. 13 mark in the ACC. The upside is, the Panthers have been successful defensively, currently ranked No. 31 in the FBS and No. 3 in the conference in scoring. This matchup is the story of two teams who’ve not played well offensively but who both have been more successful through the air than on the ground – Pitt is No. 46 in passing yards per game (compared to No. 121 in rushing) while EMU is No. 29 (vs. No. 119 in rushing). This puts the pressure squarely on the two pass defenses – the Panthers are No. 20 vs. the pass while the Eagles are No. 65.

Eastern Michigan: senior QB Mike Glass III (#9) (No. 23 in the FBS in passing yards per game), senior LB Kobie Beltram (#10) (No. 14 in the FBS in total tackles), senior DB Brody Hoying (tied for the sixth-most interceptions in the FBS)

Temple is 3-5 in bowl action. It lost 56-27 to Duke in last season’s Independence Bowl. Its most recent win came the year before in the 2017 Gasparilla Bowl, a 28-3 victory over FIU. The Owls have only scored a bowl win over a current Power 5 member once in history, besting Cal 28-17 in the 1979 Garden State Bowl.

This is the first-ever football meeting between North Carolina and Temple.

Neither of these teams have stood out statistically this season, both performing reasonably well across the board. They also share the same strength, throwing the ball – North Carolina is No. 25 in the FBS in passing yards per game while Temple is No. 39. This puts the pressure on each team’s defense. The Owls’ are No. 49 vs. the pass but gave up 363 and 457 air yards respectively in back-to-back games vs. (17) Memphis and at SMU in October (the Tigers are currently No. 26 in passing offense while the Mustangs are No. 12). The Tar Heels are No. 78 vs. the pass, coughing up 383 and 359 passing yards to Virginia and at Pitt in consecutive losses in November (the Cavaliers are No. 37 in passing offense while the Panthers are No. 46).

Michigan State is 12-16 in bowl action. It fell to Oregon 7-6 in last season’s high-flying Redbox Bowl. Its most recent win came in the 2017 Holiday Bowl when it destroyed then (21) Washington State 42-17.

This is the first-ever football meeting between Michigan State and Wake Forest.

When you think of Michigan State in the Mark Dantonio era, you think of stifling defense. While the Spartans are currently ranked No. 15 vs. the run, they’ve struggled – relative to MSU standards – to a No. 44 mark against the pass. Not only does that put them in the bottom half of the Big Ten, it sets up for an intriguing matchup vs. a high-flying Wake Forest offense that’s earned a No. 18 rank in passing yards per game. On the other side of the field, the Spartans have struggled epically to score points (No. 107 nationally) and establish the run (No. 116). The one ray of hope is their No. 60 ranked passing attack. While no where near potent, it may look much improved against Wake Forest’s secondary – ranked No. 97 nationally and No. 10 in the ACC.

The stellar matchup in this one is Oklahoma State’s No. 16 ranked rushing attack taking on Texas A&M’s defense, ranked No. 29 vs. the run. Where the Cowboys are averaging 236.25 ground yards per game, the Aggies are allowing a mere 129.08. The other storyline is Oklahoma State’s pass D, even though it’s poor No. 113 ranking is skewed by a full season in the pass-happy Big 12, it’s the third-worst unit in the conference meaning that seven defenses – including that of Kansas – weathered the aerial storm better than OSU. Texas A&M is currently ranked No. 54 nationally and No. 4 in the SEC in passing offense.

A rematch of the 2002/03 Orange Bowl (the most recent meeting and a 38-17 win for USC), these two have met nine times previously. The Trojans lead all-time 7-2 and have won six-straight.

These two teams are virtually polar opposites of one another. USC has a high flying, pass dominant offense and a below average defense while Iowa has an elite D and a questionable offense. The epic matchup – and one of the best strength vs. strength clashes of bowl season – is the Trojan’s No. 5 ranked passing attack taking on the Hawkeye’s No. 10 ranked pass D. Where USC is averaging a cool 336.9 air yards per game, Iowa’s only giving up 184.2. This one will be a lot like watching the History Channel take on the folks over at the Sci-Fi Network.

This is the first-ever football meeting between Air Force and Washington State.

Air Force has fielded a Top 20 defense this season, ranked No. 19 nationally in scoring and No. 14 vs. the run. The only unit to finish out of the top 15% of the nation is its pass D, coming in at No. 40. While this certainly isn’t tragic, it may be exposed vs. Washington State’s aerial attack, ranked No. 1 in the FBS. Though that’s not shocking, keep in mind that the Cougars are the only team in the nation averaging 400-plus passing yards and are averaging 57.5 more yards than the next nearest competitor – (1) LSU’s prolific offense (386.6). The other caveat in this one is how Washington State’s defense – ranked No. 95 in scoring and No. 78 vs. the run – will cope with Air Force’s option offense, ranked No. 3 in the FBS in rushing yards per game. This might just be one of the most entertaining bowl matchups of the season.

Air Force: senior K Jake Koehnke (#92) (tied for No. 1 in the FBS in field goal percentage and one of only two kickers who are perfect in field goal attempts in 2019)