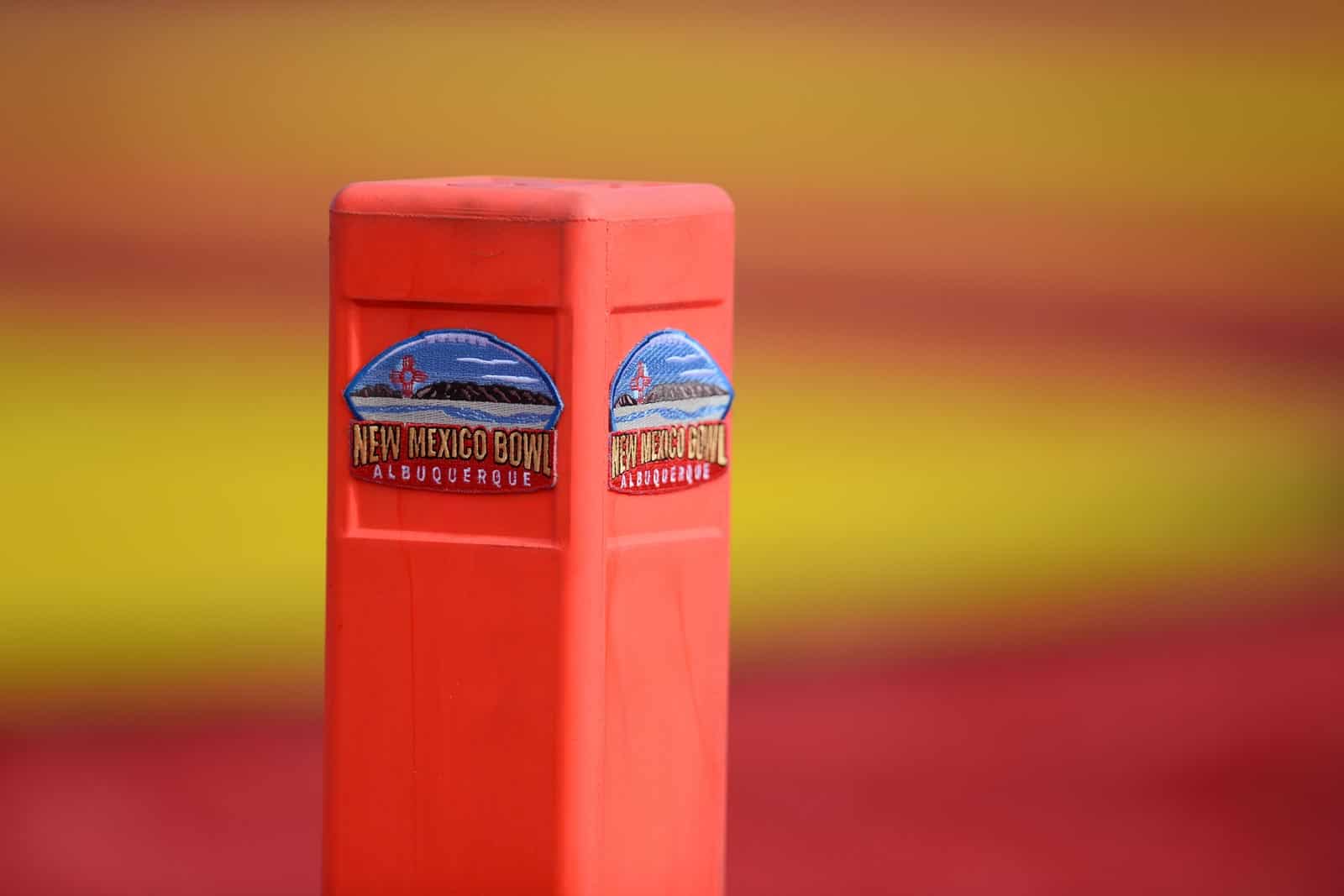 The college football bowl schedule kicks off early this Friday – at 2pm EST on ESPN – with the Bahamas Bowl. In the evening, it’s the Frisco Bowl at 7:30pm EST over on ESPN2.

Saturday serves up a full menu of seven games beginning with the Celebration Bowl at Noon EST on ABC. The mid-afternoon features the trio of the New Mexico Bowl (2pm EST on ESPN), the Cure Bowl (2:30pm EST on CBSSN) and the Boca Raton Bowl (3:30pm EST on ABC).

The evening starts early with the Camellia Bowl at 5:30pm EST on ESPN followed by the Las Vegas Bowl at 7:30pm EST on ABC. Things wrap up with the New Orleans Bowl at 9pm EST back on ESPN.

While this first stanza of the 2019 bowl-a-palooza might not seem as sexy as what’s ahead, keep in mind that there are four conference champions and two ranked squads playing in Saturday’s games. Also on offer are a plethora of delicious firsts: two FBS programs playing in their first-ever bowl game and two other squads attempting to score a bowl victory for the first time in program history. If that weren’t enough, five of the nine games are between teams who have never, ever met on the gridiron.

What follows is a blow-by-blow of when to watch, what to watch for and who to watch doing it. It’s the first in a six-part series that will boldly walk beside you this bowl season, feeding you information as you also feast on holiday goodness.

Gird your loins, friend. This is it.

Buffalo has never won a bowl game in program history, posting an 0-3 record all-time. Most recently it fell 42-32 to Troy in the 2018 Dollar General Bowl.

This is Charlotte’s first-ever appearance in a bowl game. It first fielded a football program in 2013 as an FCS independent and moved up to the FBS ranks in 2015.

This is the first-ever football meeting between Buffalo and Charlotte. The 49ers are 0-2 all-time vs. the MAC, losing to Eastern Michigan in a home-and-home series in 2016-17.

Buffalo: sophomore RB Jaret Patterson (#26) (No. 6 in the FBS in rushing yards per game)

Charlotte: senior RB Benny LeMay (#32) (No. 22 in the FBS in rushing yards per game), senior DE Alex Highsmith (#5) (tied for both the second-most sacks and second-most tackles for a loss in the FBS)

Most appearances: Louisiana Tech and Ohio (1-0) and San Diego State and SMU (0-1)

Kent State has never won a bowl game in program history. It most recently fell to Arkansas State 17-13 in the 2012 GoDaddy.com Bowl and before that lost to Tampa 21-18 in the 1972 Tangerine Bowl.

Utah State and Kent State haven’t met in 45 years, last playing a home-and-home in 1973-74. The visiting team won on each occasion, deadlocking the series at 1-1.

Utah State’s biggest offensive weapon – its No. 32 ranked passing attack – matches up well with Kent State’s strongest suit defensively, a No. 55 ranked secondary. On the flip side, the Aggies’ biggest defensive weakness – a No. 103 ranked rushing D – could get exposed by the Golden Flashes’ offensive strength, a No. 44 ranked ground attack. Both defenses have struggled this season, especially vs. the run, the one that best steps up will likely win this one.

While both teams have elite defenses (North Carolina A&T is ranked No. 10 in scoring while Alcorn State is No. 12), the Aggies’ D has been the more complete of the two on paper, also ranked No. 1 vs. the run and No. 19 vs. the pass (compared to the Braves’ No. 34 and No. 38 rankings in the same categories). Throw in the fact that both offenses have scored a lot of points this season (North Carolina A&T is No. 16 in scoring and Alcorn State is No. 25) and it sets up for a marvelous battle of strengths.

Central Michigan is 3-8 in bowl play. It most recently fell 37-14 to Wyoming in the 2017 Famous Idaho Potato Bowl, also its fourth-consecutive bowl loss. The most recent victory came in the 2012 Little Caesars Bowl, a 24-21 win over Western Kentucky.

This is the first-ever football meeting between Central Michigan and San Diego State.

Liberty is bowl eligible for the first time in program history, it moved up to the FBS ranks as an independent in 2018.

Georgia Southern has never lost a bowl game, winning in both its all-time appearances: the 2018 Camellia Bowl (a 23-21 win over Eastern Michigan) and the 2015 GoDaddy Bowl (a 58-27 win over Bowling Green).

This is the first-ever football meeting between Liberty and Georgia Southern.

This pairing offers two significant mismatches – first, tune in to see Liberty’s No. 21 ranked passing attack do its thing against a Georgia Southern defense ranked No. 91 vs. the pass. Next up, and perhaps most frightening, check out the Eagles’ option offense – ranked No. 8 nationally in rushing yards per game – against a Flames’ D ranked an egregious No. 100 vs. the run. This one ought to be entertaining.

This is the first-ever football meeting between SMU and FAU.

What you’ve got here are two proficient passing offenses taking on defenses which have struggled vs. the pass. SMU is ranked No. 12 nationally in passing yards per game while FAU is No. 30. On the flip side, the Mustangs are an awful No. 121 vs. the pass (only nine teams in the FBS have been more generous) while the Owls are a more respectable No. 81. While the two squads’ schedules aren’t necessarily an apples-to-apples comparison, overall FAU has the better defense, earning a No. 33 rank in scoring (22.3 points per game) vs. SMU’s No. 93 mark (31.3).

With the Owls’ Lane Kiffin stepping down to take the head job at Ole Miss, FAU will be led by interim head coach Glenn Spencer. He has served as the defensive coordinator for the Owls since December 2018, prior to that he was the DC at Charlotte for a single season, a role he took on after a ten-year run at Oklahoma State. Former Florida State head coach Willie Taggart will take over the reigns at FAU in 2020.

The most compelling matchup in this one is Arkansas State’s potent aerial attack – ranked No. 14 in the FBS – taking on an FIU secondary that’s ranked a lofty No. 6 (nationally) vs. the pass. On the other side of the ball, you’ve got the Golden Panther’s below average offense (No. 84 in scoring, No. 60 in rushing and No. 91 in passing) taking on a Red Wolves’ defense which has struggled epically this season (No. 115 in scoring, No. 122 vs. the run and No. 104 vs. the pass).

Boise State is 12-6 in bowl play. It earned a spot in last season’s First Responder Bowl vs. Boston College, but the game was cancelled due to weather. Its most recent win came in the 2017 Las Vegas Bowl when it upset Oregon 38-28.

A rematch of the 2012 Las Vegas Bowl (a 28-26 win for Boise State), these two have met four times with each contest being played since 2007. The series is deadlocked at two games apiece.

Washington: sophomore PK Peyton Henry (#47) (tied for No. 7 in the FBS in field goal percentage)

The Las Vegas Bowl will be Washington head coach Chris Petersen’s final game on the sidelines. Petersen announced he was stepping down in December and will be replaced by Jimmy Lake who has been an assistant at Washington since 2014 most recently serving as the DC.

Appalachian State is a perfect 4-0 in bowl play. It moved up from the FCS to the FBS in 2014 and has been to a bowl game, and won it, in every season it’s been eligible to.

UAB is 1-2 in bowl action. Its 37-13 win over Northern Illinois in last season’s Boca Raton Bowl was the first in program history.

This is the first-ever football meeting between Appalachian State and UAB.

UAB has a solid defense – ranked No. 25 nationally in scoring, No. 13 vs. the rush and No. 13 against the pass. It sets up as an excellent test of strengths vs. App State’s offense – ranked No. 9 in scoring and No. 17 in rushing. What may ultimately cost the Blazers is their offense, which has struggled to find the endzone this season (No. 100 in scoring) taking on a Mountaineer D ranked No. 22 in scoring.

With the departure of Eli Drinkwitz to Missouri, Appalachian State will be led in the New Orleans Bowl by new head coach Shawn Clark. Clark played offensive line at App State (1994-98) and after a series of coaching positions across the country landed back at his alma mater in 2016 as an O-line coach.