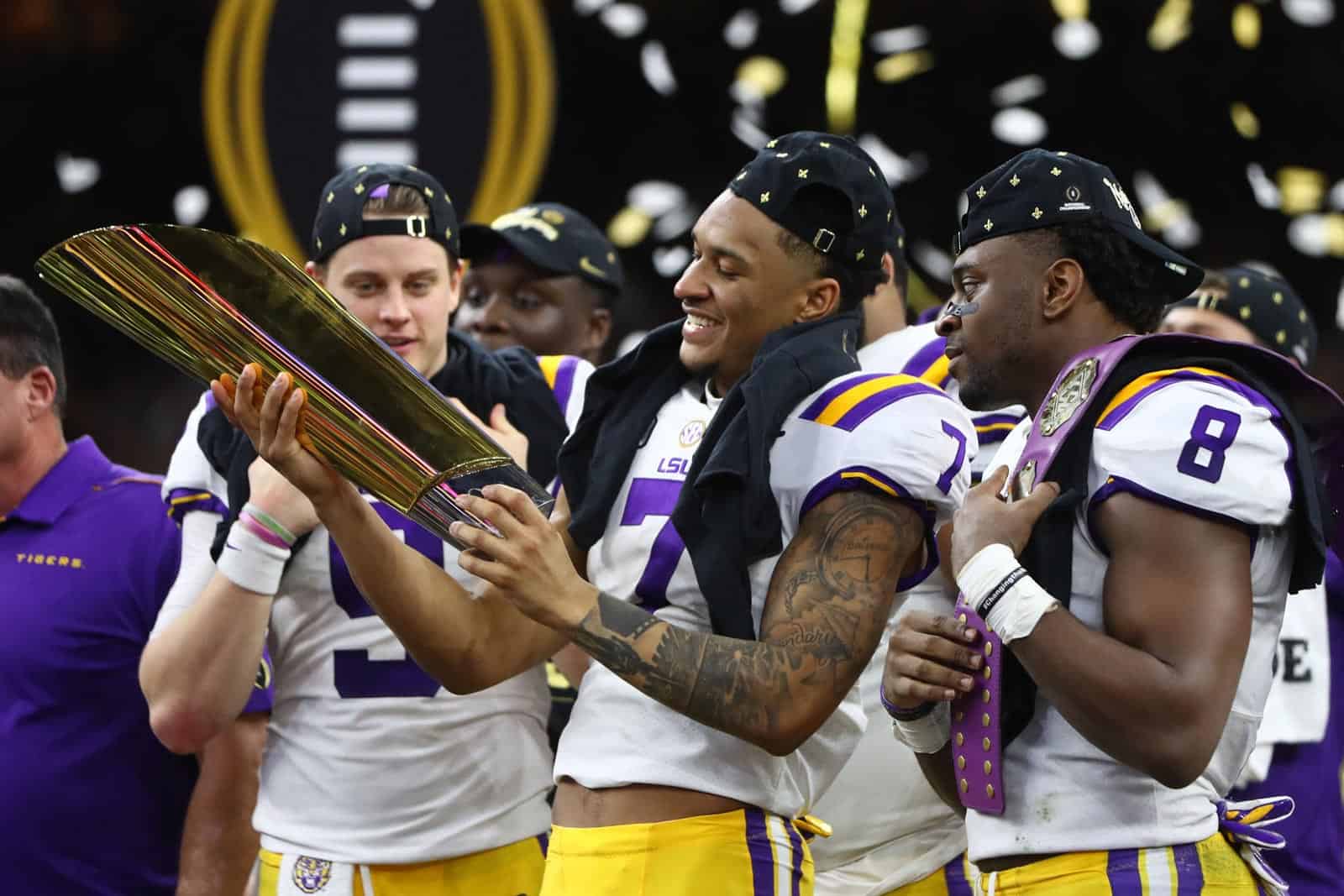 The college football bowl games for 2020-21 will be announced throughout the week, with the College Football Playoff and New Year’s Six selections and schedule appearing on Sunday.

Due to the regular-season being pushed back to conclude on Saturday, Dec. 19, several bowl game matchups and invitations have already been announced.

Below we will live blog the bowl games and pairings as they are announced on Sunday. The College Football Playoff Semifinals are expected to be announced first at 12:15pm ET on ESPN.

Sunday, 5:18pm:  We seem to have hit a holding pattern while they decide who can fill out the remaining games. I’ll return a bit later with any updates. Thanks for hanging out today – see you soon!

Sunday, 5:05pm:  The Independence Bowl has now been canceled.

Sunday, 4:37pm (!):  No Guaranteed Rate Bowl this year. The bowl is a casualty of COVID-related opt-outs.

Also, Indiana vs. Ole Miss in the Outback Bowl.

Sunday, 4:07pm:  As the SEC schedules its final few games, it announces Kentucky vs. NC State in the Gator Bowl.

UAB will play in the Gasparilla Bowl.

Sunday, 3:19pm:  Louisiana vs. UTSA in the First Responders Bowl.

Sunday, 3:11pm:  It’ll be Northwestern vs. Auburn in the Citrus Bowl.

Sunday, 2:33pm:  The first domino to fall in over two hours, as Oklahoma-Florida will be the Cotton Bowl matchup.

Peach:  Cincinnati vs. Georgia
Fiesta:  Oregon vs. Iowa State
Orange:  Texas A&M vs. North Carolina (we knew this already, but)

Sunday, 2:00pm:  I’ll just go ahead and let our good friend Jon sum up this day:

It’s taken 2 hours for ESPN to tell us two bowl matchups and ranking the top 6 teams.

And now ESPN’s going to delay the rest, because of course they are.

Ohio State-Clemson on New Year’s Day in Arlington. We know that, at least.

Nebraska announces it will not play in a bowl game. Basically guarantees at least 3 bowls will be canceled today, sources told @Stadium

Sunday, Noon:  Good day, friends! I’ll again be your tour guide through the bowl announcements, playoff teams, and other various announcements. The interesting questions will be whether the Big Ten will relax its COVID protocols, and whether we even have enough teams to play a full bowl schedule. Ride along and leave your thoughts in the comments section!

Some more of the bowl matchups we know thus far:

Friday PM:  Utah is now out of a bowl game. Here’s the latest list of opt-outs:

Utah becomes the latest team to publicly opt out of a bowl game. Running list of, for now, the 14:

Thursday PM:  Another team has bailed on the postseason:

Saturday’s game will mark the end of the @UCLAFootball 2020 season.

Wednesday PM:  More teams have bowed out of bowl games. Virginia Tech and Kansas State declined bids Wednesday — which didn’t seem to move the needle much, aside from Tech’s 27-season bowl streak coming to an end.

#Hokies Justin Fuente confirms that Virginia Tech will not play in a bowl game.

Then came the big one.

It was (somewhere) spoiled early Wednesday afternoon via this tweet:

Brady Hoke says the Aztecs are a bowl eligible team and are actively searching for a chance to play.

With some cancelations there are fewer options. If they don't find anything out by next week they'll move forward to 2021.

Said the team practiced this afternoon.

The Aztecs apparently didn’t get the answer for which they hoped, so they’ll also be out.

Tuesday PM:  Another bowl game bites the dust. The Tropical Smoothie Cafe Frisco Bowl has been canceled, due to COVID cases within the SMU program. UTSA will now participate in the SERVPRO First Responders Bowl — ironically, enough, to be played at SMU’s Gerald J. Ford Stadium.

Monday PM:  Some more significant items were unveiled over the last few hours, including:

It’s official! The @MountainWest Champion will be playing for a title in Tucson at the 2020 Arizona Bowl. @BroncoSportsFB and @SanJoseStateFB will battle for the bowl on Saturday in Vegas. We will see you on @CBSSports on NYE. pic.twitter.com/v5FJW1lpo7

What a crazy day. Let’s do it again soon, shall we?

Monday AM:  Hi again, friends! Brian here, and we’ll go through year number nine of revealing bowl selections as we’re made aware of them. The process won’t be as chaotic this year as it usually is — well, okay, maybe it will be, but in a different sense — especially considering how many teams have opted out.

It’s been suggested that BYU and Liberty may be left out of bowls altogether, which seems unconscionable with the Cougars and Flames at 10-1 and 9-1, respectively. Both teams spent significant time in the top 25 this season, further bolstering their cases. However, with just north of 30 bowl games — for now — scheduled to be played, the proverbial music may stop with the two schools too far away to grab a chair.

Bowl bids to date via @Stadium: