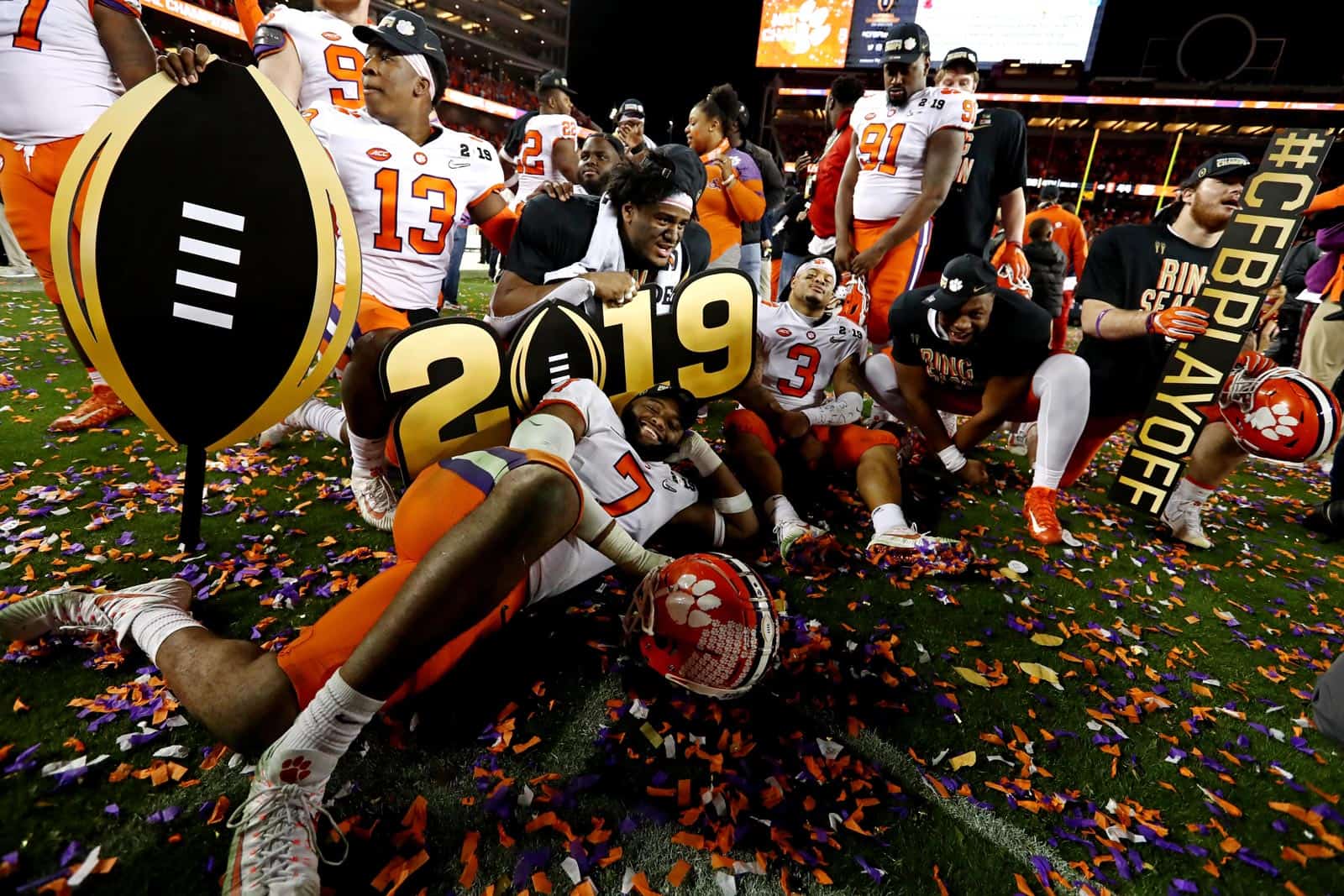 The college football bowl games for 2019-20 will be announced today, including the College Football Playoff and New Year’s Six selections and schedule.

Below we will live blog the bowl games and pairings as they are announced. The College Football Playoff Semifinals are expected to be announced first at 12:15pm ET on ESPN.

Bowl games hosting the College Football Playoff Semifinals this season are the Chick-fil-A Peach Bowl at Mercedes-Benz Stadium in Atlanta, Ga., and the PlayStation Fiesta Bowl at State Farm Stadium in Glendale, Ariz.

This season’s College Football National Championship will be played at Mercedes-Benz Superdome in New Orleans, La., on Monday, Jan. 13, 2020.

4:45pm:  That should — I think — put a bow on this year’s bowl schedule. Thanks for following along today, and remember to keep us bookmarked here at FBSchedules for all of your postseason scheduling needs. As always, we appreciate your support!

4:34pm:  Tennessee definitely got its wish. No further commentary:

The Vols are headed to the 75th @taxslayerbowl to play Indiana.

4:32pm:  Tennessee apparently got its wish:

4:30pm:  At least one of the SEC bowls is official, finally:

4:18pm:  Well, we were done. Now certain schools have caused this:

SEC Bowl Pool games to be announced at 4:30 ET. Participants determined by @SEC after conversations with bowl partners & discussions with school personnel to create a lineup of compelling bowl games for teams and fans. Goals include no repeat appearances within 3-year period.

4:03pm:  To finish off our friend Jason’s tweet a bit ago, the Birmingham Bowl:

Bearcats in Birmingham!@GoBearcatsFB takes on a #Pow6r opponent in the TicketSmarter Birmingham Bowl to kick off the new year. Cincinnati faces Boston College for the first time since 1997. pic.twitter.com/9bFxjc0Fn7

4:00pm:  Ohio vs. Nevada will be the battle for all the spuds in the Famous Idaho Potato Bowl.

The 2019 SERVPRO First Responder is set! @WKUFootball will play @WMU_Football on Dec. 30th at Gerald J. Ford Stadium. Grab your tickets and join us for kickoff at 11:30 a.m. in Dallas, TX. #SFRB

3:55pm:  Boise State and Washington to the Las Vegas Bowl. Chris Petersen against the Broncos in his final game was the obvious outcome here. Also:

Music City has flipped Tennessee for Mississippi State against Louisville. VaTech-Vols in Belk it appears.

3:52pm:  Thanks to Nick in the comments for calling my attention to this:

3:50pm:  Our good friend Jon Schaeffer sends this along:

Just in: The Aztecs will face Central Michigan on December 21st in the New Mexico Bowl at 11 a.m. PST on @XTRA1360.

3:48pm:  Pittsburgh and Eastern Michigan will be your QuickLane Bowl matchup in Detroit.

3:46pm:  We love SIDs here at FBSchedules, so here’s an announcement from one of our favorites:

January 2 at 3 pm ET on ESPN.#WeAreBC

Your Tulane Green Wave will play in the @ArmedForcesBowl vs. @SouthernMissFB.

3:34pm:  Three announcements, and a correction:

3:32pm:  San Diego will host USC and Iowa in the Holiday Bowl.

3:23pm:  Not an FBS bowl, but I owe Alcorn State and North Carolina A&T some love for their trip to the Celebration Bowl, featuring the champions of the two HBCU conferences in FCS.

3:20pm:  Wake Forest and Michigan State will take their talents to Yankee Stadium for the Pinstripe Bowl.

Hawaii-BYU will play in Hawaii Bowl

3:11pm:  The flood gates are open. Here are more matchups:

3:09pm:  The Music City Bowl should have little problem selling tickets; Tennessee and Louisville will be its combatants.

3:07pm:  Alabama and Michigan will compose the Citrus Bowl matchup, per McMurphy.

Bowl announcement with the football team at 3pm in Demoss 1284! #RiseWithUs

12:30pm:  ESPN indicates the remainder of the rankings from teams 5-25 will be released at 3:00 (Eastern). We’ll have those here, and will continue to provide bowl updates as we have them throughout the afternoon.

Stadium’s Brett McMurphy indicates LSU-Oklahoma will be the Peach Bowl, with Ohio State-Clemson the Fiesta.

12:16pm:  The pairings were due one minute ago. We’re in a commercial at the moment, so it should — hopefully — be any minute now. They’re probably on set browbeating David Pollack into admitting that he likes stats.

10:00am (Eastern):  We have six bids confirmed, out of 78. This from Stadium’s Brett McMurphy, whom we’ll cite quite a bit as the day wears on:

Navy is #23 right now at 9-2. What if they lose to a subpar Army team this year? Will the CFP rankings change? Not fair for them to keep that ranking. I hope they lose just to see how they decide. In my opinion, Army vs. Navy needs to kickoff the regular season in week 0, not a week after the season ends.

Needs to change. It was so tacky they played in the AAC Championship game a few years ago before their REGULAR SEASON had finished.

See, I love the pageantry of Army-Navy, especially as the son and nephew of two sailors. That said, you’ve got a fair point. There needs to be a way to not lose the special feel around that game (and the occasional snowstorm in which it’s played), while still accounting for final season rankings.

I feel bad for Toledo the only Bowl Eligible team at 6-6 not to go to a bowl game. Next year there will be three more bowl games.

I’m surprised they didn’t get in over Eastern Michigan (6-6) who they beat head to head in same conference. Toledo May have declined a bid.