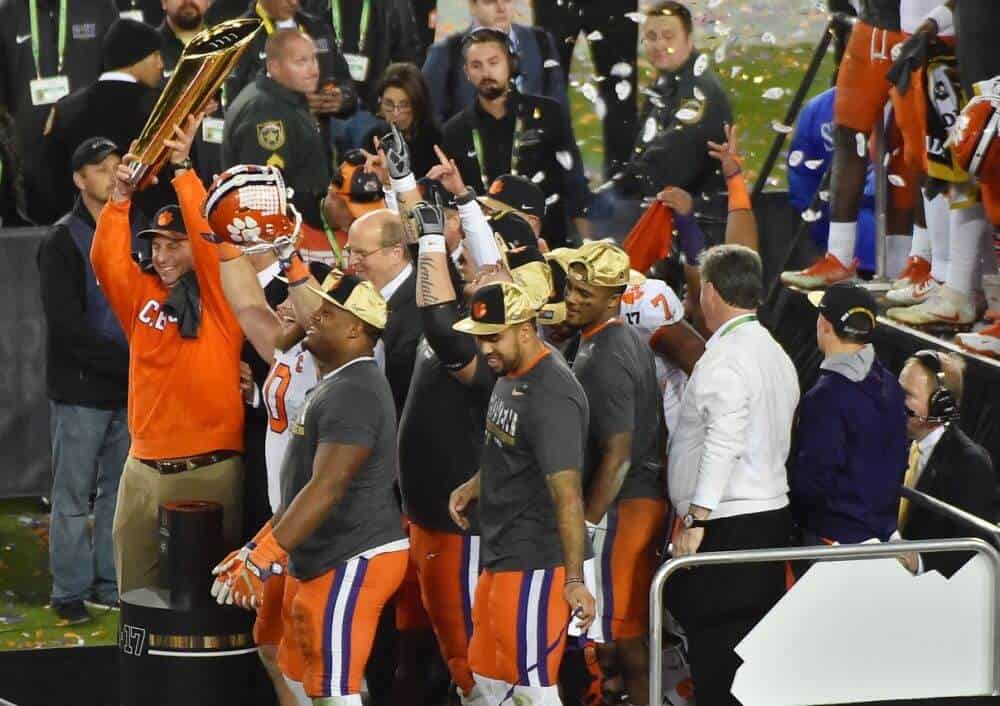 Clemson won its first national title since the 1981 season Monday night, getting a two-yard touchdown pass from Deshaun Watson to Hunter Renfrow to defeat Alabama, 35-31.

The Tigers capped the victory with a nine-play, 68-yard drive over nearly the entire final 2:01, a drive for which Watson was clearly prepared.  “I just smiled right when they scored,” Watson told the media after the game. “I (saw) the two minutes and one second on the clock, and I just smiled, and I just knew.”

Clemson compiled 511 yards of total offense in the contest, with Watson accounting for 463 of those yards.  The junior, who announced his intent to leave school for the NFL after the game, completed 36-of-56 passes for 420 yards and three scores.  The Tiger signal-caller also carried 21 times for 43 yards and a score.  Renfrow’s game-winning catch was his tenth, as the redshirt sophomore from Myrtle Beach, S.C. finished with 92 yards and two touchdowns.

Both teams finished the season 14-1.

Alabama opens the 2017-18 campaign September 2, facing off with Florida State in the Chick-fil-A College Kickoff in Atlanta’s new Mercedes-Benz Stadium.  Clemson will host Kent State on that same day to begin its defense of the national title.

From a Bama fan: congrats Clemson! You guys played great, and you certainly deserve your prize. You did the one thing you needed to do to win the game: make Jalen Hurts feel pressured. These last two nattys are by far the best i’ve seen. good luck to you guys next season!

Thank You Bama Fan. The greatest honor of the Tigers in winning the National Championship was we beat the ‘absolute best’. The very word “Alabama” rings of the best in College Football. We were so honored to have finally beat your truly great team. I humbly suggest we have a rubber match next year, and, good luck to you guys. We all look forward to your first game with Florida State. Beatum!!!!!

Agreed. A home and home would be nice. If only our AD wasn’t such a little coward…

Congrats to Clemson & the ACC this year. Outstanding 2nd half, I actually had Clemson winning 31-28 in OT. The match up with Waston vs Hurts seem to be the upper hand & even though Hurts ran in the last Bama TD, it left way to much time on the clock for Waston & his receivers to work their magic.

What you gonna do now?Watson is gone…LOL!!! Ya’ll will be lucky to win 5 games this season and won’t ever see another national championship,so enjoy the one you have no, cause it will be 35 more years if ever at all before you see another!!LOL!!COME TO THE BIG HOUSE AND YOU CAN SEE ALL 16 OF BAMA’ S

your name suits you ,it should say weasel , we should have beat Alabama last year cheap on side kick , ole nick new he was going to loose , so this year we took your running back out by breaking his leg ,go tigers ,how bout that !we got 90 percent of our players back and 2 5 star quarter backs ,Alabama always has 5 star players ,everyone of them , all year all we heard was Alabama front 7 , we ran 99 plays on them , we tired those fat asses out , we should have won it last year and we did this year with a walk on 3 star , you better watch your mouth ,your first game is florida state , you are going to have to take another power house ACC TEAM , THE ACC IS THE POWER HOUSE NOW , WASHINGTON GAVE ALABAMA A FIGHT FOR THE MONEY,DID YOU SEE WHAT WE DID TO OHIO ST AGAIN , AND OAKLAHOMA LAST YEAR , WE BREAK UP THE SEC AND BIG 12 , AND SO CALLED BIG 10 , OH YES WE BEAT OHIO ST 30-0 REMEMBER, THEY WIPPED ALABAMA IN NATIONAL CHAMPIONSHIP,SO THERE YOU GO, CHECK YOUR SELF

David: Please Clemson has just recruited the best high school Quarterback in the Nation in Hunter Johnson, plus a High school junior, Trevor Lawrence from Cartersville Ga has already committed to Clemson. I think we will be AOK. Not to fret about Clemson. Another fact is,our three greatest Coaches: Frank Howard, Danny Ford and of course DABO learned there trade at and from Alabama. We have truly learned from you guys how to win “and keep winning”. We not going anywhere!

You guys did just lose right?

Clemson has been building toward this for years. I guess they’re not “paper tigers” after all.