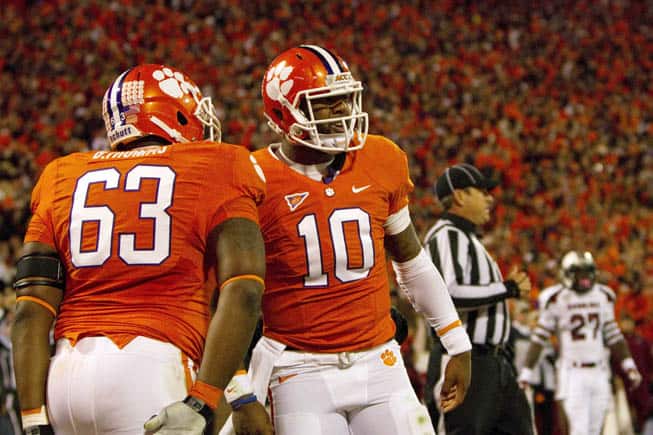 The Clemson Tigers have added the Georgia State Panthers to their 2014 football schedule, the AJC has reported.

Clemson will host Georgia State at Memorial Stadium, also known as Death Valley, on a date to be announced in 2014. The game will be the first ever meeting between the two schools and the Panthers will receive $700,000.

The addition of Georgia State completes the 2014 non-conference schedule for Clemson. The Tigers open the season on the road at Georgia on Aug. 30 and then return home to host Coastal Carolina on Sept. 6.

Georgia State has also tentatively completed their non-conference slate in 2014. GSU is currently scheduled to travel to Chattanooga on Sept. 6, host Air Force on Sept. 13, and travel to Washington on Sept. 20.

Who cares! Another one of those boring, one sided money games.

Clemson needs a win to offset the butt whipping South Carolina will lay on them and in 2014, it’ll be 6 in a row.

Sorry, I didn’t see a butt whipping!!!!! Don’t brag too big you just might fall.

Obviously you care considering you’ve taken the time to comment.

So much for improving strength of schedule for the CFP. Coastal Carolina AND Georgia State? I guess Georgia State will be FBS (barely) in 2014….

Clemson had Central Michigan on the schedule, but dropped them when the ACC announced they were going to 9 games.

The ACC then decided to stay at 8 games, so most teams were a game short. Enter Georgia State. CMU would have provided a little better competition.

The Georgia State at Chattanooga game in 2014 has already been cancelled.

Do you have confirmation? Have not seen official cancellation yet.

Not sure if there’s confirmation, but it appears likely to be cancelled since Georgia State is now FBS.

Still hasn’t happened though. We’ve been checking with GSU and no formal cancellation has occurred. Yet.

Maybe you can find out the terms of the agreement for the game to see if there is a possible financial reason that it won’t be cancelled or the announcement has not been made? Perhaps GSU won’t announce the game is cancelled until they have a money game in its place to facilitate the buy-out of the Chattanooga game. I am suggesting that it might be finally cancelled with a simultaneous announcement that GSU has booked a game in its place that pays for the cancellation. Or possibly GSU can move the game to Atlanta for a fee?

I have a copy of the contract. When I get a chance, I’ll let you know what it says. I had this discussion on Twitter before, but just want to make sure I’m correct.