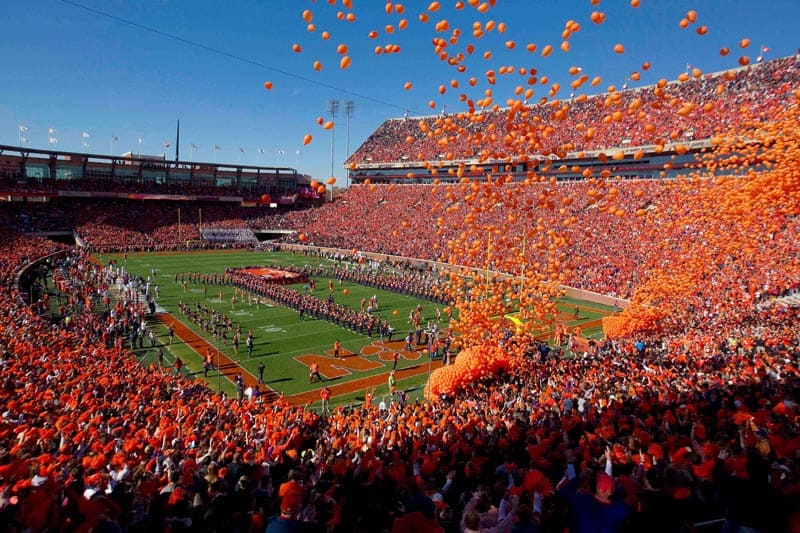 The Clemson Tigers have added games against the Georgia Southern Eagles and the Charlotte 49ers to their future football schedules, the school announced today.

Clemson and Georgia Southern will square off on the gridiron for the first time at Memorial Stadium in Clemson on Sept. 15, 2018. The Eagles will receive a $1.1 million guarantee for the game.

The Charlotte 49ers will also be a first-time opponent for Clemson when they make the trip to Death Valley in 2019. Charlotte is moving up to the Football Bowl Subdivision and officially joins Conference USA on July 1.

The addition of Georgia Southern and Charlotte tentatively completes the non-conference schedule for Clemson in both 2018 and 2019. Other games scheduled for the Tigers in 2018 include Furman (Sept. 1), at Texas A&M (Sept. 8), and home vs. South Carolina (Nov. 24).

Clemson’s 2015 football schedule was also released today. The Tigers open the season at home against Wofford on Sept. 5.

Wow…Scheduling a team currently in FBS transition and another that will just starting the transition btw the also have current FCS schools on the schedule both years too.

GS is no longer a transition school. The Eagles are no cupcake.

Yes, most do. SEC teams play the least number of P5’s OOC, the most FCS schools and cream puffs. We saw why as the supposed mighty SEC west got sh*t stomped in bowls after playing pathetic OOC’s.

@schoup: Playing OOC’s has absolutely nothing to do with how the bowl games turn out. SEC West won 2 of them, 3 was close calls & yes the Mississippi teams did not fare to well.

That’s my tigers baby. Not sure how thrilled I am about the possibility of playing two great triple option teams in the same year but at the same time nothing but respect to Clemson. Just another reason I’m a tiger. With the lack of respect the ACC gets this will definitely leave them with one of if not toughest schedules in the country. Dabo is the most underrated coach of the elite coaches in college football. Clemson wants to play anyone anywhere. I personally can’t wait for Notre Dame to come to Clemson. I’ll be at that one. The last time ND came to Clemson. My dad was a safety for the Tigers and Joe Montana lead the Irish to a second half come back win which then lead to their national title. Can’t wait. Maybe our title year. Long ways away but with a strong defense and a healthy Deshaun Watson, very achievable.

Georgia Southern lost to GT by 4 points and almost pulled off the upset….Clemson lost to that same team by 22 pts and was never really in the game. I hope that’s a $1.2 million *ss kicking courtesy of the Eagles.

Keep hoping David. Yeah Cole will remember that game for a long time, just glad he left on a high note and will now be able to return to Clemson in the future for some games. Haha You do know we are gearing up for a long stretch of national title runs. We are about to blast off. Taking to yet another level. We are one of four teams the four years to win 10 or more games. Dabo has beaten in his last three bowls, Urban Myer- when OSU was undefeated and ranked 3rd, Les Miles & Bob Stoops, all three coaches have national titles. And Dabo is about to get his here soon. A big fan of Georgia Southern, have seen them live many times. A great up and coming program, but a bad time to face the tigers. But good luck otherwise.

You sound like your SID Dabo. Cole had nothing to do with the 28 pts that your “best ever” defense gave up. And GSU had a better offense than GT had this year. Not bad for a “transition” team with fewer scholarships to offer. We’re only going to get better over the next few years. We know a few things about National Championships, we’ve got 6 of them in our pocket without the asterisk or probation. I’m not saying that we are there yet, but come 2018 when we’ve got a few more “franchise” wins and impact players…who knows. Heck, in 2018, Brent and Dabo could be gone especially if they’ve gone 0-6 versus FSU & SCar and haven’t delivered a NC.

Very wrong about Cole. His first pass play was a 95 yrd pick six. He was 3-11 for 19 yards and three interceptions. He may have even thrown two pick sixes that game. Not positive on that one. So I believe our great defense possibly the best ever only gave up two or three scores to that potent offense. And as much repsect as I have for GSU they aren’t as good as GT. And our two freshman Qbs that have already arrived in Clemson will be putting us on the same level as OSU was this year with depth at qb. Go ahead and check these two guys out, Tucker Isreal and Kelly Bryant. Tucker set evey 6A passing record in Florida. So I would say he did directly impact the game. Again keep hoping Dabo and Brent will be gone but they won’t. Dabo said this is a final destination job and said Clemson can and will be a good as any other program in the nation. Dabo would only leave Clemson for Alabama and that will only happen if Saban leaves. Also Brent has already said he doesn’t want to be a head coach assuming he doesn’t change is mind with the success he will continue to have.

Georgia Southern is an up and coming FBS team. Eagles will certainly sell their ticket allotment and bring some excitement to Death Valley for an OOC game.

49ers will zoom in on concussion-proof hovercrafts and zap the evil Tigers with death rays in 2009! Death Valley’s orbital stadium will crash into lower orbit Carter-Finley, resulting in massive loss of Sin-Yung Dollars and our Chinese overlords will be sorely moved. It will be up to Jeff Speakman and his Kempo Warriors to summon the spirit of Lion Yen Kuo and save the day as President Bobby Jindahl applauds from orbiting platform Platform Force One. National Champions!

Clemson conistently plays 2 FBS Power 5 schools in non-conference games (exception 2018) usually tough SEC schools. They have Notre Dame, Auburn, and Texas A&M scheduled in addition to South Carolina (annual rival) in the next several seasons.That’s more than most other ACC or SEC schools do.

We all know how you feel about the SEC however you just don’t have an eye for talent or being able to differentiate between two closely matched teams. And yes they struggled this bowl season, it was only a matter of time, especially when “chance ” is involved. But you make sure to remember this one for a long time and also forget all the other years when they have dominated. I personally believe there is much parity between the confernces. As we saw this year with 2 teams ranked in top 10 at the end of the year. But the SEC did have 4 in top 15 and the BIG12 only had 2 teams in the top 15 yet they still seemed to get much praise this season for the strength of their confernce. Schoup you keep on believing the SEC is weak and overrated. Keep telling yourself that. I am in agreement though that they should all play 9 conference games but you seem to be the one most affected by it. Haha. And when Clemson plays SC and ND in the same season that is much different than playing a weak team at the bottom of your confernce to get the nine confernce games in. And most of the FCS schools teams do play are pretty good programs with legit talent. This isn’t the NFL and we never want it to be. So go ahead and say cupcakes one more time because we all know it’s your favorite word.

Schoup why don’t you check out how the bottom SEC teams did in bowl games. Pretty well I believe. This is just one way the SEC separates itself from other conferences. From top to bottom it’s the toughest. Much more physically tough games each week. As why we see the most draft picks from SEC followed by ACC. Don’t play defense in the PAC12 or BIG12. With out a few turnovers by FSU they would brave been on pace to give up 1500 yards In two games. Two different styles of football. Athletes don’t make great football players.

When will Georgia and Clemson renew their rivalry? It is a shame in this era of dumbing down schedules, that these 2 great rivals aren’t playing each other anymore.