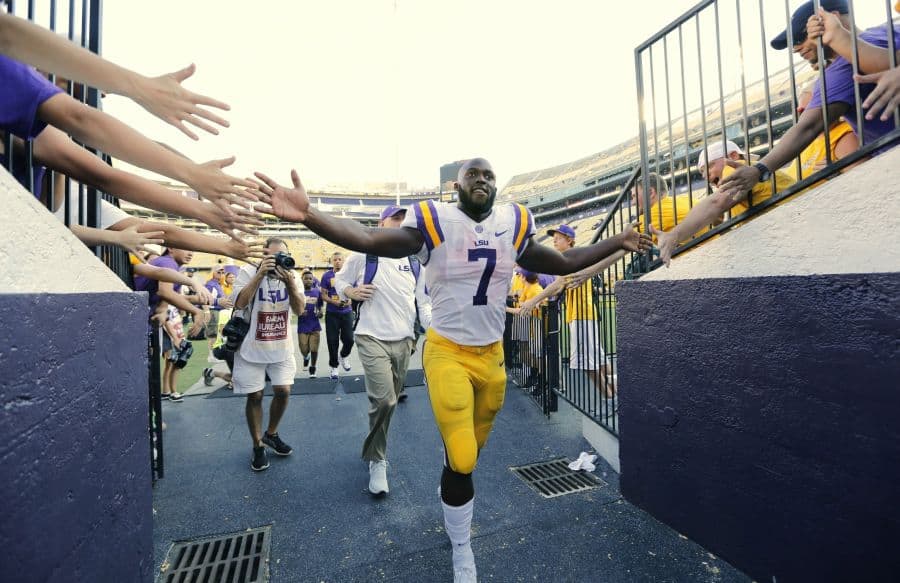 Syracuse gets the unenviable task of trying to slow Leonard Fournette in the Carrier Dome. (Erich Schlegel-USA TODAY Sports)

Well, well, well.  We’re through three weeks here in The Sixer, and as is always the case, nothing (or, very little) is going according to plan.  I’m not the quality prognosticator our buddy Eric Taylor is — as will be clear to all of you in just a bit — which is only to show you that the more we know here at The Sixer, the less we know.

We have two first-time features here this week, so enjoy!

Here are your standings through Week 3:

There’s a long way to go, and no one is out of the competition.  We’re still working (well, I need to get better about it, but we are) with our friends at Stadium Journey to determine a prize for the winner.  Again, this contest is not sponsored by, endorsed by, spoken in the same breath with or whatever else by us here at FBSchedules.

It’s time for a trivia question, and after that, let’s roll.

The Sixer Trivia, Week 4 (answer at the end of the column):  Oregon continued an impressive streak last week of games with a touchdown pass.  How long is that streak, and who was the Ducks’ quarterback in that last game without a touchdown throw?

See Week 4’s ACC Clear Your Schedule for details on this game.

See Week 4’s ACC Clear Your Schedule for details on this game.

Print that, tweet that, whatever:  The records point to an easy Oklahoma State victory.  Jerrod Heard might make us forget about the records before the game ends.

Print that, tweet that, whatever:  TCU looked downright middling against Minnesota, but has dominated otherwise.  Texas Tech has to be looking for revenge.  Should be fun.

Print that, tweet that, whatever:  On one hand, Arizona has won 18 of 23 at home under Rich Rod.  On the other, he’s 0-3 against UCLA.  Can UCLA overcome injuries again?

Print that, tweet that, whatever:  Oregon is deadly at Autzen Stadium, particularly against Utah.  This just might end up being the Utes’ year to reverse that trend.

Trivia answer:  I asked earlier:  Oregon continued an impressive streak last week of games with a touchdown pass.  How long is that streak, and who was the Ducks’ quarterback in that last game without a touchdown throw?

Oregon has thrown a touchdown pass in 71 consecutive games.  The last time the Ducks went without a completed throw in the end zone was the 2010 Rose Bowl, which Oregon lost 26-17 to Ohio State.  Oregon QB Jeremiah Masoli completed 9-of-20 passes for 81 yards and an interception.  This was the last game Masoli would play for Oregon, as he eventually transferred to Ole Miss to finish his collegiate career.

Another quality synopsis of ‘sixer’ games.Thank goodness I am not depending on my pick em process to earn a living,as I would be homeless and hungry,if it were so.
Thanks again for the entertainment.