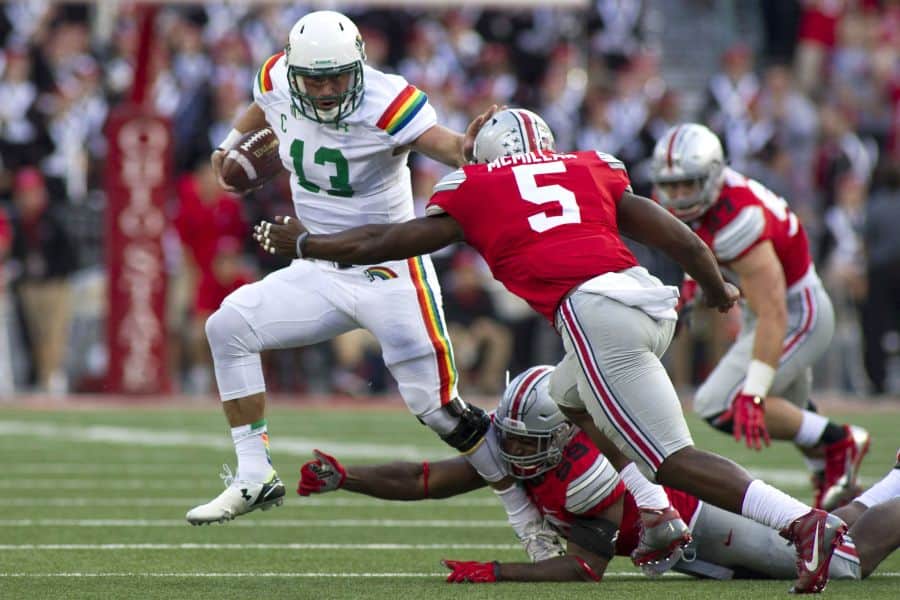 As you are by now aware, we usually start this column off with a recap of what happened in our six games last week. We’ll change up that routine a bit this week.

You see, for those who are unfamiliar with the history of the Sixer from days of radio shows past, we’ve always had what we’ve referred to as Very Special Weeks. Those could include Alumni Week, West Coast Week…or what you’ll see this week.

This week’s action includes six — well, let’s just call them lesser-watched games. As such, we’ll skip the trivia question and the usual pleasantries, and head straight on to the standings.

Tulane program guide: It’s been an incredible — and quick — drop-off for Curtis Johnson’s Green Wave over the last two years. The 2013 Tulane team finished 7-6 and represented Conference USA in the New Orleans Bowl. They moved to the American prior to the 2014 season, and have gone 5-16 (3-11 in conference) since. Their only two wins this season have been a 38-7 decision over FCS-level Maine (3-6) and a 45-31 final against winless UCF. The Green Wave have lost five consecutive games, though admittedly against tough competition (at Temple, Houston, at Navy, at Memphis, UConn).

Army program guide: Black Knights coach Jeff Monken came to West Point after a successful stint at Georgia Southern to run the option-based offense for which Army is famous. The sledding has been a bit tough for Monken, as his teams have won just six times in 21 tries since he took over. Army has defeated Eastern Michigan 58-36 and FCS-level Bucknell (4-5) 21-14.

Print that, tweet that, whatever: Army is nationally a top-ten rushing team. Tulane’s rush defense is ranked 78th. If Army doesn’t have to play from behind, watch out.

UTSA program guide: The Roadrunners have also gone on a somewhat rapid decline over the last three seasons, having gone 7-5 in 2013 and winning their final five games in that season. The club slipped to 4-8 (3-5 in the league) last season. This year, UTSA has lost four consecutive games after their lone win of the season, a 25-6 victory over in-state rival UTEP.

Charlotte program guide: The 49ers have fielded a team for just three seasons. They won 10 of their 22 contests as an FCS independent before joining Conference USA to begin this season. The road has been tough for Brad Lambert’s club this year, notching just two wins and experiencing some turbulence at the quarterback position. Charlotte has lost seven consecutive games after season-opening victories against Georgia State (23-20) and FCS Presbyterian (34-10). Presbyterian has just one win of their own this season.

Print that, tweet that, whatever: If Charlotte can somehow get an early lead, Phillips gives them a clear rushing advantage. If not, it might be a long day for the 49ers.

UMass program guide: The Minutemen took home a 24-14 victory against FIU on October 3 — an FIU team that, by the way, is one win away from being bowl-eligible. That win was the only win UMass has managed to secure this season, however. Mark Whipple’s club enters this contest on a five-game losing streak; however, they have lost three of those five by 10 or fewer points.

Eastern Michigan program guide: The Eagles come into Senior Day having lost their last eight contests. A 48-29 victory at Wyoming in week two was the lone EMU win of the year. The Eagles have won just three of their last 22 contests, though they are a very young team. Eastern graduates just ten seniors.

Georgia State program guide: There are a number of “young” programs on our list this week, and Georgia State is another. The Panthers are in their sixth overall season, and third at the FBS level. GSU has won just three games under head coach Trent Miles in those three FBS seasons, but two have come this year. Georgia State defeated New Mexico State 34-32 and Ball State 31-19.

Texas State program guide: The Bobcats took down Prairie View A&M in their second game of the season, evening their record at 1-1. They have managed just one win since, defeating South Alabama 36-18. Coach Dennis Franchione had his team bowl eligible — despite not playing in a bowl — for the last two seasons, but would need to win out this year to repeat that feat.

Kentucky program guide: After some hope around the rebuilding process in Lexington under Mark Stoops, the grumbles appear to be growing louder with each Kentucky loss. Kentucky started the year 4-1, with a 14-9 home loss to Florida the only blemish. Things have gone south for Stoops’ crew over the last month, though. Kentucky has allowed 151 points in their last four games, scoring just 67. Wildcat fans and administration seem to be committed to shedding the “basketball school” label, but the results are not where they need to be. Making this worse is that Kentucky started 5-1 last year — again, with only a loss to Florida — only to go on to lose their final six.

Vanderbilt program guide: The Commodores are through nine games this season exactly where they were through nine last year, sitting at 3-6. They have, as the Vandy sports information department points out, shown great improvement in a number of areas, though. The Commodores have posted better marks this year over last in 14 combined statistical categories, including a nearly 45-yard increase in total offense, nearly 88 fewer yards allowed per game and 37 more rushing yards per game. Vandy is just 2-3 over their last five contests, though, and has scored greater than 17 points just once, a 47-7 victory over FCS-level Austin Peay.

Print that, tweet that, whatever: Vanderbilt’s main shot in this one is their defense. The defensive unit almost singlehandedly took out Florida in Gainesville.

Fresno State program guide: The Bulldogs appeared in bowls in each of head coach Tim DeRuyter’s first three years in the Valley, but year four has seen its share of setbacks. The formerly high-powered Bulldog offense has seen its offensive output narrowed to under three touchdowns per contest. Fresno State has managed victories against two-win FCS club Abilene Christian to start the season, and a 31-28 win against conference foe UNLV.

Hawai’i program guide: The Rainbow Warriors have already changed coaches, with Norm Chow having departed and former Colorado and NFL offensive lineman Chris Naeole taking the reins on an interim basis. Hawai’i has lost seven consecutive games following a 47-27 victory over FCS foe UC Davis. A season-opening victory against Colorado marks the only other win on the Rainbow Warriors’ balance sheet.

Print that, tweet that, whatever: Fresno State can’t run, and neither can Hawai’i. Of course, neither team seems capable of stopping the other. This is a tough one to predict.