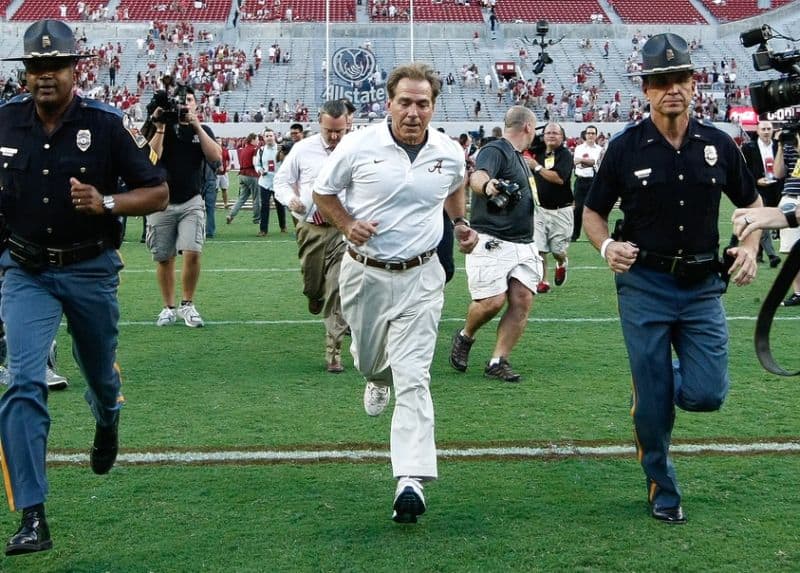 Nick Saban and Alabama host Texas A&M in a game with huge consequences for both teams. (Marvin Gentry-USA TODAY Sports)

Another week, another six-game SEC docket.  We have a few teams with a chance to secure “statement” wins, and still others that may be all but eliminated from the SEC race and bowl consideration.  We’ll peel back this week’s SEC “onion”, but before we do, let’s take a look at some of last week’s key storylines.

Before we roll out our Keyword Search and Info Guide features, here’s this week’s trivia question!

Info guide:  Furman is hardly an unfamiliar foe to the Gamecocks, despite their lack of recent history.  The Paladins are actually 1-1 in their last two games against South Carolina, though that 28-23 Furman victory came in 1982.  In a bit more recent history, Furman was an FCS playoff participant last season, taking the three-way split of the SoCon title.  The Paladins beat in-state foe South Carolina State before finally succumbing to #1 (and eventual national champion) North Dakota State in a 38-7 decision.  The Paladins took highly-ranked Coastal Carolina to overtime last week, before falling 37-31.

Apropos of nearly nothing — especially since this game will be played in Columbia — Furman has one of the most picturesque campuses in the South, or anywhere, for that matter.  If you find yourself on US Highway 276 between Greenville and Travelers Rest, stop by and take a stroll.

Print that, tweet that, whatever:  Furman is athletic, smart and well-coached.  Bruce Fowler’s club almost surely won’t beat USC, but they’ll give a great effort.

Print that, tweet that, whatever:  This game will likely set up a lot of things near the top of the SEC, despite losing a bit of its luster.

Print that, tweet that, whatever:  Arkansas is a truly snakebit team, having played SEC competition quite close.  Tough time to draw Georgia, though.

Print that, tweet that, whatever:  What seemed so promising for Tennessee just two weeks ago is now in serious jeopardy.  It may be next year for the Vols.

Print that, tweet that, whatever:  This game is suddenly huge for both teams.  It’s hard to see Will Muschamp surviving if Florida doesn’t turn it around.

Print that, tweet that, whatever:  Kentucky is off to a tremendous start and could very well win this game.  However, note the game time and location before making that pick.

South Carolina last lost three consecutive games in 2009.  Those losses came at Tennessee, at Arkansas, and at home against Florida.