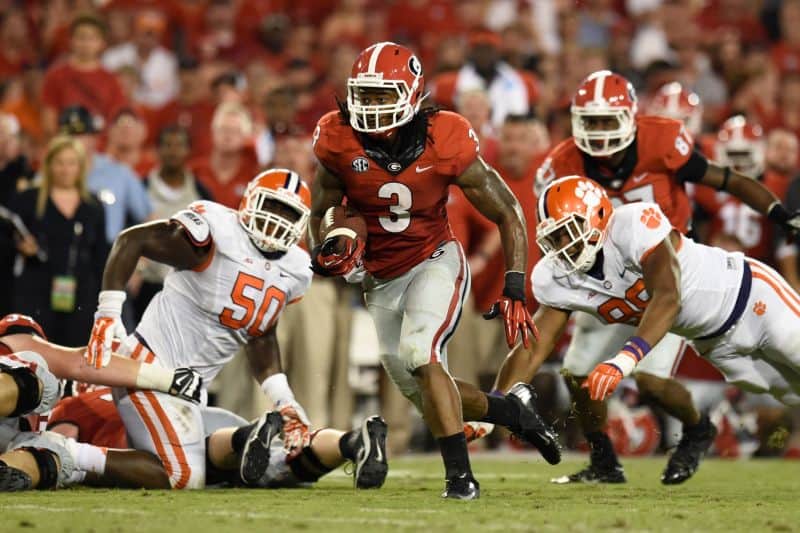 (Author’s note:  This week’s editions of Clear Your Schedule will be slightly condensed.  We’ll make up for it next week.  Promise.)

After a moderately light SEC slate last week, we get 11 conference games on the docket this weekend.  There are two conference games, a couple of in-state contests and a true national test for a conference squad.  We should start to get some more answers about a lot of conference teams after this weekend.  Some teams (sorry, Vanderbilt fans) have some pretty significant questions, and really need a win this week above all else.  We’ll take a look at this week’s action, but before we do, it’s trivia time!

SEC Trivia, Week 3 (answer at the end of the column):  SEC teams own victories over teams ranked in every spot in the top 25 since 2006 except one.  Which ranking spot has the SEC not defeated during that time?

Program guide:  Todd Gurley is the nation’s second-leading rusher.  Let that sink in for just a bit.  The only player with more (Indiana’s Tevin Coleman) has also played just one game, but Gurley’s 198-yard, three-touchdown performance has vaulted him to the top of the rankings for those who — for whatever reason — rank Heisman candidates after one game.  Gurley will need to come up huge again, as Georgia will be again missing wideouts Justin Scott-Wesley and Malcolm Mitchell.  Hutson Mason was an efficient 18-for-26 for 131 yards, and will mainly need to focus on getting the ball to Gurley, with occasional appearances from Michael Bennett, Chris Conley and others.  The Gamecocks bounced back last week in defeating East Carolina, but their defense still shows problems.  South Carolina is 123rd in the nation in total defense after two games, allowing the second-greatest passing total (Bowling Green has allowed more, with 890) in the nation at 832 yards.  South Carolina needs to find a way to pound the Bulldogs with Mike Davis on the ground and keep the ball away from Todd Gurley.  That task may be easier said than done.

Print that, tweet that, whatever:  South Carolina has back-to-back home wins against Georgia, winning three-of-four in the series.  Continuing those streaks will be daunting.

Program guide:  UCF enters this game coming off a bye following their early-season overseas loss to Penn State.  The Knights lost a late decision to the Nittany Lions, just as they did the last time they  met Mizzou in 2012.  The Tigers won that lone contest between the schools 21-16 in Orlando.  For all of the concern about Missouri following the loss of many of their key playmakers on both sides of the ball, they have picked up two convincing victories, and look to run their string of 3-0 starts to seven over the last nine years.

Print that, tweet that, whatever:  The irresistible force (UCF’s 24 rushing yards in game one) meets the immovable object (UCF allowing 57 rushing yards to Penn State).

Program guide:  The tough run continues for the Minutemen, who will spend nearly a month away from “home”.  The school played its home games at Gillette Stadium in Foxborough during the last two seasons, and their current schedule keeps them away from Amherst for another two weeks.  The Minutemen are 2-24 since joining the MAC in 2012, and are already on their second coach in that three-year span.  Vanderbilt hammered UMass in their two previous meetings, but they have concerns of their own after losses to Temple and UMass in Nashville.  Vanderbilt’s multiple-quarterback system has also presented issues, as the Commodores currently rank last in the nation in pass completion percentage (37.3 percent).

Print that, tweet that, whatever:  This should be a pretty solid chance to right the ship for the Commodores.  If they lose here, it’s going to get ugly in Nashville.

Program guide:  This game will be the battle of the uniforms, as Texas Tech plans to wear their all-black throwback uniforms.  Arkansas, meanwhile, will wear their “icy white” road uniforms.  In on-field news, you’ll recall that both of these schools were members of the now-defunct Southwest Conference, so there is quite a bit of history — though not recent — between the programs.  Arkansas comes off a throttling of FBS opponent Nicholls, while the Red Raiders have had close victories over Central Arkansas and UTEP to begin the year.  The Razorbacks are 12th nationally in rushing yards, carrying 69 times for 648 yards and seven scores.  Texas Tech, meanwhile, is ninth nationally in passing yards per game.

Print that, tweet that, whatever:  An interesting clash of styles in Lubbock.  Both teams are in the bottom 15 in time of possession, so Arkansas needs sustained drives.

Program guide:  Louisiana comes into this one off a four-touchdown loss to surprisingly impressive Louisiana Tech.  They have one of the most highly-regarded young coaches in Mark Hudspeth, and a star quarterback in Terrence Broadway.  Broadway’s next touchdown throw will give him sole possession of second place for career touchdown passes at Louisiana with 41, behind long-time Panther Jake Delhomme, who threw 64 while in Lafayette.  The Rebels are rolling, of course, posting huge victories over Boise State and Vanderbilt to begin their season.  Ole Miss is seventh in the country in passing yards per game and tied for eighth in completion percentage, which is going to test Louisiana’s 87th-ranked pass defense.

Print that, tweet that, whatever:  Ole Miss has won 28-of-31 games against Sun Belt teams.  Louisiana’s impressive, but Ole Miss’ high-octane offense presents a huge test.

Program guide:  The Jaguars had a somewhat unusual first-week bye before traveling to MAC member Kent State last week.  South Alabama won that contest 23-13, with running back Jay Jones eclipsing the hundred-yard mark and finding the end zone twice.  The Jags rolled up 415 yards of total offense in the contest.  Mississippi State followed up a 49-0 opening-week win with a 47-34 defeat of UAB last week.  The teams have only played once, with the Bulldogs securing a 30-10 win in Starkville in 2012.  The Bulldogs are a top-20 offense nationally, averaging 533 yards per game.

Print that, tweet that, whatever:  The Jags are only a 13-point underdog in this one, but they’ll need to get quick stops and capitalize on opportunities to win in Mobile.

Program guide:  This is a rough matchup on paper.  Southern Miss was blanked 49-0 in their opener at Mississippi State, followed by a six-point victory over FCS-level Alcorn State last week.  Southern Miss has not defeated a ranked team since beating Houston in 2011.  Alabama flattened Florida Atlantic 41-0 in a weather-shortened contest.  Alabama and Southern Miss have not played since 2005, though Alabama has won 33 of the 41 games between the two.

Print that, tweet that, whatever:  The Crimson Tide are 47-point favorites in this contest.  PAWWWWWWWL!

Program guide:  Many people will immediately make jokes or references to Nick Saban’s comments about ULM, especially during this particular week.  ULM’s place in the national discussion has greatly improved since that unfortunate presser seven years ago, and the Warhawks get another test of their mettle with their Pelican State brethren.  ULM is not an offensive juggernaut (just 55 points through two games), but they only allow ten first downs and 268 yards per game.  Colorado State and NC State transfer Pete Thomas gives the Warhawks a much-needed veteran presence under center after the loss of Kolton Browning.  LSU, meanwhile, has not allowed a score in nearly 20 consecutive offensive possessions by its opponents.  It has also been 14 years since LSU lost to a non-SEC team at home, a streak that runs 41 games.

Print that, tweet that, whatever:  ULM will make this competitive, but trying to beat LSU in Death Valley is a tough hill to climb.

Program guide:  Kentucky will start SEC play undefeated for the first time in five seasons.  It has been 35 years, though, since the Wildcats won in Gainesville.  Kentucky continues to show offensive balance, ranking sixth in the league in total offense, fifth in passing yards and fifth in rushing yards.  They will need every bit of that balance to hang with a Florida club that gained 655 total yards in their season-opener last week.  Quarterback Jeff Driskel clearly benefited from Kurt Roper’s new Florida offense, completing 31-of-45 passes for 248 yards and a score.

Print that, tweet that, whatever:  Kentucky is clearly a different — and better — team, but so is Florida.  Winning in The Swamp is a tall task, but would be huge for UK.

Program guide:  This is the first-ever non-bowl matchup between the Vols and Sooners, and what a time for it to happen.  Butch Jones’ program is riding high on an undefeated start, and the trip to Norman will tell the story about the Volunteer program.  Tennessee is tenth in the conference in rushing yards (eclipsed by Georgia, who has only played one game), though they have experienced a good amount of success through the air.  Quarterback Justin Worley has completed 64.5 percent of his passes, throwing for five scores against just one pick.  This would be a significant win for UT, as it would make them 3-0 to start a year for the first time in ten years.  The Sooners, on the other hand, have started the season 3-0 ten times under Bob Stoops alone.  Quarterback Trevor Knight is efficient in controlling the Sooner offense, and Stoops’ club already has a plus-three turnover margin after just two games.

Print that, tweet that, whatever:  Oklahoma is favored by three touchdowns at home.  Tennessee may reap rewards from playing them close, but a win would be enormous.

Program guide:  We spoke earlier of games that looked rough on paper, and this is another one.  Rice lost their first game to Notre Dame by 31 points, and they have beaten Texas A&M just twice in 19 attempts with the Aggies as a nationally-ranked team.  Their last win in such a situation came 57 years ago in Houston.  The Owls allowed 576 yards to the Irish, registering a minus-two turnover margin.  After A&M’s impressive victory in Columbia to start the season, they hammered Lamar 73-3 in a storm-delayed outcome last week.  Kevin Sumlin’s offense threw for 405 of the 630 yards they accumulated.  Only Texas State and Florida (each team has played just once) have a greater yards per game total than do the Aggies.

Print that, tweet that, whatever:  The Aggies appear to be an absolute juggernaut.   It’s hard to see Rice not getting steamrolled in this one.

Trivia answer:  I asked earlier:  SEC teams own victories over teams ranked in every spot in the top 25 since 2006 except one.  Which ranking spot has the SEC not defeated during that time?

The SEC has not defeated any teams ranked sixth in the top 25 since 2006.  Conference teams own five victories over teams ranked ninth during that period.