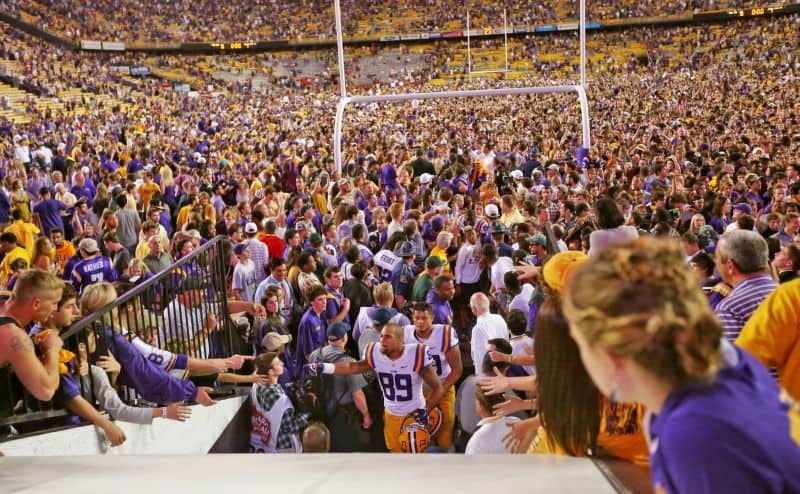 Here at Clear Your Schedule, we try to keep this a light space, where we can break down the key storylines to a particular week’s spin around the sun, but still have fun doing so.

Before we proceed with this week’s edition, though, I urge you to read this.  Let’s be honest, friends.  Whether you’re a Georgia fan, an Auburn fan or whichever team holds your allegiance, we all have this story somewhere within us.  We don’t just figure sports out on our own.  They all start with a father, a brother, a mother, a sister, a friend or someone we hold dear who shows us what it means to truly love something.  This is as good of a love story as it gets.

Gosh, it’s getting a little dusty in here.  Pardon me while I take care of that.

What you just read is our Biggest Thing from last week.  There’s no other storyline we could invent that would top it.  In the interest of skipping the other Big Things from last week, I also share this.

Laquon Treadwell’s injury broke the heart of seven-year-old Tanner Harris.  The entire story is enough to remind me of so many things.  Though Tanner’s response to the injury will tug at your heart strings, the story of his bonding with his dad is one of the coolest things you’ll read this year.

Even better, the letter eventually made its way to Treadwell via Twitter.

If you have kids, hug them and tell them you love them.  If you have someone you love who fostered your love for sport — like my dad did for me — thank them.

Let’s just drop the mic and move on to trivia.

SEC Trivia, Week 11 (answer at the end of the column):  One of the two FCS teams playing SEC competition this week has played in a bowl game.  Which team played in a bowl, and in which bowl did they play?

Note:  As there are multiple SEC squads playing FCS teams this week, we’ll again return the Info Button feature to introduce you to those teams.  The other games get the typical Keyword Search treatment.

Info button:  The Blue Hose are enjoying a reasonably solid season, staying above .500 to this point in the season after never having a season better than 4-7 in their six years of FCS play.  Two of coach Harold Nichols’ club’s losses have come to FBS competition (66-3 at Northern Illinois and 42-0 at NC State), while their other two have come to the two clubs ahead of them in the Big South standings (Coastal Carolina and Liberty).  Presbyterian has never defeated an FBS team.  PC’s enrollment is one of the smallest in Division I football, as just 1,300 students are enrolled at the Clinton, South Carolina school.

Print that, tweet that, whatever:  Despite Treadwell’s absence, this is a tough out for the Blue Hose.  This is, however, a program on the rise.

Print that, tweet that, whatever:  This game will be close, but look for Kentucky’s recent tailspin to continue against an angry Georgia team.

Print that, tweet that, whatever:  The stars are aligned for Auburn to exact some revenge on the Aggies.  Watch Kyle Allen in his first SEC road start.

Info button:  Jason Simpson’s Skyhawks are a high-octane crew, averaging greater than 30 points per game.  Their only FBS game this season opened the year, a 59-14 loss at Kentucky on August 30.  Martin also owns one of the more unusual statistics in FCS football, having converted 50 percent (10-for-20) of their fourth-down attempts this season.  Adding to these numbers — or perhaps explaining some of them — is the fact that Martin averages just shy of 430 yards per game on offense.  The Skyhawks do have a victory over an FBS team in their pocket, having beaten Memphis 20-17 two years ago.  There is, obviously, quite a difference in 2012 Memphis and 2014 Mississippi State.

Print that, tweet that, whatever:  Simpson played at Mississippi State for two years, but don’t expect this to be a happy homecoming.

Print that, tweet that, whatever:  Vandy looked like the Vandy of “old” last week, but struggles aside, Florida is not Old Dominion.

Print that, tweet that, whatever:  ‘Bama is — pardon the pun — on a roll, while Death Valley on a Saturday night is a tough place to win.  This one should be legendary.

Trivia answer:  I asked earlier:  One of the two FCS teams playing SEC competition this week has played in a bowl game.  Which team played in a bowl, and in which bowl did they play?

Presbyterian participated in the 1960 Tangerine Bowl.  Middle Tennessee (I promise I didn’t use this question to get them into the column) defeated the Blue Hose 21-12.

I do not see an upset here,unless you think LSU will beat Bama.I say Roll Tide.Great job,as always Brian.

The Tide will roll on as usual. I’m not saying it wont be a nail biter with our team on the road in LSU back yard, but we will win this. RTR