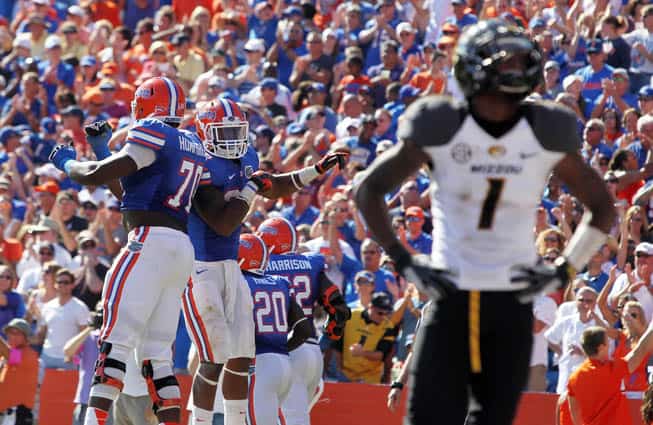 The SEC East sure took some interesting turns in week seven, loyal readers. Missouri defeated an admittedly weakened Georgia club between the hedges, Florida fell in Baton Rouge while losing their star running back and South Carolina thumped Arkansas. The Tigers are now in first in the division, but also lost one of their stars, with James Franklin now out for an extended period.

South Carolina gets their shot at Missouri — and a division title nobody would have thought possible weeks earlier — next week, but there are some games with interesting consequences lined up for this weekend. We’ll take you to meaningful conference tilts in Columbia, College Station and more, but first, here’s a trivia question!

SEC Trivia, Week 8 (answer at the end of the column): Five SEC schools have average crowds at or greater than their stadium’s capacity this season. Who are those five schools?

Program guide: Despite the Franklin injury we’ve already referenced, Missouri finds themselves in a place few outside of Columbia could have expected at this point in the season: first place in the SEC East. The job of maintaining that spot now falls to Maty Mauk, who gets the unenviable task of facing the conference’s top defense in his first starting assignment. Luckily for Mauk, he has a number of offensive weapons at his disposal, including the league’s second-best rushing offense and three of the top 20 receivers (L’Damian Washington, Dorial Green-Beckham and Marcus Lucas) in the league.

The Tigers have experienced their own share of defensive concerns this year, allowing just over 419 yards per game. They have also allowed the most passing yards in the league (1759). Missouri has allowed greater than 400 yards of offense in each of their last four contests, including 454 to Georgia last week.

Gary Pinkel’s club gets a struggling Florida offense this week, further decimated by the loss of Jones to a season-ending injury. The Gators are next-to-last in the SEC in total offense, averaging just under 368 yards per game. Those struggles came to a head last week in the loss to LSU, with Florida gaining just 240 yards against LSU, while converting just 6-of-17 third down opportunities. Quarterback Tyler Murphy — himself under center because of a season-ending injury — completed 15-of-27 passes for 115 yards, being sacked four times. Senior Mack Brown looks to take over the lion’s share of the carries in Jones’ absence.

Florida’s defense will look to carry the team, as it has all year. The league’s number one defense also ranks third nationally in yards per game allowed (235.3), posing quite the challenge for Mizzou. This top-five unit has locked down opponents all season, and how they respond to a quarterback with very little film available will be an interesting component to watch in this game. The one place Florida’s defensive domination does not continue is in turnover margin. Mizzou ranks fourth in the nation in turnover margin (1.5), while Florida is 49th at just 0.3 per game. Florida needs to find ways to win the turnover and time of possession battles to keep their hopes of heading to Atlanta alive.

Trivia answer: I asked earlier: Five SEC schools have average crowds at or greater than their stadium’s capacity this season. Who are those five schools?

There are some most interesting games this weekend,as there usually is this time of the year.This part of the season is when championship games firm up,bowl decisions are starting to come together,and national titles are coming together.This conference is the ‘rose garden’ of college football,and looks to continue in that vein.
As usual,the breakdowns of the games are well researched and contain the key points to winning.The ‘headliner’ game goes a long way towards setting things up for the conference championships and beyond.