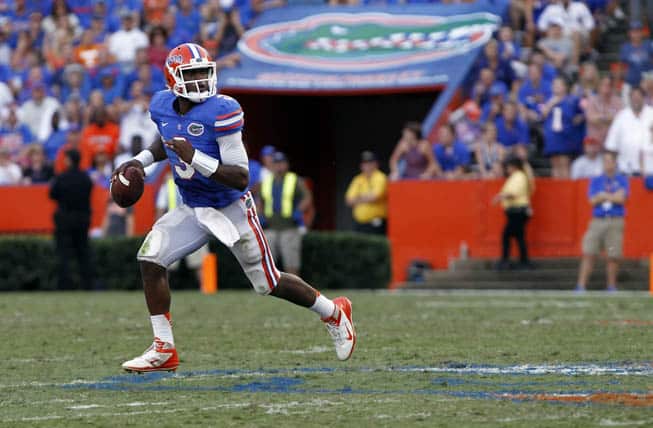 Week 5 in the SEC taught us a number of things. We learned that Bo Wallace and Ole Miss really couldn’t put points on Alabama. We also learned that Tennessee has quite a few problems on both sides of the ball, manifesting themselves in a 31-24 victory finalized only by a Volunteer interception in the end zone with less than two minutes remaining. Despite there being a lot of football remaining in the season, we finally learned that a Georgia-Alabama rematch in Atlanta to close the season is sporting a more and more likely look.

Week 6 seems a bit early for do-or-die matchups, but this is the SEC. Gainesville, Starkville, Auburn and Nashville all host games with gigantic stakes for one or both teams. In a week filled with really good games, we’ll look to find a great game. Until we do, though, here’s a trivia question!

SEC Trivia, Week 6 (answer at the end of the column): Georgia quarterback Aaron Murray is just 100 yards away from breaking the SEC record for career passing yards. Which passer currently holds that record?

Program guide: Arkansas has lost two straight, and their run of scheduling woe continues. The Razorbacks visit the Swamp this week, followed by games with South Carolina, at Alabama and Auburn before finally getting a bye and a home game with Mississippi State. Texas A&M compiled 523 yards of total offense against the Razorbacks last week, with Johnny Manziel accounting for 320 of those yards (261 passing, 59 rushing). The bigger problem for Arkansas’ defense was their inability to get off the field on third down (7-of-13 third down conversions allowed), which allowed for extended drives. This absolutely cannot be the case for Bret Bielema’s club this week if they want to leave the Swamp with a victory.

The real irresistible force/immovable object argument reveals itself in the battle of Arkansas’ running game against Florida’s rushing defense. Freshman Arkansas running back Alex Collins ranks second in the SEC in rushing, averaging 119.4 yards per game. He carried 14 times for 116 yards and a score against A&M last week. He faces a Florida defense that ranks first in the conference in rushing yards per game — by 50 yards a game — and allows just 53.5 yards per game. Considering that quarterback Brandon Allen completed just 47.2 percent of his passes last week (53.8 percent on the season), it could be a long day for the Razorbacks if Collins can’t get untracked.

Arkansas’ rush defense will also get quite the workout on Saturday. Florida has rushed for fewer than 200 yards in a game just once this year, when they ran for just 122 yards in a loss to Miami. Matt Jones carried for 176 yards last week against Kentucky, part of a 246-yard rushing effort by the Gators. The Hogs rank fifth in the SEC in rushing yards allowed, giving up 126.4 yards per game.

Gator quarterback Tyler Murphy has settled into his position quite nicely after taking over for Jeff Driskel. Murphy has thrown just nine incompletions in two games, with three of those coming last week against Kentucky. Murphy’s 15-of-18 performance for 156 yards offered the type of game management many Gator fans hoped for from Driskel. Arkansas averages 210 passing yards allowed per game, which ranks sixth in the conference. Opposing quarterbacks average a 123.71 rating against Arkansas, and if Murphy can edge closer to his 160-plus standard than that number, the Gators’ chances should be quite good.

Program guide: The Tigers take the field at Jordan-Hare after a loss to LSU and a bye week. Auburn gained just 104 yards in the first half in Death Valley, though they rebounded nicely in the second half to finish with 437 yards of offense against a tough LSU defense. That 437-yard total was the second-lowest of the year for the Tigers, eclipsing just week one’s 394 yards against Washington State. Ole Miss ranks sixth in the conference in total defense, allowing 358 yards per game. Auburn’s offensive improvements need to continue in order to keep the Rebels at bay on the plains.

Though Bo Wallace couldn’t deliver on his hypothesis that his offense could put up points against Alabama, the chances are much better that he and his Rebels will find success against their second consecutive Alabama-based opponent. Auburn ranks thirteenth in total defense, allowing 439.5 yards per game. Gus Malzahn’s team does not fare much better in rushing or passing defense, as they rate twelfth in both categories. Ole Miss tallied just 205 yards against Alabama last week, though, and down weeks from Bo Wallace (17-for-31, 159 yards) and Jeff Scott (8 carries, 28 yards) would not figure to continue. Both teams allow approximately 40 percent of opposing third down attempts to be converted, so the defense that stays off the field the longest will loom large late in this game.

Fellow Bulldog David Greene (2001-04) is the career SEC leader in passing yardage, throwing for 11,528 yards during his career in Athens. Murray currently stands at 11,429 yards.

Although there are no ‘powerhouse’ games this week in conference,I believe I may have been inclined to Have Ole Miss and Auburn as the feature game.The winner of that game keeps themselves in the proverbial hunt for the conference,and a possible bowl bid of consequence.I do not see Arkansas having a shot to beat Fla.in the Swamp.
As usual,your things to watch,and synopsis of the games is outstanding.

That was a really close decision; however, Florida still has a shot to win the East. That was the tipping factor. This really was a razor-thin line, though.