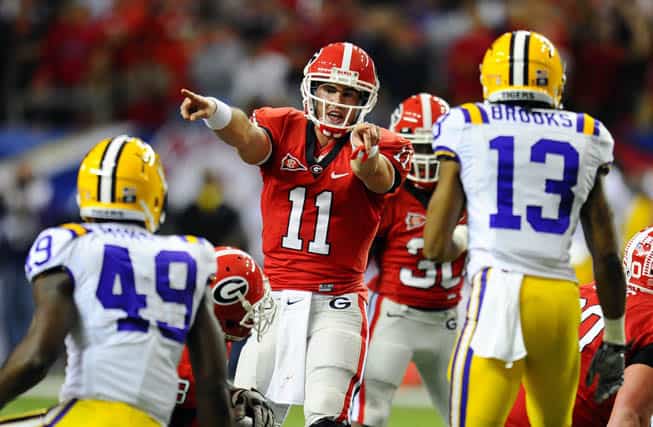 Those who follow SEC football have been anxiously awaiting the “signature” games for which the conference is famous. We’ve already had Georgia-South Carolina and Alabama-Texas A&M, and we get a number of marquee matchups from the conference this week. Whether your eyes are on Athens, Tuscaloosa, Orlando, Fayetteville or any other southern outpost, the action is truly starting to heat up around the conference. We’ll take you on a tour of all these games, but first, let’s ask you a trivia question!

SEC trivia, Week 5 (answer at the end of the column): The two longest games (in terms of overtimes) in conference history each took seven overtimes to play. Which teams participated in those two games, and who won each?

Program guide: It seems as though we have utilized this space ad infinitum to talk about the quarterbacks for both teams this year, so let’s take a different direction in previewing this game. Both teams have a ferocious rushing attack to go along with their elite passers. LSU has three running backs in the top 40 in total offense in the conference. Jeremy Hill ranks 18th, Terrence Magee 33rd and Alfred Blue 39th. Georgia is a middle-of-the-pack team against the run; they rank eighth in the conference, allowing 143.3 yards per game. Hill particularly manhandled Auburn last week, carrying the ball 25 times for 184 yards and three scores.

Be not fooled — Georgia has their own qualified rushing attack, as well. Todd Gurley rushed 21 times for 91 yards and one of the Bulldogs’ three rushing touchdowns against a surprisingly effective North Texas club. Aaron Murray, of course, had quite the game on his own, throwing for 408 yards and three scores. Gurley leads the conference in rushing, toting the “rock” to the tune of 126 yards per game.

LSU has not trailed for even a second in the 2013 season. LSU also has not played a true road game all season, despite playing a neutral-site game against TCU in Arlington to start the season. One of these two factoids will change when toe meets leather to begin the game, but Georgia needs to change the other in a hurry. An early score (or two) would go a long way toward neutralizing LSU’s powerful ground game.

Georgia has not defeated two top-ten teams in the same season in six years. With one win already under their belt against then-number six South Carolina, a win here would make that streak go by the boards. Georgia can take one more gigantic step toward Atlanta and another try for the SEC title with a victory in this game, while the Gamecocks will certainly don their purple and gold while watching this affair.

With those simple words, Bo Wallace earned a bold, underlined and brightly-colored spot on Alabama’s bulletin board. It likely seems folly to say this about the top-ranked team in the country, but keep in mind that Alabama’s defense is allowing 373 yards per game. Sure, most of that yardage was tallied by Johnny Manziel and the Texas A&M Aggies, but the Rebels are certainly a stout offensive unit.

Wallace also said that he felt the Rebs had better receivers than Texas A&M. The numbers don’t bear this out, of course, but this is primarily so due to Mike Evans’ success for the Aggies. Wallace does have three targets in the conference’s top 21 in yards per game, though, as Evan Engram (14th), Donte Moncrief (15th) and freshman Laquon Treadwell (21st) all offer plenty of firepower and separation ability, but running back Jeff Scott (110 yards per game) will also need a lot of attention from a Tide rush defense that allows 123 yards per game.

The confidence by Wallace that his team could put points on the board likely comes from seeing what Texas A&M did, instead of reading the numbers posted by Alabama’s defense under Nick Saban. Colorado State became the 42nd team in the Saban era held to fewer than ten points by the Tide in last week’s defeat. Of those 42 low-scoring affairs, ten resulted in shutouts. Saban’s defense ranks fourth in the SEC, allowing 19.3 points per game, a number again slightly inflated by A&M’s outburst in College Station.

Ole Miss is in the middle of a torturous stretch that includes consecutive games at Texas, Alabama and Auburn. If they somehow manage to escape that stretch, they get Texas A&M and LSU in Oxford. Hugh Freeze has a chance to add yet another accomplishment that nobody would have expected at this course of his young Rebel coaching career by beating the Tide, but a “signature” win is by no means a given. Ole Miss has defeated Alabama just nine times in program history, and has not managed to deliver a victory over the Tide in ten years.

Program guide: The Gamecocks got a week off last week after defeating Vanderbilt in Columbia. The bye could not have come at a better time for Steve Spurrier’s charges, as their first three games included two conference foes and a border battle. South Carolina appeared to briefly run out of gas in the fourth quarter of the Vanderbilt game, allowing two touchdowns in 13 seconds. The scoring ended after the second touchdown, though, and South Carolina moved to 2-1.

After seeing Bryn Renner, Aaron Murray and Austyn Carta-Samuels in the first three games, another adept passer awaits the Gamecocks in UCF junior Blake Bortles. Bortles has completed 50 of his first 70 passes on the season, throwing for 816 yards and seven touchdowns against just one interception to key his club’s undefeated start. As beneficial as the bye week was for the Gamecocks, Bortles and Central Florida also enjoyed a bye last week after defeating Penn State 34-31.

The Golden Knights have never before played on network television, and one has to wonder if this stage will be too big for them. Bortles is seen by many as a darkhorse Heisman candidate, and this game will likely make or break his campaign. The team is off to its best start in the school’s time in the FBS, and a win over South Carolina would elevate the program to new heights.

South Carolina, meanwhile, will look to lower UCF’s standing against the run. The Golden Knights rank 34th in the FBS in run defense, allowing just 119.3 yards per game on the ground. The Gamecocks rushed for 220 yards against Vanderbilt, with three ball carriers in double digits in rushing attempts. This number was right in line with South Carolina’s season rushing average of just under 225 yards per game.

Program guide: The Southwest Conference no longer exists, and Arkansas left the conference before it folded, but these two former SWC members will tee it up this weekend in Fayetteville for the first time since 1990. The Aggies hammered the Razorbacks 58-10 in their first SEC matchup in 2012, but things are a bit different this time around. Former Wisconsin coach Bret Bielema has taken over the throne for the Hogs, and the team has quickly rebounded from its lost 2012 year.

Texas A&M has continued piling up offensive numbers in 2013 at the same pace at which they finished 2012. Quarterback Johnny Manziel enjoys a healthy lead in total offense among all SEC players, accounting for 370.8 yards per game. Johnny Football gets a look at Arkansas’ suddenly stout defense this week, though. Arkansas ranks second in the conference in total defense, allowing 289.8 yards per game.

The Aggies are dead last in the conference in total defense, however, and this may end up being yet another shootout. Quarterback Brandon Allen has battled injury, leading the Razorbacks to turn to backup A.J. Derby. Derby completed just 14-of-26 attempts for 137 yards and a touchdown in a 28-24 loss to Rutgers last week, while Allen has completed 26-of-44 passes for 388 yards and five scores against just one pick on the season. Whomever plays will have the primary assignment of getting the ball to freshman running back Alex Collins. Collins is the conference’s second-leading rusher (120.3 yards per game), despite carrying just 16 times for 63 yards against Rutgers.

Manziel and Aggie running back Ben Malena both rush for about 65 yards per game, and Arkansas allows just 92.5 yards per game. This constant defensive pressure may lead Manziel to attempt to throw more, where he will look for star receiver Mike Evans. The possibility of conquering Arkansas through the air is considerably greater, though the Razorbacks have allowed greater than 200 passing yards just once, in that loss to Rutgers. Gary Nova is more of a pocket passer than Manziel, so the pressure is on Bielema’s defenders to keep contain and not lose coverage when the pocket rolls and Manziel looks to create down the field.

Trivia answer: I asked earlier: The two longest games (in terms of overtimes) in conference history each took seven overtimes to play. Which teams participated in those two games, and who won each?

Arkansas defeated Ole Miss 58-56 on November 3, 2001. Eli Manning’s two-point attempt was broken up in the end zone, giving the Razorbacks the victory. Arkansas also played a seven-overtime game against Kentucky in Lexington on November 1, 2003, winning 71-63. Decori Birmingham had the eventual game-winning touchdown run. The teams were tied at 24 after regulation, with Arkansas outscoring the Wildcats 47-39 in extra time.

The ‘signature’ game,as referenced,is going to be a huge one.LSU-Ga.will be a war,and you analyzed it perfectly by way of getting the running game established,and getting an early lead and making your opponent get out of their comfort zone.Look for this game and the Bama-Miss.game to both be headliners and hard fought.
We may see a glimpse of the championship game after this weekend’s games.