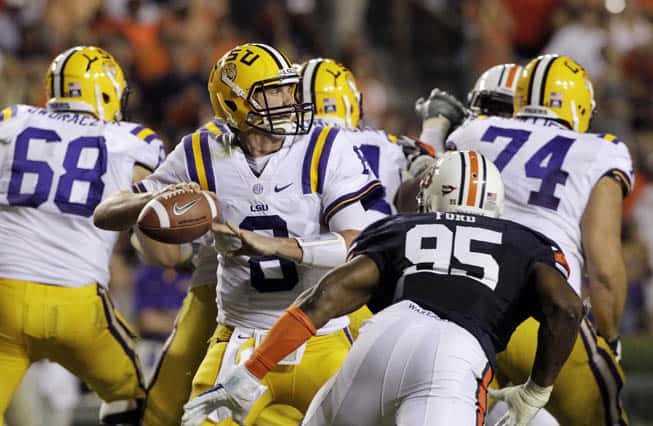 Here we are in Week 4 of the 2013 SEC schedule, and the latest Game of the Century is behind us. Alabama withstood Johnny Manziel and the 12th Man to escape College Station with a 49-42 victory and an inside track to yet another BCS National Championship game appearance. The Tide have also admirably dodged yet another rumored Nick Saban departure this week, one of several we will assuredly hear in the coming months.

The Aggies look to bounce back against an in-state opponent, which is one of the nine games on the conference slate. Get ready to go on a trip from Massachusetts to Texas and everywhere in between — but first, here’s our weekly trivia question!

Program guide: The battle of the Tigers unfolds Saturday night in Death Valley, and what a difference three games makes. Gus Malzahn has returned to the plains, and the Auburn offense has returned with him. Malzahn’s team averages just over 440 yards per game through the first three contests of the season, and quarterback Nick Marshall (43-70, 585 yards, four touchdowns, two interceptions; 27 carries, 102 yards) is the catalyst behind this offensive resurgence. Junior running backs Corey Grant, Tre Mason and Cameron Artis-Payne have also put up huge numbers, combining for 602 yards and five touchdowns. Auburn is also the only team in the conference to convert 100 percent of its red zone opportunities, joining just nine others in the FBS to have done so.

Auburn’s defense is still experiencing its share of concerns (92nd in total defense, 105th in passing defense). Mississippi State exposed some of those concerns last week, mostly from the quarterback spot. Dak Prescott completed 15-of-28 passes for 213 yards, adding 22 carries for 113 yards and two touchdowns. Though LSU will not present the same running quarterback issues with Zach Mettenberger (6 carries, 6 yards), the Tigers are maturing as a passing offense (269.3 yards per game). If Auburn plans to play closer to the line to stop LSU’s rushing attack (5.51 yards per carry), a lot of pressure will be on the corners to control the passing game.

LSU drilled Kent State last weekend, with Mettenberger (13-for-18, 264 yards, three touchdowns) turning in another efficient performance. The Tiger rushing attack carried the day, though. Running backs Jeremy Hill, Terrence Magee and Alfred Blue combined for 30 carries, 281 yards and three touchdowns. They will look to carry an LSU team that has not lost an SEC opener at home since 2006.

The LSU defense will look to continue its stingy ways in this contest. The Tigers are tenth nationally in total defense (267.7 yards per game), ranking behind only Florida and Arkansas among SEC clubs. John Chavis’ defense also succeeds in pass defense (15th in the FBS) and run defense (24th). LSU and Auburn also share great numbers on special teams, with Auburn ranking third in the nation in kickoff returns, with LSU ranked thirteenth. One of those LSU kickoff returns came from Odell Beckham Jr. in LSU’s 37-27 win over TCU in the season-opener, a 75-yarder that helped to counter a late TCU score. Special teams could play a large role in this game, and with both teams having success in this area, keep an eye on kick returns throughout the game.

Program guide: Missouri came through a tough 5-7 season last year to start this year 2-0, though there are still questions about where Missouri will go the rest of this season. Mizzou owns early-season victories over FCS-level Murray State and Toledo, and the Tigers get their first — and somewhat unexpected — test against the Hoosiers. Quarterback James Franklin is healthy again, and has gotten off to a tremendous start (42-for-63, 530 yards, four touchdowns, one interception; 23 carries, 121 yards). Containing Franklin, running backs Henry Josey and Russell Hansbrough and star receiver Dorial Green-Beckham will be a large task for Indiana’s 77th-ranked defense.

Indiana is 2-1 primarily because of their success on offense. The Hoosiers rank eighth nationally in total offense, running up 571.3 yards per game. Quarterback Nate Sudfeld is shredding opposing defenses to the tune of a 70.6 percent completion rate, completing 60-of-85 passes for 917 yards, throwing for ten scores against just two interceptions. Running back Tevin Coleman is having quite the start to his season, as well, rushing 41 times for 332 yards and five touchdowns. Indiana ranks tenth in the nation in passing yards per attempt (10.3). All roads appear to lead to a high-scoring affair in Bloomington, making this one of the more fun games of the weekend.

Another really quality view of this week’s SEC games.The headliner is obvious with the Tigers(both teams),being the marquee game.There are certain contests during the year which indicate who may be playing in the championship game.This is one of those.