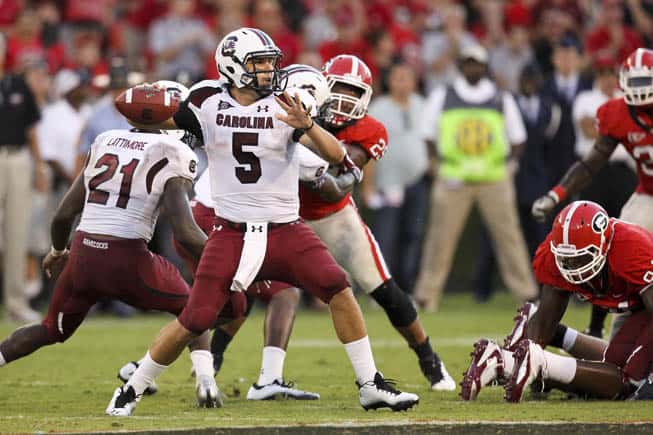 It’s only week two in the Southeastern Conference, and we’ve already had a wacky conference contest, a lightning delay, a quarterback benched for taunting and an upset. Saying this is par for the course in the SEC is probably a bit much, but the premier league in college football will always have a little extra juice each week.

That juice is in full effect in week two, with a match-up of preseason top-ten teams between the hedges headlining the schedule. We will also unveil the new Keyword Search feature this week, giving you some of the key storylines to keep an eye on throughout the league slate. Eleven games are on tap for the weekend (along with the Florida-Miami game, chronicled in the ACC version of Clear Your Schedule), and we’ll take a look at all of them right after this trivia question!

SEC trivia, week 2 (answer at the end of the column): Two Ohio Valley Conference teams travel to face SEC opponents this week. Who was the last SEC squad to be defeated by an OVC team?

Program guide: The Gamecocks kicked off their season last Thursday, and the final almost seemed inconsequential in comparison to the main storyline. That storyline didn’t involve the first passes thrown by both Connor Shaw and Dylan Thompson for the 2013 season going for touchdowns, Mike Davis carrying for 115 yards and a score or South Carolina holding Tar Heel rushers to less than three yards a carry. The focus, instead, was on Jadeveon Clowney’s conditioning, or apparent lack thereof.

Clowney managed just three solo tackles and three quarterback hurries against North Carolina, and looked gassed through most of the game. This unfortunately takes the attention away from what Clowney’s counterparts on the defensive line did to back him up, as Kelcy Quarles, Gerald Dixon, Jr., Darius English, Kelsey Griffin and Chaz Sutton all logged three or more tackles. Quarles and Dixon also recorded a sack each. The true focus for the Gamecocks this week needs to be constant pressure on Aaron Murray, as they held a similar quarterback (in style, if not talent) in Bryn Renner to just 4.5 yards per attempt. More pressure in the Georgia backfield will not allow time for plays to develop downfield, where Carolina is more vulnerable.

Georgia is left without one of its key weapons to make those plays, as receiver Malcolm Mitchell is out for the year after suffering an ACL injury against Clemson last week. This is a devastating blow, to be sure, but the injury opens the door for targets like Chris Conley and Michael Bennett to make increased contributions in Mike Bobo’s offense. The two combined to snare eight catches for 132 yards last week, and one would imagine these looks will continue to increase. Todd Gurley also had his usual tremendous outing last week, rumbling for 154 yards and a score, but a new option emerged in fullback Quayvon Hicks. Hicks carried just three times for 38 yards, but logged a touchdown and had a 37-yard drive-saving run. Hicks’ blocking also helped clear space for Gurley to run.

The Bulldogs’ defense gets another crack at an athletic quarterback this week, as Connor Shaw will be under center for Steve Spurrier. The combination of Shaw, Davis and Brandon Wilds will need to be contained by a Bulldog defense that allowed 4.28 yards per carry last week to Boyd, Roderick McDowell and the Clemson rushing attack. Georgia’s defense needs to get up the field just like South Carolina, as the Bulldogs managed just three hurries and three pass deflections on Tajh Boyd last week.

With the talent level between these two clubs and the obvious sense of urgency on Georgia’s side, this has the potential to be one of the top five games of the regular season, in any conference.

Trivia answer: I asked earlier: Two Ohio Valley Conference teams travel to face SEC opponents this week. Who was the last SEC squad to be defeated by an OVC team?

I’ve been seething over the things people have been saying about Clowney’s performance. The poor guy was sick all week. Bet they got him good and angry. He’s going to lay the hurt tomorrow!

For most of the conference teams,today’s games will be like throwing steak in the lions cage.SC vs.Ga.is clearly the game,just as GA.was involved in the key game last week.While I certainly hope that Clowney and company will be a hungry group today,I still respect that Georgia offense.
As usual,your analysis of the games and key contributors is right on target.Thanks a lot for the concise recaps of what to expect,and what to look for.