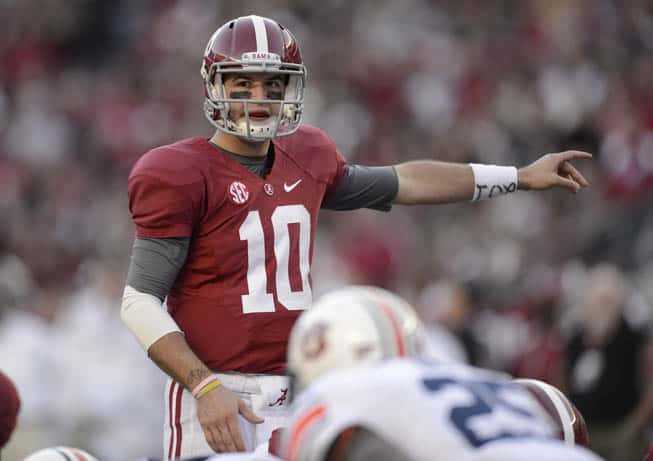 (Author’s note: Since the Georgia-Georgia Tech game is played in an ACC stadium, the preview of that game can be found in the ACC edition of Clear Your Schedule.)

Well, ladies and gentlemen, we’ve arrived. The season that seemed to have just started yesterday has reached its end, and what an end we get to witness. The Iron Bowl awaits on Saturday, and the Missouri-Texas A&M game determines the other team in Atlanta. The Egg Bowl could add another bowl participant from the conference. Clemson and South Carolina meet with bragging rights in the Palmetto State on the line. If you’re an SEC fan — and honestly, why would you be reading this piece unless you were? — there is little reason to move from your couch all weekend…except for the pesky “family” thing.

SEC Trivia, Week 14 (answer at the end of the column): The 2000 Iron Bowl was played in Tuscaloosa for the first time in the series since 1901. What was the final of that game, and who were the coaches?

The 78th Iron Bowl will be played in Jordan-Hare Stadium for the 12th time, and the stakes have rarely been bigger. Auburn’s Gus Malzahn has already led his team to the largest single-season turnaround in SEC history, and he is aiming to cap that turnaround with a Western Division title.

Though Alabama has the number one ranking, Auburn has enjoyed a great deal of offensive success. The Tigers outgain the Tide by 55 yards per game, with Auburn averaging just shy of 500 yards per game. The teams are relatively close in points per game, with Alabama just .7 points (39.7-39.0) better than Auburn. Where the Tigers enjoy the real edge is in rushing offense, carrying for 3,523 yards this season (320.27 yards per game). No other SEC team has gained greater than Missouri’s 2,618 yards on the ground.

The cliche of the irresistible force meeting the immovable object will be in play on the Plains on Saturday, as Alabama allows just 91.27 rushing yards per game. The Tide have allowed greater than 100 yards rushing in just four games, and just 189 combined rushing yards in their last three games. SEC foes have carried for just 98.9 yards per game against Kirby Smart’s defense.

Auburn is no slouch on defense, to be sure. Though two of the conference’s more high-powered offenses (Texas A&M and Georgia) scorched the Tiger pass defense for 884 passing yards, they have allowed 354 yards or fewer in four of their last six games, with the Aggies and Bulldogs composing the other two. They will obviously need to be as stingy as possible against a Tide offense that averages 444.7 yards per game on the season and 490.9 in conference games. Alabama also ranks 18th in time of possession in the FBS, keeping the ball for almost 32-and-one-half minutes per game.

This column is clearly not a space in which to offer gambling advice, but it bears mention that Alabama was favored by 24 points in this game at the Golden Nugget sportsbook in Las Vegas in June. That line has now moved in Auburn’s favor by two touchdowns. Auburn needs to find a way to jump out to an early lead in this game and let their dominating running game take over. The Tigers are ranked eleventh in the conference in passing (179.6 yards per game), and it is clearly to Auburn’s advantage if they can run instead of throw. It seems as though the SEC has a “game of the decade” multiple times each year, and this game clearly lines up to fit that bill.

Trivia answer: I asked earlier: The 2000 Iron Bowl was played in Tuscaloosa for the first time in the series since 1901. What was the final of that game, and who were the coaches?

Auburn, led by coach Tommy Tuberville, defeated Alabama and coach Mike DuBose 9-0 on November 18, 2000. DuBose was fired after the season, in which the Tide finished 3-8 (3-5 in the SEC).

Since it’s Thanksgiving week — and the end of the regular season — let me thank all of you who continue to visit this space each week. It’s a pleasure to talk SEC football with all of you, and I’ll be back for the bowls and the 2014 season to keep doing so. Thank you all, as well, for continuing to visit us here at FBSchedules. We appreciate each and every one of you. My best to you and yours this Thanksgiving, and I’ll see you all for the SEC Championship Game and the bowl games!

Some really good games this weekend,with Ala.-Auburn being at the top.This game could and will feature a team in the NCAA Championship game.Of course,there are some other major games of significance on tap for BCS bowl games.It is a great weekend to be a football fan.