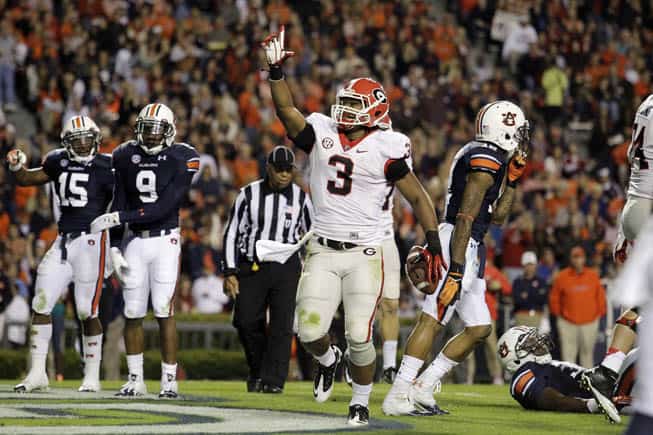 Week 12 in the SEC is one of the lightest in recent memory. The combatants in Atlanta are still undecided, but there are still consequences all over the conference. Florida is essentially playing for their postseason lives. Vanderbilt can — and should — again become bowl-eligible. Kentucky could shed their current title as the lowest-scoring team in the SEC. While a lot of the action will take place over the next two weeks, we will take you through the storylines of this week’s games.

Before we take a spin through the five tilts, however, we owe you a trivia question!

SEC Trivia, Week 12 (answer at the end of the column): Troy became a Division I program in 2001, and owns two victories over current SEC members. Against whom did Troy gain those two victories?

Program guide: Georgia started to look a little more like their old selves in a romp over Appalachian State last week. The Bulldogs compiled 568 yards of total offense against the Mountaineers, with Aaron Murray completing 19-of-26 passes for 281 yards and two scores before receiving the remainder of the afternoon off. Todd Gurley looked good in limited action, carrying 13 times for 75 yards. Receiver Michael Bennett returned to the lineup to catch five passes for 87 yards.

Despite Georgia’s numerous injuries, the Bulldogs still rank fourth in the conference in total offense, tallying fewer than 414 yards in a game just once this season. The Bulldogs have registered 982 yards of offense in two November contests. With Bennett and Gurley back in the lineup, the complexion of Mark Richt and Mike Bobo’s offense becomes completely different.

We’ve spent a lot of space in this column — and we’ll spend more in a bit — talking about Auburn’s offensive prowess, but the Tiger defense merits mention. Auburn ranks just tenth in the conference in total defense, despite having the conference’s second-best pass rusher in Dee Ford. Auburn has experienced their share of concerns in defending the pass, allowing the third-most passing yards in the conference. That unit appears to have turned the corner of late, though, as their last three opponents have thrown for 402 total yards. Conversely, two of the four 200-plus yard rushing games the Tiger defense have allowed have come in the last two games, with Arkansas rushing for 222 yards and Tennessee rushing for 226.

Despite their concerns with stopping the run, Auburn has no such concerns with running the ball themselves. The Tigers have rushed for 3200 yards this season. Only two other SEC teams (Missouri with 2300 and Arkansas with 2097) have even broken the 2000-yard plateau. Auburn’s 33 rushing touchdowns also lead the league by a considerable margin. After chronicling the Tigers’ rushing success in this space last week, Gus Malzahn’s club racked up 444 yards on the ground against Tennessee, to go with five rushing touchdowns. Georgia’s fourth-best rushing defense in the SEC was bolstered by a 32-carry, 32-yard performance by Appalachian State last week. This ended a streak of four consecutive 100-plus yard rushing outings allowed by the Bulldogs.

Despite Georgia’s injuries, this game should still be close throughout. Georgia can still salvage a major bowl berth despite all that has taken place, while Auburn looks to take some momentum into their bye week before the Iron Bowl. The quality of opponent should keep Auburn from looking ahead to their date with the Tide. The Tigers are 8-1 when rushing for greater than 200 yards, so Auburn will clearly need to continue their control of the ground game to defeat Georgia and set up a winner-take-all game on the plains.

Trivia answer: I asked earlier: Troy became a Division I program in 2001, and owns two victories over current SEC members. Against whom did Troy gain those two victories?

Go Gamecocks….and Auburn for this weekend.

I don’t get into the prediction-making business in this space all that often, but I wouldn’t be remotely surprised if the Gamecocks wound up in Atlanta. I don’t know how the HBC keeps doing it, but he does.

Really good synopsis of weekend games in the SEC.One can only imagine the Ga.-Auburn game,had not all the injuries have come to Ga.this season.It still could be a Last minute win,but Auburn should control the ball and the outcome.The rest of the games should go as expected.

keeps doing what? not making the SEC championship game? not closing the deal? I don’t get it?