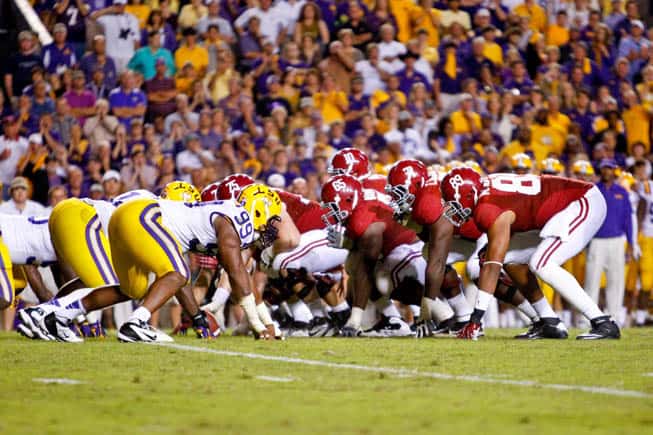 Just four weeks remain in the SEC’s regular season, and the road to Atlanta is still littered with traffic. The Iron Bowl may decide the West — but in this conference, in this year, who knows — and the East still features Missouri as the lead car, but South Carolina is inches from its bumper. Though the Tide and Tigers appear most likely to occupy the sidelines in the Georgia Dome in just under a month, we still have unanswered questions. This week may not answer many of those questions, but most of the conference contenders will pass another milepost this weekend.

The key game will obviously take place in Tuscaloosa, but bowl eligibility and positioning are on the line in Knoxville, Gainesville, Oxford and Athens. We’ll visit those sites — and all those we’ve not yet mentioned — in just a few seconds, but first, here’s our trivia question!

SEC Trivia, Week 11 (answer at the end of the article): Alabama has one loss to a non-SEC top-25 team since the beginning of the 2008 season. To which team did Alabama suffer that loss?

Program guide: Considering the recent history between these two schools, a lot of fans imagined this game would be for the SEC West title. The Tigers are two games out in the division race, though, which would seem to render that outcome virtually impossible. There is still plenty for which to play, of course, and these two teams can be counted on to play their usual classic under the lights in Tuscaloosa.

Both teams come into this game off a bye (LSU’s Les Miles has won five of seven games after a bye), allowing some extra time to prepare. LSU scored 28 unanswered points in the second half against Furman on October 26th, compiling 672 total yards of offense in the process. Zach Mettenberger completed 16-of-24 passes for 328 yards, throwing for three touchdowns while being intercepted twice. SEC all-purpose yardage leader Odell Beckham Jr. caught six passes for 204 yards in the contest.

The Tigers’ sports information department points out an incredible statistic between these two teams. Alabama has only outscored LSU 191-179 in the teams’ last nine games against each other. The last regular-season game that finished with a double-digit margin of victory was LSU’s 28-14 victory over Alabama on November 11, 2006. LSU has never defeated a top-ranked team on the road, however, having lost at Maryland in 1955 and at Florida in 1994 and 1996.

The Crimson Tide enjoyed a big victory their last time out, hanging 479 yards and 26 first downs on the Volunteers in their five-touchdown victory. AJ McCarron completed 19-of-27 passes for 275 yards and two scores, while Kenyan Drake and T.J. Yeldon combined for 29 carries, 161 yards and three touchdowns. Tennessee converted just 3-of-12 third downs in the contest, punting five times and turning the ball over on two Justin Worley interceptions.

This game also matches two of the top defenses in the country. Alabama and LSU have allowed the fewest touchdowns of any defense since 2009. Alabama has only allowed 78 touchdowns, while LSU is second with 115. Alabama leads the conference (LSU is third) in total defense. The real difference is in points per game, particularly among conference opponents. Nick Saban’s club allows 9.8 points per game to SEC foes, while LSU has given up 24.8 points against other conference teams. Alabama has allowed greater than 322 yards of defense just once this year — 628 at Texas A&M — while LSU has eclipsed that total four times.

Considering Alabama’s offensive firepower this season, the defensive contest we have come to expect from these two teams may not come to pass on Saturday. An Alabama victory draws us one step closer to Atlanta, while an LSU win throws the West into chaos, much like the East.

Trivia answer: I asked earlier: Alabama has one loss to a non-SEC top-25 team since the beginning of the 2008 season. To which team did Alabama suffer that loss?

Another of the well written,extremely analytical pieces that we have come to expect from Mr Wilmer.His usage of statistics and unusual tidbits entertain as well as educate.The feature game is,of course,the only game where one might entertain an upset,however Bama plays their best against the better teams.
Thanks again,Brian,for such a strong analysis of this weeks games.