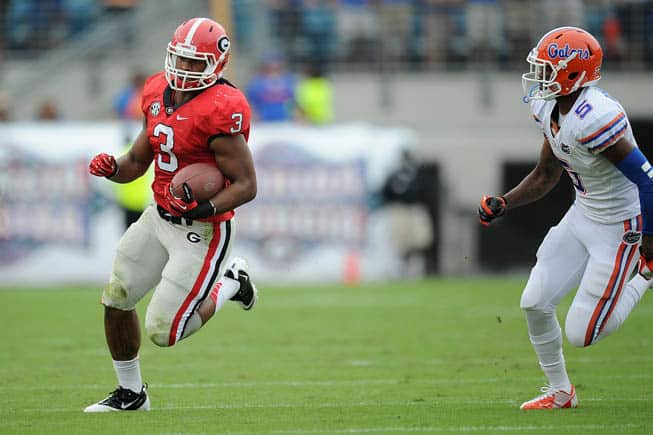 It’s early November in northeastern Florida, and the World’s Largest Outdoor Diet Coke Party is upon us. Though I did not grow up in either participating state, if anyone asks me about this game and its history, I always go back to the same play. Every rivalry has its plays (“Wide Right”, for example), but every fan — on both sides — knows the meaning of Lindsay Scott.

The festivities in Jacksonville highlight an otherwise “down” weekend (to some, anyway) around the Southeastern Conference before next week’s gigantic tilt in Tuscaloosa between LSU and Alabama. With our focus on Jacksonville this week, Tuscaloosa next week and Atlanta in the weeks shortly thereafter, things are really starting to heat up in the SEC. We’ll look at the calm before the proverbial storm, but first, our trivia question!

SEC Trivia, Week 10 (answer at the end of the column): The Georgia-Florida game each year is played for a trophy. What is the name of that trophy, and in what year did it originate?

Program guide: There are few more tired cliches than “throw out the records”, but it is this cliche on which we rely in this game. Both of these teams are ravaged by injury, with a number of key playmakers missing for each side. The Gators and Bulldogs enter the game unranked, something that has happened just one other time in 33 years. Florida won that 2010 game 34-31 in overtime.

The Gators’ offensive struggles have been well-chronicled throughout the year, and injuries and ineffectiveness have amplified those concerns. Florida ranks 110th in the FBS in total offense, averaging just 336.9 yards per game. The Gators are 12th in the SEC in points per game (21.1). Florida has been outscored 53-23 in their last two games, gaining just 391 total yards in those games.

Florida’s usually reliable defense also let them down against Missouri. The Tigers gained 500 yards of offense against Florida. This outing came on the heels of a 327-yard game by LSU in a 17-6 victory. Will Muschamp’s defense still leads the conference, but their once-considerable lead has shrunk to just under eight yards per game.

Georgia’s offense has also experienced its share of misery without many of Aaron Murray’s weapons. Murray compiled the third-lowest passing total of his career in the Bulldogs’ last game against Vanderbilt, throwing for just 114 yards. Georgia’s 221 yards of offense was by far their lowest total of the year. The Bulldogs are 4-1 when scoring greater than 30 points this season, and they have scored 26 and 27 in their last two losses. Todd Gurley and Michael Bennett are expected back for Mark Richt’s team, which will surely provide a much-needed boost.

Georgia owns victories in the last two games against Florida — two of only five victories by the Bulldogs in the series since 1990. A number of one-sided games in the 1990s have given way to a series with a slightly different complexion. The last two games (17-9 and 24-20) are likely a good place to set expectations for Saturday’s installment of the rivalry. Despite the records and injuries, expect these two to produce their usual compelling matchup.

Trivia answer: I asked earlier: The Georgia-Florida game each year is played for a trophy. What is the name of that trophy, and in what year did it originate?

The Okefenokee Oar is the trophy presented each year to the winner of the Florida-Georgia game. The oar came from a 1,000-year-old cypress tree taken from the Okefenokee Swamp, according to legend. The trophy was created in 2009.