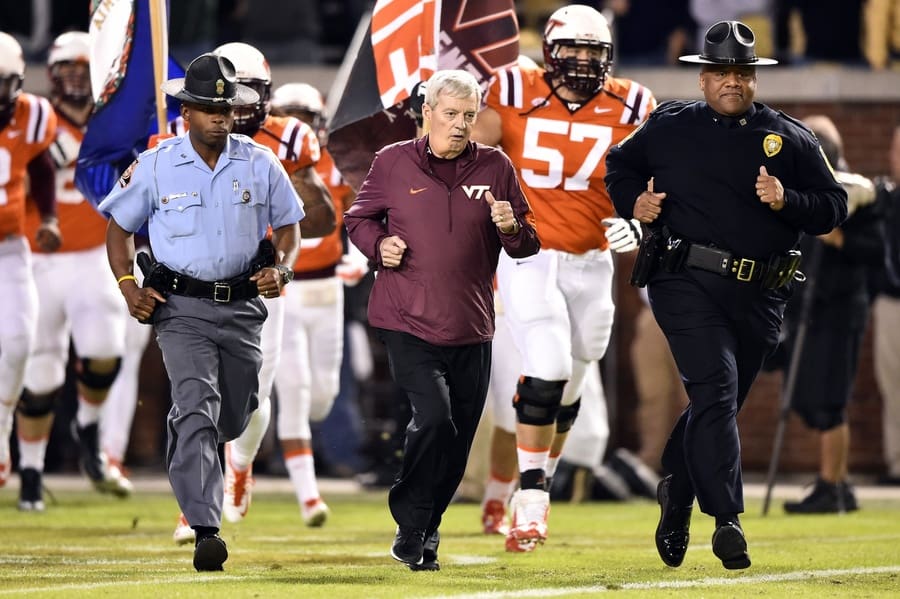 Frank Beamer will take the field in Blacksburg for the final time as the Hokies play North Carolina. (Garrett Reid-USA TODAY Sports)

That’s all that remains in many things — this ACC season, Frank Beamer’s (regular season, anyway) career at Virginia Tech, and perhaps Mike London’s tenure at Virginia. (A beaten-down fan base can hope, can’t they?) We have some great games this week, some…well, not-so-great games, and the final time a legend leads his team onto a field that should someday bear his name.

We’ll break down the eight games involving ACC teams in this space in a matter of seconds…but first, it’s trivia time — twice!

ACC Trivia, Week 12 (answer at the end of the column): Which Pro Bowl receiver participated in the NCAA basketball tournament for one of the schools in this week’s column, and for which school did he play?

ACC Bonus Trivia, Week 12 (answer at the end of the column): One Virginia Tech victory makes the Hokies bowl-eligible for the 23rd consecutive season. Whom did the Hokies play to start their streak, in which bowl did they appear, and who quarterbacked the Hokies in that game?

“My goals for these players have been the same for decades,” Beamer said. “I want them to get a quality education, have a positive experience and mature as people in our program. This has been a very responsible group that has worked extremely hard. They haven’t asked me for one thing this season. When they approached me and asked to wear the black uniforms for our final home game, I had no problem with it. If it makes it more fun for them, I’m good with it.”

Print that, tweet that, whatever: The game almost feels secondary, at this point. Thanks, Coach. You are Virginia Tech football, and will always be.

Print that, tweet that, whatever: Miami looks to bounce back after a throttling by North Carolina. Georgia Tech looks to close out a lost season on a high note.

Print that, tweet that, whatever: A tough season for the Orange looks to only get tougher. NC State will look to sharpen themselves for North Carolina next week.

Program guide: Chattanooga has already won the Southern Conference title for the third consecutive year. With that distinction, they have also claimed an automatic bid in the FCS playoffs. This game will wrap the Mocs’ regular season, a year in which they enjoyed a seven-game winning streak sandwiched around losses to Jacksonville State and Mercer. The schools have played twice (1984 and 2008), with the Seminoles winning by a combined margin of 83-7.

Print that, tweet that, whatever: Chattanooga is one of the best teams at the FCS level and will compete against Florida State, but the Seminoles should handily win.

Print that, tweet that, whatever: Just like his cross-state counterpart, one has to think Mike London is on his — much less enjoyable, granted — farewell tour.

Print that, tweet that, whatever: No matter the score of this game, save your tweets and funny memes about Clemsoning. Please. For the love of the internet.

Print that, tweet that, whatever: The Cardinals have won four in a row and six of seven. The Panthers broke a two-game losing streak by hammering Duke. This should be fun.

Print that, tweet that, whatever: When these teams take the field, it will have been 56 days since BC last won a game. That streak appears likely to continue.

Trivia answer: I asked earlier: Which Pro Bowl receiver participated in the NCAA basketball tournament for one of the schools in this week’s column, and for which school did he play?

Six-time Pro Bowler Terrell Owens played in the 1995 NCAA tournament for Chattanooga. His Mocs were a 15 seed, but lost 100-71 to UConn in their first game. Owens took one shot in that game. T.O. averaged just shy of two points per game in 16 contests as a Moc hoopster.

Bonus trivia answer: I asked earlier: One Virginia Tech victory makes the Hokies bowl-eligible for the 23rd consecutive season. Whom did the Hokies play to start their streak, in which bowl did they appear, and who quarterbacked the Hokies in that game?

The Hokies defeated Indiana 45-20 in the 1993 Independence Bowl. Maurice DeShazo (Bassett, Virginia) quarterbacked the Hokies that day, going 19-for-33 for 193 yards with two scores and two picks. DeShazo was named the Offensive MVP of the bowl. The Hokie passer completed 397-of-744 passes for 5720 yards in his career in Blacksburg, notching 47 touchdowns against 31 interceptions. He never played in the NFL.

Really good piece.I am of the mind set that Carolina beats Tech at Blacksburg,and cements a spot in the championship game.
Of the rest of the games,Pitt and Louisville could be the best of the lot.