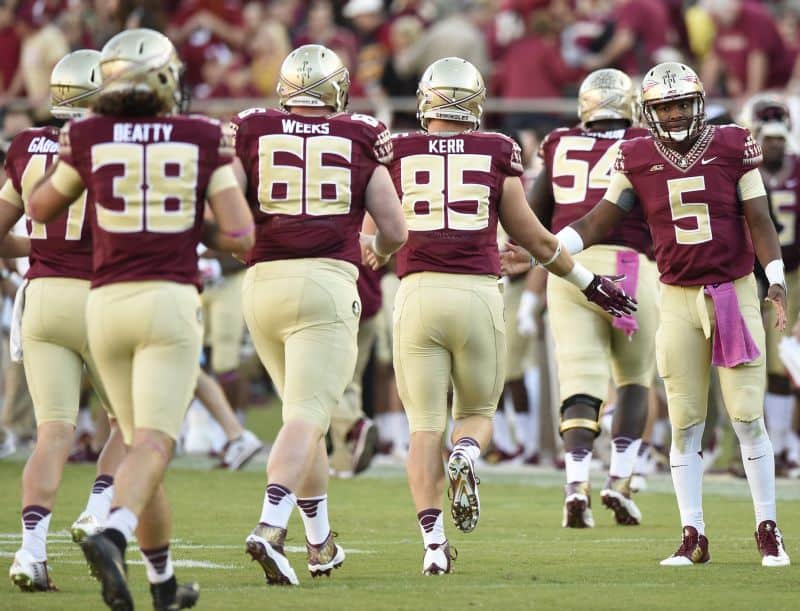 It almost seems an insult to call last week “as expected” in the ACC, but the conference essentially held serve.  This does not mean, of course, that there weren’t lessons learned from last week’s action.  Let’s take a spin through the top three storylines from last week’s ACC play.

We’ve got seven games to preview this week, but before we do, here’s your trivia question!

ACC Trivia, Week 8 (answer at the end of the column):  North Carolina’s Marquise Williams became just the fifth FBS-level player to record a passing, rushing and receiving touchdown in the same game twice in a collegiate career since 2000.  Name at least two of the other four.

Top of the Ratings (all times Eastern and rankings AP)

Program guide:  Ah yes, a second consecutive “kinda, sorta” ACC game for the Irish.  Though last week’s game was a great one — if you love offense and not defense, anyway — there is obviously a lot more “heat” to this one.  Gameday will be in attendance in Tallahassee, prompting fans to organize boycotts and direct anger at noted internet rabble-rouser Clay Travis.  There’s so much I could say about all of this, but let’s just focus on the game, shall we?

The Irish had yet another prolific offensive contest last weekend against North Carolina, moving the chains 27 times and combining for 519 yards of total offense.  Everett Golson completed 21-of-38 passes for 300 yards and three scores against a lone pick.  Notre Dame also got solid balance from their rushing game, as four of their touchdowns came on the ground.  This balance is going to be absolutely vital to lock down the Seminoles.

Of course, as of press time, we are embroiled in yet another controversy about mercurial FSU quarterback Jameis Winston.  The uncertainty over his situation and whether or not Jimbo Fisher will discipline the quarterback over the autograph allegations floating around him has moved the line of the game — we don’t offer gambling advice here, dear readers, so if you ever lose a dollar, it’s on you — down almost seven points in the last week, before finally coming off some boards entirely.  That said, the primary focus of many Florida State fans has been to call those who voted for their team anything other than number one in the polls and dared to report actual news “haters”, which is intellectually lazy, and something which most FSU fans should be above.

The Seminoles come into this game after a somewhat pedestrian thumping — if such a being exists — of undermanned Syracuse.  FSU amassed 482 yards against the Orange, with Winston completing a tidy 30-of-36 passes for 317 yards and three scores.  Dalvin Cook added 122 rushing yards, with Rashad Greene snatching six passes for 107 yards.

This is the closest thing we’ve had to a “must-see” game in the ACC for quite a while, and everyone should be tuned to their sets.  Of course…

Print that, tweet that, whatever:  If Notre Dame wins, all hell is going to break loose, for a number of reasons.  I want — and don’t want — for this to happen.

Print that, tweet that, whatever:  Though Tech has been less than impressive at times this year, Pitt has lost three consecutive games.  Tough road at home.

Print that, tweet that, whatever:  Woof.  There’s not much else to say about this one.

Print that, tweet that, whatever:  This is an ACC Network game, so be prepared for what seems like a 13-hour contest.  The winner has the inside track to Charlotte.

Print that, tweet that, whatever:  Clemson must contain Murphy and get their defense off the field.  Their offense has struggled without Deshaun Watson.

Print that, tweet that, whatever:  State hasn’t had a bad year, per se, but Louisville is so suffocating on defense that it’ll be tough for the ‘Pack to punch through.

Print that, tweet that, whatever:  Carolina’s best and brightest hope is to get a big early lead and hang on for dear life.  They have to stop someone sometime, right?

Trivia answer:  I asked earlier:  North Carolina’s Marquise Williams became just the fifth FBS-level player to record a passing, rushing and receiving touchdown in the same game twice in a collegiate career since 2000.  Name at least two of the other four.

Dak Prescott and Jameon Lewis of Mississippi State accomplished the feat twice, as did former Rice (and Houston Texans) tight end James Casey.  Former Browns kick returner Joshua Cribbs was the other player to do so, while playing at Kent State.

While there are several games that are big this weekend,the FSU and Va, games are the biggest.If ND.wins and Va.wins,we have a real turn of events for the conference.Hopefully,those two games go my way,and Tech loses to Pitt.That makes everything right with the world.