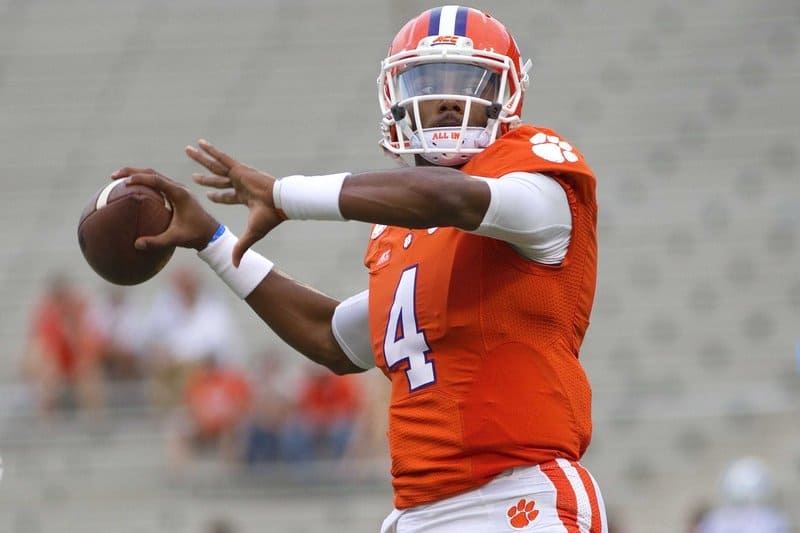 Good grief.  Your humble correspondent takes a week off, and everything goes crazy.  NC State had Florida State’s shoulders on the mat before being distracted while the manager argued with the referee, being hit with a chair or something.  Duke had a chance to put themselves in tremendous shape in the Coastal before a subpar effort at Miami.  Pitt lost a second-straight game they should have won, but now find themselves tied at the top of the Coastal, thanks to the aforementioned Duke loss.  Virginia eclipsed last year’s win total after just five weeks, thanks to their hammering visiting Kent State.  Finally, Clemson’s offense answered their wake-up call, but have they slept through their chance to play in a big-time bowl game?

We have just six conference games on the docket this weekend, but there are still a number of questions.  Florida State is clearly not the team they were last year — despite their continued number-one ranking — but what should we expect from the Seminoles going forward? Can one of the teams who has slipped early (Virginia Tech, North Carolina, Clemson) turn it around and become a factor for the conference title? Can Virginia continue their improbable — nay, impossible run to Charlotte? We might get closer to answers this week, but until we do, let’s ask our trivia question!

ACC Trivia, Week 6 (answer at the end of the column):  Georgia Tech has started the season 4-0.  When was Georgia Tech’s last four-game winning streak, and whom did the Yellow Jackets beat to achieve it?

There are no real “marquee” matchups this week, so all six get equal billing.  Off we go to the Keyword Search feature!

Trivia answer:  I asked earlier:  Georgia Tech has started the season 4-0.  When was Georgia Tech’s last four-game winning streak, and whom did the Yellow Jackets beat to achieve it?

Georgia Tech last won four consecutive games in 2011.  Paul Johnson’s club won their first six that year (Western Carolina, at Middle Tennessee, Kansas, North Carolina, at NC State and Maryland), before being defeated 24-21 by Virginia in Scott Stadium.  Tech would lose six of their final eight that year, including a 30-27 overtime loss to Utah in the Sun Bowl.

Once again,very good breakdowns on the games this weekend.There is a lot to be decided in the Coastal,and right now,it is anybody’s conference.Will the cream start to rise,or will it be crowded at the bottom?
Great job,as usual ,on the game breakdowns.