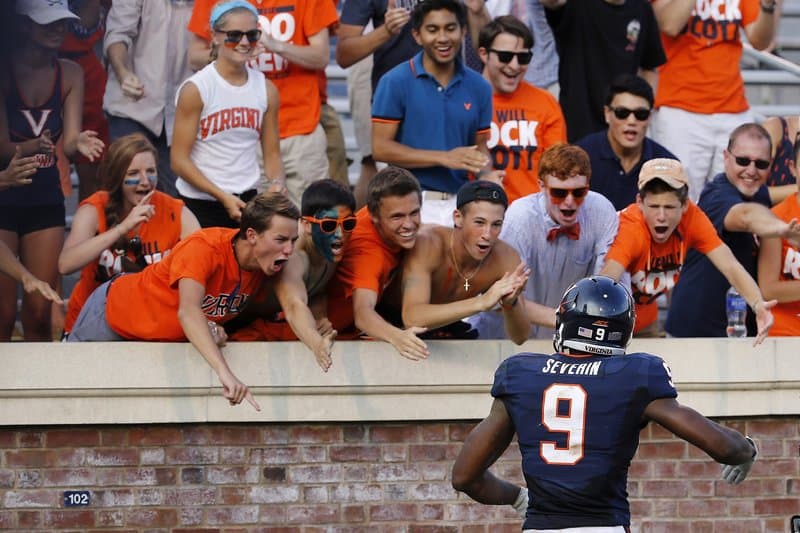 (Author’s note: This week’s editions of Clear Your Schedule will be slightly condensed. We’ll make up for it next week. Promise.)

It’s another one of those weeks in the ACC. There’s one conference game, a couple of decent out-of-conference contests…and then, there’s everything else. This is not to say that those games will be bad, as much as the pairings are relatively unfamiliar. Two games involve teams in their first-ever meeting, while another six involve teams that have played two or fewer times. Without history on our side, we’ll be getting a little creative.

It also bears mention that the ACC went 11-0 last Saturday. The conference has never won that many games in a weekend or a day.

Before we unveil our creative side, let’s create a trivia question!

ACC Trivia, Week 3 (answer at the end of the column): Virginia Tech’s defeat of Ohio State in the Horseshoe last weekend was the first time in five years that an ACC team outside of the top 25 beat a top-10 team on the road (not a neutral site). Who was the most recent ACC team to accomplish that feat, and whom did they defeat on that day?

Program guide: The first-ever road game in the ACC for the Cardinals takes place in Scott Stadium. Virginia has lost all six games in program history against first-time ACC opponents (Georgia Tech, Florida State, Miami, Virginia Tech, Boston College and Pitt). It has also been five years since the ‘Hoos have won their first ACC game of the season. Both schools come in off of hammering FCS opponents, and as we previously mentioned in this space, both teams’ quarterbacks (Louisville’s Will Gardner and UVa’s Greyson Lambert) are Georgia natives from the same recruiting class. Virginia is 97th in total offense (358 yards per game) — indicative of the instability of their two-quarterback system and Steve Fairchild’s system — and 107th in pass defense (302.5 yards per game).

Print that, tweet that, whatever: Mike London could do wonders for his shaky status in Charlottesville with a victory. Defeating the nationally-ranked Cards won’t be easy.

Program guide: The Pirates enter this contest coming off a 33-23 defeat at the hands of the HBC and the South Carolina Gamecocks in Columbia. Quarterback Shane Carden completed 32-of-46 passes for 321 yards and a score; however, ECU’s leading rusher had just four carries for 58 yards. This is a bad omen against a Hokie rush defense allowing just 184 yards this season on 68 attempts (2.71 yards per carry). An even worse omen is that opposing passers have the lowest completion percentage against them (34.6 percent) of any ACC school.

Print that, tweet that, whatever: Tech beat ECU 15-10 last year in Greenville. ECU only threw for 158 yards. If the score’s that low again, that’s bad for the Pirates.

Program guide: Despite these two schools being just over 200 miles apart, they have never met on the gridiron. The Eagles are in their first year of FBS play, after dominating at the FCS level. Paul Johnson won back-to-back I-AA national championships (1999 and 2000) while coaching in Statesboro. Though GSU has a new coach in Willie Fritz, there will be a very familiar look on the opposing sideline. Georgia Southern is last in the Sun Belt in passing attempts (22), and is one of just three teams in the conference with fewer than 30 passing attempts. The Yellow Jackets, meanwhile, have attempted just 24 passes through two games. No other team has thrown fewer than 30 times.

Print that, tweet that, whatever: This is a classic battle of option teams. Whichever team stops the run better (GSU’s 62nd nationally, Tech 97th) wins the game.

Program guide: Interestingly enough, much of the focus around the FIU program has not been around their play on the field, but on their “will they or won’t they” credentialing dustup with one of the program’s local beat writers. Miami Herald reporter David J. Neal was not credentialed for the Panthers’ opening game, but will be in attendance going forward. In on-field action, Pitt followed up a season-opening blowout of Delaware by securing their first ACC win of 2014, defeating Boston College 30-20. Pitt running back James Conner leads the ACC in rushing by 78 yards per game, averaging 183 yards per contest. Pitt is fourth in the nation in rushing offense. FIU, on the other hand, is ranked 100th or worse in three of four major offensive categories. The other category, passing offense, finds the Panthers ranked 96th. Pitt is FIU’s first FBS opponent this season.

Print that, tweet that, whatever: FIU has good defensive numbers, but their two FCS opponents haven’t had James Conner or Tyler Boyd. A potentially long day for FIU.

Program guide: It’s been four years since Syracuse beat a MAC team on the road (Akron in 2010), and the Orange head to Mount Pleasant having scraped out (almost literally) a 27-26, double-overtime victory over FCS opponent Villanova in their only game of the year. Central Michigan beat Purdue on the road 38-17 last week, but has never beaten Syracuse or any current member of the ACC.

Print that, tweet that, whatever: Central Michigan hasn’t started a season 2-0 — until now — since 2002. If Syracuse isn’t careful, the Chippewas could start 3-0.

Program guide: Here’s the good news: Kansas is 1-0. Here’s the bad news: That win was a six-point victory over FCS-level Southeast Missouri State. Here’s the ugly news: That win was Charlie Weis’ fifth in 25 outings at Kansas. The even uglier news than that: Two of those five wins are against schools from South Dakota. Duke, meanwhile, has won ten consecutive regular-season games. Duke’s sports information department also produces this seemingly unbelievable statistic:

In six-plus seasons under (David) Cutcliffe, Duke has had
16 home crowds of 30,000 or more. In the previous
eight campaigns, the Blue Devils had just four.

Print that, tweet that, whatever: The Jayhawks have exactly 100 more wins than Duke in program history. Most of us will be stunned if it goes to 101.

Program guide: These schools are among those who have played just once. To tell you how long ago that meeting took place, Edgerrin James led the ‘Canes in rushing, carrying 13 times for 151 yards and two scores. Miami won that game 42-10 in 1997. The Red Wolves were outgained 415-to-331 in a 34-19 loss to Tennessee last week. Quarterback Fredi Knighten compiled over 220 all-purpose yards in the contest. Miami comes into the game off a 41-7 pasting of Florida A&M. Freshman quarterback Brad Kaaya had a nice bounce-back effort in that one, going 12-for-22 for 177 yards and throwing for two scores, despite two rips.

Print that, tweet that, whatever: The Red Wolves have a competitive program and a great coach in Blake Anderson. So tough to win in Coral Gables, though.

Program guide: The Wolfpack have yet to play a conference game, but this is a huge contest for State head coach Dave Doeren. A win here matches his win total from last year. Though Doeren has yet to notch a conference win, the Wolfpack program is clearly making strides. Meanwhile, Willie Taggart’s club is slowly turning the tide in Tampa. Freshman running back Marlon Mack carried for just 73 yards last week in a 24-17 loss to Maryland, after a record 275-yard, four-TD performance in week one against Western Carolina.

Print that, tweet that, whatever: Both of these young coaches — and programs — could use a win here. Could we see 4-0 NCSU hosting Florida State on September 27?

Program guide: Wake Forest enters this game coming off a win against Gardner-Webb, but there are still a lot of warning signs for new coach Dave Clawson’s club. The Deacs are 114th in the FBS in scoring offense (16.5 points per game), 121st in rushing offense (46.5 yards per game) and 120th in total offense (240.5 yards per game). Utah State quarterback Chuckie Keeton has somewhat struggled out of the gate (31-for-65, 260 yards, 1 TD, 3 INT), but is still an elite talent. No ACC team has ever visited Utah State’s Romney Stadium, and just one “Power 5” school (Utah in 2012) has played there since 2001.

Print that, tweet that, whatever: The Aggies look for a power-conference victory on Saturday. Though Wake Forest is no Florida State, an ACC win would be an ACC win.

Program guide: If you’re looking for an early “statement” win, it’s tough to beat USC’s 13-10 victory at Stanford last week. That contest set the tone on both the Pac-12 and national stages. The Trojans were outgained by greater than 120 yards in the game, but still managed to come away with the decision after a late 53-yard Andre Heidari field goal. BC quarterback Tyler Murphy is averaging over 100 yards per game on the ground early on this season, but that success is coming at the expense of the passing game for the Eagles. Boston College is 104th in the nation in passing offense, throwing for 172.5 yards per game in the first two contests.

Print that, tweet that, whatever: USC is 4-0 against Boston College in series history. With potential weather and a tough opponent, BC has a challenge to avoid a 5-0 mark.

Trivia answer: I asked earlier: Virginia Tech’s defeat of Ohio State in the Horseshoe last weekend was the first time in five years that an ACC team outside of the top 25 beat a top-10 team on the road (not a neutral site). Who was the most recent ACC team to accomplish that feat, and whom did they defeat on that day?

Then-unranked Florida State pounded BYU 54-28 on September 19, 2009. Christian Ponder completed 21-of-26 passes for 195 yards and two scores in the contest. The Seminoles rushed for 313 yards in the game, with four FSU ball carriers registering 25 yards or greater.

As usual,a very comprehensive breakdown of the weekend games involving the ACC.There are several games that could inflate or deflate the team’s expectations,but the Va.-Louisville game has monumental impact for the Cavs and their coach.
The B.C. game would really be fun to watch if Williams was still in the backfield for the Eagles.Great job,Brian.

Great coverage! This will be my must read column from now on!!!