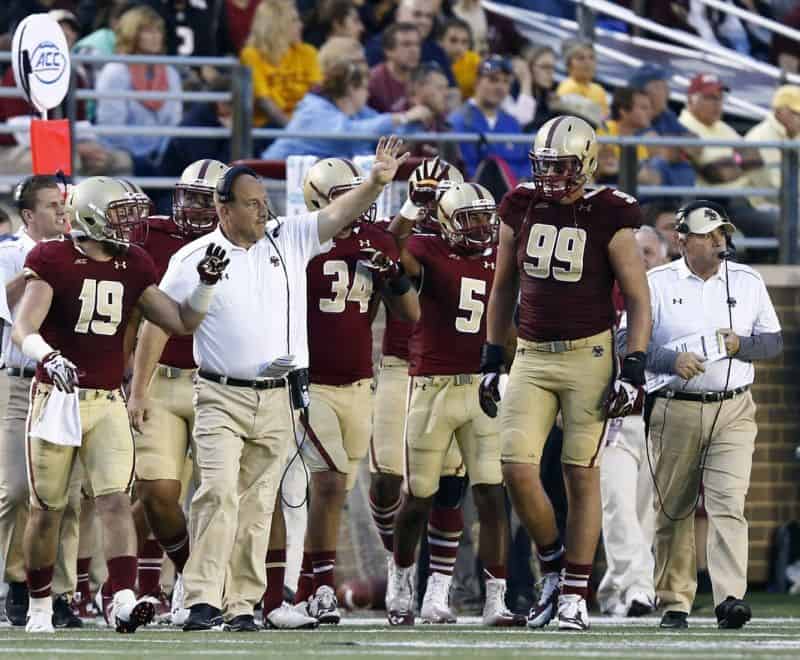 There's a lot on the line for both visiting Louisville and Steve Addazio's Boston College Eagles this weekend. (Mark L. Baer-USA TODAY Sports)

Wow, week 11 kind of snuck up on us, didn’t it? It seems as though just yesterday it was 95 degrees and we were wearing shorts and t-shirts to games.  Fast forward a couple of months, and we had snow on the ground in parts of South Carolina last Saturday.  Time flies.

Clearer — seemingly — than the weather picture in the southeast is the championship picture in the ACC.  It looks as though Duke and Florida State are on a collision course to meet in Charlotte and again decide who will hoist the conference gold.  However, if this year of ACC football has left us with one thing we know, to paraphrase an old statement, it is that we know nothing.

We’ll take a spin through the somewhat sparse five-game ACC slate, but before we do, here’s last week’s Three Big Things:

Now, about that five-game slate…it’s on the way, right after trivia!

ACC Trivia, Week 11 (answer at the end of the column):  Boston College and Louisville last played in 1998.  One of the performers set a single-game school record in that contest.  Who was that performer, and which record did he set?

Print that, tweet that, whatever:  This game could very well be a grind for Clemson without Watson.  If Watson plays, Wake is in serious trouble.

Print that, tweet that, whatever:  If Georgia Tech plays like they did last week, it’s tough to see anyone beating them.  Tech has won 11 of the last 14 against State.

Print that, tweet that, whatever:  It’s been 25 years since Duke has had back-to-back winning seasons.  With that done, could they secure back-to-back Charlotte trips?

Print that, tweet that, whatever:  Most national skeptics expect(ed) FSU to lose a game they should win.  It won’t be this one.

Print that, tweet that, whatever:  This should be a fun game.  Having to keep extra help home for Murphy’s running could open up the mid-to-long passing game for BC.

Trivia answer:  I asked earlier:  Boston College and Louisville last played in 1998.  One of the performers set a single-game school record in that contest.  Who was that performer, and which record did he set?

Former Louisville, Baltimore Ravens and Atlanta Falcons quarterback Chris Redman set a single-game Louisville record, throwing for five touchdowns in a 52-28 victory that opened Papa John’s Cardinal Stadium.  Redman threw for 362 yards in the game.  The five touchdowns gave Redman a record that he would hold for just shy of two months…until he broke it by throwing for six scores in a 63-45 victory at East Carolina.

Outstanding job of breaking down these games.We are in the short rows whereby champions are about to be crowned,bowl possibilities being ironed out,and moving vans being scheduled.Duke,Clemson,FSU,B.C.,and Ga.Tech should prevail.
Coach London,better call Allied or Mayflower,and set up a time.

Note – After this went to press, Syracuse announced that AJ Long may not play, due to a nerve problem in his arm.