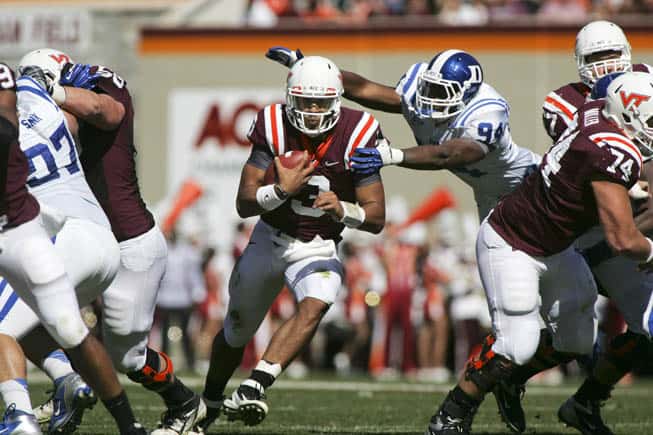 An action-packed Week 8 in the ACC started with Miami marching down the field in their final drive at Kenan Stadium, then dodging a hail mary on the final play to escape with a 27-23 victory, then ended with a 51-14 Florida State shellacking of Clemson in Death Valley. Between those games, Georgia Tech and Wake Forest made emphatic statements, Duke scored 35 unanswered points on Virginia to take home a victory and Pittsburgh held off a game Old Dominion club.

Two ACC outposts in both the Commonwealth of Virginia and the Sunshine State will see action this weekend, along with several additional locations. Florida State essentially holds a two-game lead on Clemson in the Atlantic, while everything in the Coastal appears to be building toward the upcoming Virginia Tech-Miami matchup. The march to Charlotte continues, and we’ll take a look at some of the games that will help book tickets for the Queen City and points beyond. Before we embark on our journey, we offer you a trivia question!

ACC Trivia, Week 9 (answer at the end of the column): When did Duke last defeat a ranked team on the road?

Program guide: You just saw our trivia question regarding Duke and their success against ranked opponents, and the Blue Devils have not defeated a ranked team in 20 seasons (Virginia, 1994). Anthony Boone returned for the Blue Devils last week, completing 21-of-39 passes for 245 yards and two touchdowns against the Cavaliers. Jamison Crowder also had a huge game for Duke last week, catching nine passes for 113 yards and a touchdown.

Duke has not allowed any points in the second half of the last two games. This was not the case against the Hokies in Blacksburg last season, however. Duke jumped to a 20-0 lead before Virginia Tech scored 41 unanswered points to defeat David Cutcliffe’s club. Logan Thomas completed 14-of-23 passes for 256 yards, finding the end zone twice.

The Hokie defense has enjoyed even more success this year than that to which they have become accustomed. Virginia Tech leads the conference in total yardage, averaging 256 yards per game. The Hokies rank just behind FBS leader Michigan State in total defense. Tech has been even more effective on the road, allowing just 227.7 yards per game. The Hokies have allowed greater than 300 yards of offense to just two opponents, Marshall and North Carolina.

Duke has been surprisingly proficient on offense this season, led largely by Boone and backup quarterback/flex player Brandon Connette. Duke averages 452.1 yards per game, good for fourth in the conference. Virginia Tech’s 13th-ranked offense in the ACC will face its own challenges. The Hokies have been held below 100 rushing yards on four separate occasions, and have been held under 70 offensive plays four times.

This is a tough game to diagnose. Virginia Tech is ill-equipped to compete in a potential shootout, though the Hokie defense is not likely to get involved in a back-and-forth offensive contest. Virginia Tech has won each of the last 12 games against Duke, and has won all seven played between the two in Blacksburg. If Duke is fortunate enough to jump out to another early lead, they will need to find a way to put away the Hokies, which they have not yet mastered.

Trivia answer: I asked earlier: When did Duke last defeat a ranked team on the road?

This is a tough week,as you said earlier,as the pickings are rather slim.I see that you had Tech in the feature game,which seems appropriate,as the championship could involve Tech.A very good job though for a week with so-so games.