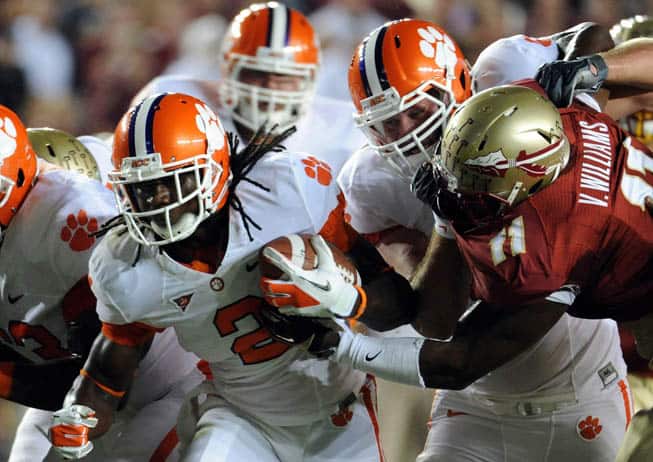 A lot of trends continued last week in the ACC. NC State and Georgia Tech’s recent slides were extended. Virginia lost their final ACC matchup against rival Maryland in heartbreaking fashion. Clemson and Virginia Tech created some additional space in their respective divisions before the latest iteration of the Game of the Century this week.

This week features that contest that will likely decide one half of the teams playing in Charlotte, along with another Thursday ESPN appearance for the conference. As the eyes of the conference — and the nation — turn toward southwest South Carolina, we’ll take you there and to the five other ACC outposts this week. Before we start the trip, it’s time for this week’s trivia question!

ACC trivia, Week 8 (answer at the end of the column): Miami has the best winning percentage (.842) of any ACC team on ESPN Thursday night games, notching a 16-3 record. Against which team do the Hurricanes own the most Thursday night victories?

Program guide: The first-ever matchup of top-five teams in the Palmetto State takes place on a national Saturday night stage, as the Seminoles make their way to Clemson. The storylines in this game are relatively obvious — Winston vs. Boyd, the top two offenses in the conference squaring off and all the rest. The Seminoles enter this game coming off a bye following their thrashing of Maryland on October 5th, a game in which Jameis Winston became the first FSU quarterback in four seasons to throw for five scores in a game. Winston and the ‘Noles have put up gaudy offensive numbers thus far, though some may argue that none of his opponents are anywhere near the quality of the Tigers.

Florida State is a top-30 team in every category, and a team the likes of which Clemson has not seen since the season-opener against Georgia. Winston’s exploits are certainly noteworthy, but the real advantage for Jimbo Fisher’s club comes on the ground. The Seminoles rush for 228.2 yards per game, 17th-best among FBS schools. FSU features three rushers in the top 20 in the conference, led by Devonta Freeman. Freeman holds the fifth-highest rushing average in the league (77 yards per game), and will get his chances against the nation’s 64th-ranked rushing defense. That defense has been extremely hit-and-miss this year, allowing two rushing efforts (Georgia and Syracuse) greater than 200 yards and three (South Carolina State, Wake Forest and Boston College) fewer than 100 yards. Then-leading rusher Andre Williams was held to just 70 yards by the Tigers.

Let it not be understated how large of a chance Clemson has to flip the proverbial script in this game. Despite that Georgia win, very few non-Solid Orange football fans trust Dabo Swinney’s troops, with many advancing the term “Clemsoning” to describe the team’s apparent inevitability of losing a game it should win at some point in the season. Clemson has not stood atop the college football world since 1981, and a victory here at least gets them into the conversation with Alabama and Oregon. With all of the hyperbole around this week’s matchup — the biggest game in ACC history, according to some — this is a program-defining game for Clemson.

Clemson offensive coordinator Chad Morris has been mentioned as an up-and-coming name for possible head coaching openings this coming offseason, and for good reason. The Tigers join the Seminoles as the only two teams in the conference to average over 500 yards a game in total offense, fielding a top-20 club nationally in scoring offense, passing offense and total offense. Quarterback Tajh Boyd leads the conference in total offense, averaging 328.3 yards per game, and Boyd’s veteran leadership will provide an interesting contrast to the high-profile freshman (Winston) who is ranked second in the conference in the same category. Much as with the Seminoles on the other side of the ball, Clemson’s rushing game will be a key item of focus in this contest. Will we see the Florida State that allowed 33 yards of rushing against Maryland two weeks ago, or the team that allowed 200 yards to Boston College the prior week?

Trivia answer: I asked earlier: Miami has the best winning percentage (.842) of any ACC team on ESPN Thursday night games, notching a 16-3 record. Against which team do the Hurricanes own the most Thursday night victories?

Extremely well written synopsis of upcoming games in the conference.Obviously,the Clemson-Fla.St.game will be the one to watch,but several others pique the imagination.I will predict that the Clem.-Fla.St.game will not be the shootout that people expect.I would say a total of 55 points ,as opposed to 85 or 90,as I have been hearing.
Miami needs to keep up it’s winning ways,as does Maryland,in hopes of a decent bowl bid.Also,Va.is at a crucial point,where they desperately need a couple of wins to avoid another season like 2012.
Terrific job of analysis.Keep up the good work.