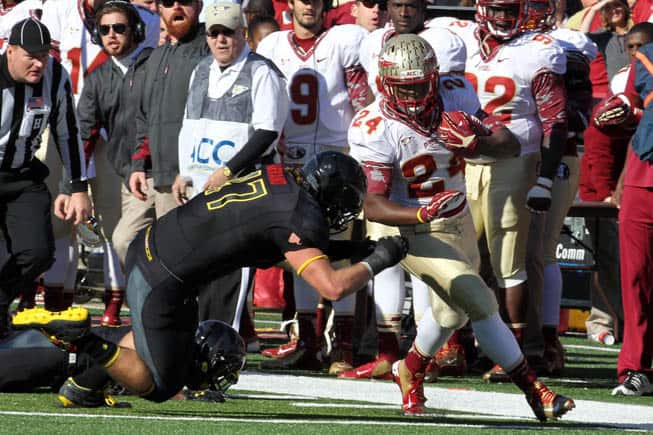 Florida State and Maryland are both undefeated this season. (Mitch Stringer-USA TODAY Sports)

Though out-of-conference play continues in the ACC, the picture is starting to get a little clearer for everyone involved. Clemson continues to look like the class of the conference, mowing through Wake Forest with ease. Florida State, Miami and Maryland continue to fight for their place in that conversation, however, with Maryland looking to back up their newly-acquired ranking on the field at Doak Campbell this weekend. Georgia Tech and North Carolina, meanwhile, suffered crippling defeats. Larry Fedora is just four games into his second season in Chapel Hill, and has already inspired a less-than-flattering Twitter account.

More of our questions about the ACC will likely receive answers this week. Is Maryland for real? Can Virginia Tech’s stout defense continue to cover up their offensive shortcomings? Will Wake Forest win an ACC game? While we await answers to those questions, here’s another unanswered question!

ACC trivia, week 6 (answer at the end of the column): Which Atlantic Coast Conference rivalry is the longest continually-played series?

Program guide: The Terrapins have not started a season with four straight wins since 2001, and they have not made an appearance in the AP Top 25 since 2010’s end-of-season poll. They were last ranked during the regular season in November 2008, a spot that lasted exactly one week before they lost to…Florida State. Randy Edsall brings his first-ever ranked Terrapin club to Tallahassee, where they have never won. In fact, the Terrapins are 0-11 all-time against Florida State.

Maryland quarterback C.J. Brown leads the ACC in total offense by a considerable margin. Brown’s 331.5 yards per game surpasses second-place Jameis Winston by almost 42 yards. Running back Brandon Ross also occupies a top-20 spot in total offense, averaging 83 yards per game. The stability at the quarterback position has vastly improved Edsall’s offense, but Maryland’s defense also deserves a lot of attention. The Terps rank second in the conference in total defense, allowing just under 264 yards per game. Their last appearance featured a whitewash of a West Virginia team that defeated ranked Oklahoma State last weekend. West Virginia mounted just 175 yards of total offense, completing only 2-of-12 third downs and turning the ball over six times. One of those turnovers was an A.J. Hendy 28-yard interception return for a touchdown.

As previously mentioned, Winston keys the Florida State offense. Running back Devonta Freeman (80.5 yards per game) ranks fifth in the ACC in rushing, and receivers Kenny Shaw, Rashad Greene and Kelvin Benjamin all find themselves in the top 15 in the conference in yards per game. Jimbo Fisher’s squad averages a gaudy 532.8 yards per game on offense, and the battle between the FSU offense and the Terrapin defense will be outstanding all day.

FSU had compiled their own stingy numbers on defense before last week’s victory over Boston College. The Eagles rushed for 200 yards against FSU — one week after FCS-level Bethune-Cookman rushed for 182 — while throwing for 197 yards. Also of note is that the BC offense was on the field for 73 plays, tied for the highest number the Seminoles have allowed all year. Maryland features two of the top seven rushers in the ACC, and FSU’s ability to contain Brown and Ross on the ground will likely tell the tale on which team walks off the field with a victory on Saturday.

Program guide: Georgia Tech rolled over their first two conference opponents in Duke and North Carolina, and a third straight victory would have given the Yellow Jackets a reasonable cushion in the Coastal Division. This was all derailed — even if momentarily — by a 17-10 loss to Virginia Tech in which the Jackets compiled 175 fewer yards than they averaged against the Blue Devils and Tar Heels. The larger concern for Paul Johnson’s team was that they rushed for 205 fewer yards than they averaged in those two prior contests.

Getting the run game back on track is the clear issue for the Ramblin’ Wreck, and this will be no easy task against a Hurricane defensive squad that ranks tenth in the nation in total defense. Miami’s lone true defensive test came against Florida, a game in which they allowed 413 yards in a 21-16 victory. Only 122 of those yards came on the ground, however. The offensive side of the ball features Duke Johnson, the ACC’s second-leading rusher. Johnson averages 97 yards per game, and has found the end zone four times on just 62 carries. Quarterback Stephen Morris guides the ‘Canes, and his already-injured ankle suffered another hit in last week’s 49-21 victory over USF. Morris has a capable backup in Ryan Williams, but Morris’ ability to throw and run with his foot concerns will be something to watch throughout Saturday’s contest.

Wake Forest and NC State will play for the 107th time this weekend. The two schools have played each other every year since 1910. The teams first played in Raleigh in 1895, a game which resulted in a 4-4 tie.

Amazing! When was the last time that Maryland and Fla.St.were the feature game of the week? This game will tell a lot about who will occupy the top rung with Clemson.The other strange tidbit for me is Miami being undefeated at this point in the season.
It is time for ‘the cream to rise to the top’,so to speak,and this weekend should create smiles for some,and frowns for others.As always,a terrific synopsis of the critical components of each of the games.

I had the same thought at first, Herandos, but the two teams went from 1905-1919 without playing each other.