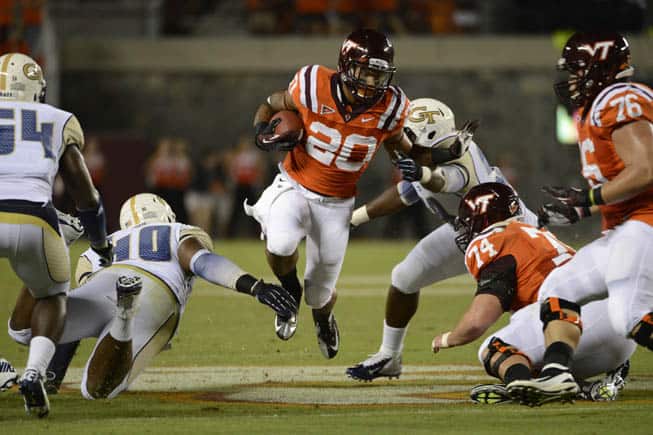 What a weird week in the Atlantic Coast Conference. Virginia Tech and Marshall played three overtimes in the pouring rain in Blacksburg before the Hokies finally emerged with a victory. Pittsburgh defeated Duke in a game that elicited basketball reference jokes across Twitter. Three conference teams defeated FCS-level opponents by a combined score of 180-13.

Week five features four conference games, with Georgia Tech attempting to create some separation in the Coastal Division on Thursday night. The early part of the out-of-conference slate also winds down this week, with teams from Conference USA, the American Athletic Conference, the Sun Belt and the Mid-American Conference facing off against ACC teams. Before we break down these games, here’s this week’s trivia question!

ACC trivia, week 5 (answer at the end of the column): Virginia Tech defeated Marshall in triple overtime last week. In what year did Virginia Tech play its most recent triple-overtime contest prior to Saturday?

Program guide: A rainy day in Blacksburg eventually proved fruitful for the Hokies, as several opportunities for Marshall eventually went by the boards. Frank Beamer’s club has not necessarily won beauty pageants in winning three of its first four games, but an interesting test awaits in Atlanta on Thursday. The Hokie rush defense faced a tough foe in Marshall’s Essray Taliaferro (26 carries, 105 yards), but the Yellow Jackets present a considerably larger challenge.

Georgia Tech ranks fourth in the FBS in rushing, averaging 345.3 yards per game. The Ramblin’ Wreck ran the ball a staggering 71 times in their victory over North Carolina last week, going for 324 yards (4.6 yards per carry). Running backs David Sims and Robert Godhigh tallied 26 of those carries for 199 yards and two touchdowns, while quarterback Vad Lee ran the ball 24 times for 55 yards and another score. The Hokies rank fifteenth in rushing defense, allowing 96.5 yards per game.

The Hokie defense has carried the day thus far this season, with Virginia Tech ranking 76th or lower nationally in all offensive categories. Quarterback Logan Thomas struggled again last week, completing 18-of-34 passes for 181 yards with a touchdown and two interceptions. Thomas’ struggles have continued this season under new offensive coordinator Scot Loeffler, as he has completed just 48.5 percent of his passes, throwing six interceptions against just four touchdowns. Georgia Tech’s defense ranks in the top 25 in every defensive category, so if Thomas struggles early, he may not be able to throw his way out of trouble.

Special teams will also play a large role in this contest. Virginia Tech blocked its first punt against an FBS team since 2010 and its first field goal since 2008 last week. Special teams struggles were the story of the day, as Marshall’s Justin Haig and Virginia Tech’s Ethan Keyserling combined to miss all five of their field goal attempts. Regular Hokie kicker Cody Journell was suspended for the game, but he has only converted two of four kicks on the season.

The game looms large for both teams as they move forward in the conference schedule. Georgia Tech looks to go to 3-0 in early conference play, while Virginia Tech has a chance to notch a “signature” win before three straight conference home games against North Carolina, Pitt and Duke.

Program guide: When last we saw East Carolina, they were walking off the field after a 15-10 loss to Virginia Tech in Greenville two weeks ago. Despite the Hokies’ best attempts to give the game to the Pirates through special teams miscues, the Pirates fell 15-10. Quarterback Shane Carden threw three interceptions against Tech, with a fourth turnover (of sorts) coming on a fumble in the end zone that led to a safety. ECU allowed just 53 rushing yards to freshman standout Trey Edmunds and the Hokies, though they only managed 46 rushing yards of their own. The high-flying Pirate offense from earlier in the year needs to return — and fast — to put points on the board against their regional rivals.

The Tar Heels fell to Georgia Tech last week, but tight end Eric Ebron is starting to heat up after a somewhat average start. Ebron has caught 10 passes for 168 yards and a score in the last two games, and he is starting to create matchup problems for defenses as expected. Star wideout Quinshad Davis has only managed four grabs for 54 yards during the same time period. Carolina needs to find ways to get their wide receivers more involved in the game, as East Carolina’s pass defense is ranked 96th in the nation. Larry Fedora’s squad has big, athletic receivers with the capacity to win one-on-one matchups every time off the line, and the Tar Heel offense needs to open up Bryn Renner to take those shots down the field.

Trivia answer: I asked earlier: Virginia Tech defeated Marshall in triple overtime last week. In what year did Virginia Tech play its most recent triple-overtime contest prior to Saturday?

The Hokies’ most recent triple-overtime game was played in the Carrier Dome in Syracuse in 2002. The Orange won the game 50-42.

Another outstanding synopsis of the games on this week’s agenda.The game between the Techs (Ga.),and( Va.),is obviously the game of the day,but the Fla.St.vs.B..C.game could be huge as well.At some point you expect to see the herd being thinned out,and the leaders emerging.This should be that week.

Right – the won/lost record for Dabo this piece references is just his record against ACC opponents at Memorial, not all opponents.