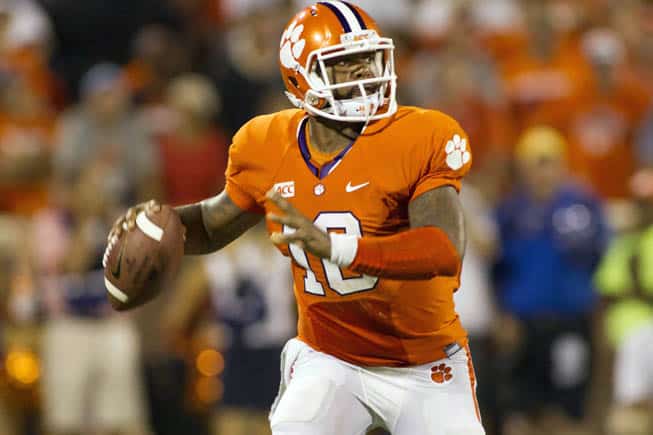 Week 4 has arrived in the Atlantic Coast Conference, and we have an interesting group of games completing the conference slate. The two Florida schools are welcoming HBCUs, the Maryland-West Virginia rivalry fires up again and two marquee conference games take place. ACC teams registered a 6-3 record last weekend, with one of those losses (Duke) coming in a conference game. We have a number of storylines to cover in this week’s ten league outings, but first, we have our weekly trivia question!

ACC trivia, week 4 (answer at the end of the column): Clemson and NC State renew their rivalry on Thursday. What is the name of the rivalry, and in what year was that name created?

Program guide: Clemson’s high-powered offense suffered a bit of a blow during the team’s off week, as wide receiver Charone Peake tore an ACL and will miss the remainder of the season. This is a painful loss for the Tigers — literally and figuratively — but freshman receiver Germane Hopper (6 catches, 66 yards, 2 TD) appears ready to step in for Peake as Dabo Swinney’s club takes on the Wolfpack in Raleigh. The Tigers are a top 25 team in total offense (16th) and passing offense (25th), and quarterback Tajh Boyd set a school record with 529 total yards in a 62-48 victory over NC State last year.

The Tiger defense is still a bit questionable, though their numbers are still shaped by the season-opening 38-35 victory over Georgia. The results were considerably better two weeks ago against the FCS Bulldogs, allowing just 11 first downs and 201 yards of total offense. Constant pressure from defensive lineman Vic Beasley (2 sacks) and linebacker Spencer Shuey (15 tackles, one quarterback hurry) will be a requirement to slow down the new-look Wolfpack offense.

Wolfpack head coach Dave Doeren has never lost any game he has coached at home in his career (14-0), and he will look to continue that streak against the Tigers. The streak was perilously close to ending two weeks ago against Richmond. The Spiders led the game 21-13 at the half, but could muster very little against the ‘Pack defense in the remaining quarters. Niklas Sade nailed a 48-yarder with 33 seconds remaining to give Doeren’s club the victory.

Colorado State transfer Pete Thomas continues to fill in at quarterback for injured starter Brandon Mitchell, and Thomas’ efficiency was a key part of the State win. Thomas completed 24-of-31 passes for 237 yards, though he was unable to find the end zone. He was 4-of-5 for 31 yards on the final drive, which set up the game-winner. The heralded Wolfpack rushing attack was relatively effective, carrying 41 times for 188 yards (4.5 yards per carry).

NC State’s rushing defense has been tremendous in the first two games, allowing just 16 yards on 26 carries to the Spiders. The key item to watch in the contest is how the NCSU defensive secondary holds up against Tajh Boyd. The club is tied for 76th in pass defense in the early going, and Virginia transfer Michael Strauss shredded the team for 300 yards and two scores in a 29-for-45 performance. Tajh Boyd has gotten off to a 32-of-53 start for 439 yards with three scores in essentially one and a half games, and he destroyed State through the air last year, throwing for 426 yards in his club’s victory. If the pass defense does not improve in a hurry, State could be in for a long night against the Tigers.

Program guide: The Tar Heels bounced back from a season-opening loss to South Carolina by defeating Middle Tennessee 40-20 when they last took the field on September 7th. Carolina held MTSU to just 14 yards in the second quarter, taking a 23-0 lead to the locker room. The Blue Raiders bounced back in the second half, outscoring Larry Fedora’s club 20-17 in that stanza. Quarterback Bryn Renner completed 23-of-34 passes for 339 yards with a touchdown and an interception against Middle, and he will need to continue that success against the Yellow Jackets. Three Carolina running backs carried greater than 10 times for 40-plus yards against Middle Tennessee.

Georgia Tech opened ACC play last week by hammering Duke 38-14 at Wallace Wade Stadium. Quarterback Vad Lee completed 8-of-16 passes for 125 yards against the Blue Devils, though four of those passes went for scores. Lee shares the conference lead in touchdown passes (six) with Jameis Winston and C.J. Brown. The Yellow Jackets, for their part, are in the national top ten in four categories (scoring offense, rushing offense, scoring defense and total defense), and Duke tallied just 254 yards of total offense against Georgia Tech’s stout defense, while allowing 469 total yards (344 rushing). North Carolina’s rush defense is 92nd in the nation, allowing 193.5 yards per game, which obviously presents a considerable problem for the Tar Heels. There is a lot of individual talent on defense for Carolina, however, including safety Tre Boston (14 tackles) and linebacker Norkeithus Otis (10 tackles, 3 sacks), and they will be tested early and often by Paul Johnson’s team.

Trivia answer: I asked earlier: Clemson and NC State renew their rivalry on Thursday. What is the name of the rivalry, and in what year was that name created?

This rivalry is called the Textile Bowl, and it was first played under that name on October 24, 1981. Clemson defeated NC State 17-7 in Memorial Stadium en route to the 1981 national championship, the most recent title for the school.

It seems that here lately,it is the Clemson Tigers who headline the week of play.Clearly they are the class of the conference,with Fla.St.,Ga.Tech,and possibly the Terps hanging around at the next level.It will be interesting to see who is around at the end of the season to accept bowl invitations.
As usual,you have written a very comprehensive look at the games to come this weekend.Thanks for you insightful look at the conference through the eyes of a pro.